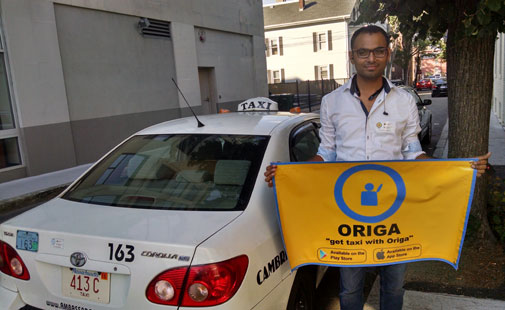 Prabhdeep Singh, a co-founder of the taxi-summoning app Origa, in a provided photo.

There’s a car service Cambridge riders can summon with an app that has no surge pricing and even offers a 25 percent discount off the cost of every ride. It’s called the taxi, and the app is called Origa.

Launched last month by brothers and Cambridge taxi drivers Prabhdeep and Paramveer Singh, the app is available for free on the Apple and Android app stores and available for free to cab drivers as well. The brothers have 30 cab drivers in Cambridge from different companies and one in Somerville. “As demand grows, we’ll add drivers,” Prabhdeep Singh said. Expansion is expected into Arlington, Belmont, Medford and Watertown, as well as further into Somerville.

Origa arrives some four years after the Uber invasion, and is hardly the first time the taxi industry or entrepreneurial outsiders have tried to compete directly with the unregulated car services. Such apps are being tried in several large cities, and one call Arro plans to launch soon in New York and head to Boston. Most have millions in startup funding.

“A lot of customers talk about how ‘We don’t see a future for Origa.’ People don’t want to come back to taxis,” he said, reciting complaints about such things as inefficient rides and dirty vehicles. But the app has a feedback feature meant to raise cabs to the quality expected in Ubers. “We do have a rating system, and very strict guidelines – like drivers shouldn’t be on the phone while driving, and should keep your car clean. If a rating goes below a certain point, the drivers will lose the right to work with us.” 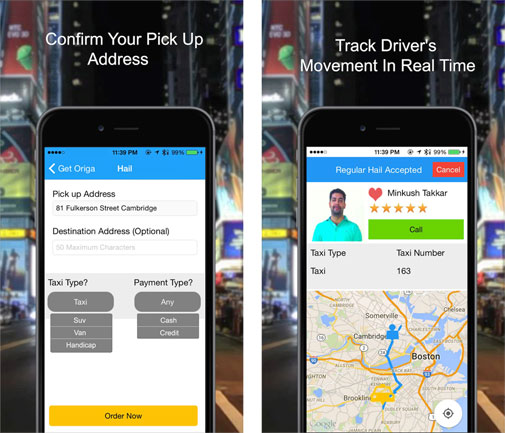 A screen capture from the Origa website shows some of the features of the taxi-summoning app.

There is also a support email address on the app, and Prabhdeep Singh assures riders “We are good listeners.” Customer feedback and more use will iron out some clunkiness in the sign-up process and the self-funded, India-made app’s ability to pinpoint addresses swiftly, he said.

It works much like the apps for Uber, Lyft and other on-demand services whose sleek cars and technology have been giving the taxi industry fits: A user signs up, logs in and presses a button to hail a cab – specifying whether a traditional sedan, SUV, van or vehicle equipped for a disabled person is wanted, which is important in competing with companies that have been notoriously unfriendly to the disabled. The app lets users specify whether they plan to pay with cash or a credit card, because Origa is awaiting a bigger customer base before upgrading to the seamless experience of expensive, app-driven payments. That step is expected in October or November.

Cutting out the dispatcher

Prabhdeep Singh is aware other taxi apps have been tried. Origa stands apart because most industry apps have hails “go through a dispatcher. So it’s basically like picking up a phone,” he said. “Our app cuts out the need for dispatchers.”

Donna Blythe-Shaw, a United Steelworkers representative for taxi drivers who helped form the Boston Taxi Drivers Association, calls the removal of the dispatcher key to the industry’s continued existence. “There’s no need for radio dispatchers,” and drivers no longer want or need them – yet taxi medallion owners are mandated to pay into the so-called radio associations.

The labor group has been demanding that the radio associations be disbanded. In the meantime, “we requested that radio associations two years ago develop 21st century technology to connect with passengers for the cab industry,” Blythe-Shaw said. When that failed, some 18 months ago they asked Boston to put out a request for proposals for a citywide app. Chicago began talking about a universal taxi app since October 2014, and the administration of Mayor Rahm Emanuel launched a company selection process in May.

“The City of Boston can’t organize or plan itself well enough, and the Hackney Carriage Unit [of the Boston Police Department] is either incapable or incompetent. What Hackney’s now looking at, and this is typical, is, ‘What did New York do?’” she said. The answer: New York has an app coming out from Creative Mobile Technologies and VeriFone, the companies that run cab credit card processing. “Is there a history? Yeah, there’s a history of ineptness. But there’s no history of innovation in technology.”

“It’s very unfortunate, because the small owner-operators and the drivers are suffering from the ineptness,” she said.

Blythe-Shaw credited the Singh brothers with stepping into the void.

“These two guys have gone out on their own to do something, and I think it’s great. They’re trying to provide the technology that the customer wants,” she said. But as long as the industry remains regulated, “it’s the responsibility of regulatory authorities to do that, and this is just another indicator that system is broken. It’s clear the regulatory agencies have fallen down on the job, whether it’s the Cambridge License Commission or the Boston hackney unit.”

The License Commission proposed regulations for taxi competitors and drew a firestorm of protest at a June 2014 meeting. But the proposed regulations were never raised again, and it was only three months after that controversial meeting that the commission took steps to ensure that taxis take credit cards – an achievement cited as a point of particular pride by the just-retired chairwoman of the commission, Andrea Spears Jackson, according to the Cambridge Chronicle.

The Singh brothers experienced the failure of city officials firsthand, Prabhdeep Singh said, explaining that he had been encouraged to reach out to innovation-minded city councillors Nadeem Mazen and Leland Cheung, and wound up talking with Cheung.

The answer from Cheung was disappointing: “At first he was very interested in hearing about it,” Prabhdeep Singh said. “But he said, ‘The city doesn’t help startups.’”

A request for help connecting with other resources brought a promise he would speak with other councillors, “but I never heard back,” Prabhdeep Singh said. The brothers never spoke with Mazen because they were already in touch with one councillor, and “sort of assumed they work together.”

“I don’t think there is an interest. We are on our own,” Prabhdeep Singh said.

Cheung confirmed meeting with the Singh brothers, but said he did offer help, connecting with others in the taxi industry. “I encouraged them to get out in the market and work directly with the cabs,” Cheung said.

Now that the Singh brothers have the app available for downloads and plan a small advertising campaign, Prabhdeep Singh finds encouragement in his experience with the app’s name. “Origa” is Latin for “charioteer” or “driver,” and although it was hardly the brothers’ first choice, Prabhdeep Singh has come to like the sound of it.

“Users say they like it too,” he said. “It’s something different.”