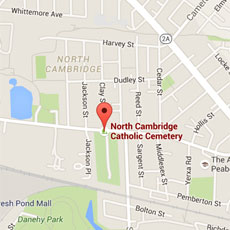 Cambridge Police are looking for two men involved in a stabbing that followed a reported attempted robbery Friday night.

A 27-year-old Boston resident, in town to meet a woman he had connected with on Facebook, was approached at around 8:46 p.m. Friday at a location he described as being by the North Cambridge Catholic Cemetery on Rindge Avenue, a police press release said. Two black men wearing dark clothing approached and tried to take the victim’s gold chain.

When the victim fought back, police were told, he was stabbed in the back with a knife or other sharp object. He got himself to the Taylor Square Fire Station nearly a mile away on Garden Street – gold chain still in his possession – where he was treated by the Cambridge Fire Department for non-life-threatening injuries and met with police. He was taken to a local hospital.

The victim never actually met with the woman, police say. He said he was unable to identify the suspects.

There are also reports of a Boston man being stabbed Oct. 13 in Union Square, for reasons that are less clear and with no description given of the attacker. This victim brought himself to Cambridge Hospital.

There have been at least seven stabbing attacks in Cambridge and Somerville this year.