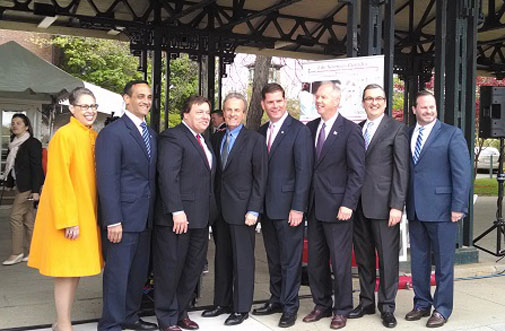 Aside from geographical proximity, the six participating cities and towns joined the compact because of their common identities and challenges, a joint press release said. Last May, leaders in Cambridge, Somerville, Boston, Quincy and Braintree announced the formation of the Life Sciences Corridor to promote the robust life sciences sector along the MBTA red line in the Greater Boston region.

The need for regional transportation solutions has long been a topic in Cambridge, which is growing rapidly in population and is mid-development boom, and issues about traffic resulting from “people traveling who have no origin or destination in Cambridge” was noted Monday at a City Council meeting by Joseph Barr, director of Traffic, Parking & Transportation.

“As much as we do our best to try to get people not to drive, it really depends on more of a regional approach,” Barr said. “That’s not an easy one to solve.”

The municipal executives and their staffs will meet to strategize and solve common issues, the officials said. As part of the compact, each participating city will explore committing funds to hire a full-time staff member to work with all participants and help develop a strategy for economic growth. In addition, a Regional Compact coordinator will be hired to develop a regional economic development strategy.

“Economic challenges and opportunities for our region do not stop at our city borders. From transportation to housing to addressing sustainability and climate change, if we are to succeed as individual cities as we face 21st century challenges, we must develop our strengths as a region. This compact is an important first step in doing so,” said Mayor Joe Curtatone of Somerville.

In addition to the staffing requirements, the compact commits each participating city to principles including meeting at least every other month and establishing a formal structure for the group; serving as a forum for participants to discuss regional economic development and related critical regional issues; reviewing progress made and challenges encountered regularly; and welcoming and encouraging other communities in Greater Boston to support and join the effort.