One dead, one hurt in late-night shooting outside Mount Auburn Hospital (update) 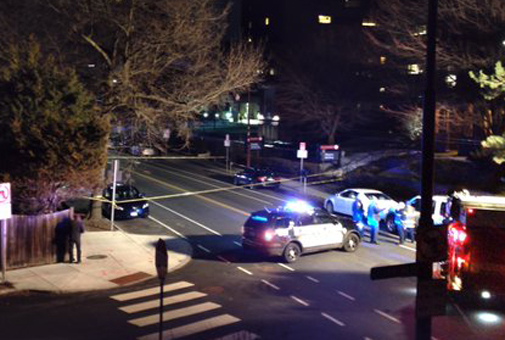 One dead, one hurt in late-night shooting outside Mount Auburn Hospital (update)

Two men were shot outside Mount Auburn Hospital late Tuesday, according to police reports. They were taken to local hospitals to be treated for “serious” injuries.

The man who died has been identified as Armando Hernandez Jr., 30, of Belmont, Kelly said. The second victim is being treated at a Boston hospital.

Police were dealing with a lot just after 9:57 p.m., as reports came in of either three or four gunshots ringing out and a man lying bleeding between the hospital and the houses across Mount Auburn Street. There were briefly rumors of a third victim who had been delivered to the Mount Auburn Hospital emergency room, as well as a second multiple-person shooting at the Apple Cinemas in Fresh Pond. Neither were borne out.

In reports that turned out to be accurate, about 25 minutes after the shooting came a call to deal with a “fully involved” car fire only about a half-mile away on Coolidge Avenue, between the Mount Auburn and Cambridge cemeteries. The two incidents, so close together geographically and chronologically, raised questions that they were related.

“It is not clear whether the incident involving the car is related to the shooting incident,” Warnick said.

The combined crises brought Cambridge, Watertown and state police and fire personnel to the West Cambridge scenes and closed down Mount Auburn Street to traffic for an investigation, diverting Mount Auburn Hospital traffic to a side street.

The car fire was knocked down swiftly, and personnel began to clear the scene at about 10:45 p.m. The action quieted down on Mount Auburn Street as well.

There were early reports of witnesses and a suspicious figure in a dark sweatshirt and hood, but an official on the scene said the area had been “too dark for a witness to see.”

In an email after the shooting, police called it a “very active and open investigation” and urged anyone with information to call Cambridge Police at (617) 349-3300.

This post was updated March 23, 2016, to add information about the health of the victims and comments by Warnick as well as to correct that the shooting happened late Tuesday.