‘Demolition’: With his happy life destroyed, up-and-comer starts tearing down the rest 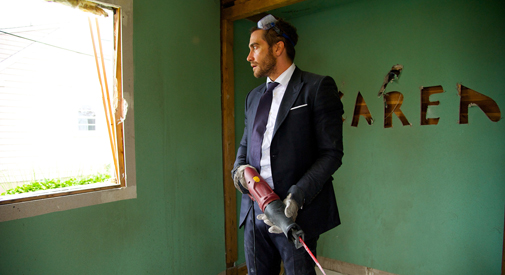 ‘Demolition’: With his happy life destroyed, up-and-comer starts tearing down the rest

Lives interrupted and sent askew have always resonated with filmgoing audiences – less for the lurid train wreck of having it all and losing it, more so for the painful and cathartic process of clawing one’s way back up. The tried and true trope has been floated in wildly diverse cinematic incarnations over the years. The most obvious are the ones that dance around the boxing ring (“Rocky”) where getting flattened is an inherent way of life, but it’s also clearly imbued in Frank Capra’s timeless Christmas classic “It’s a Wonderful Life” and even the comical bum-beats-bond trader dissertation on income inequality, “Trading Places.” 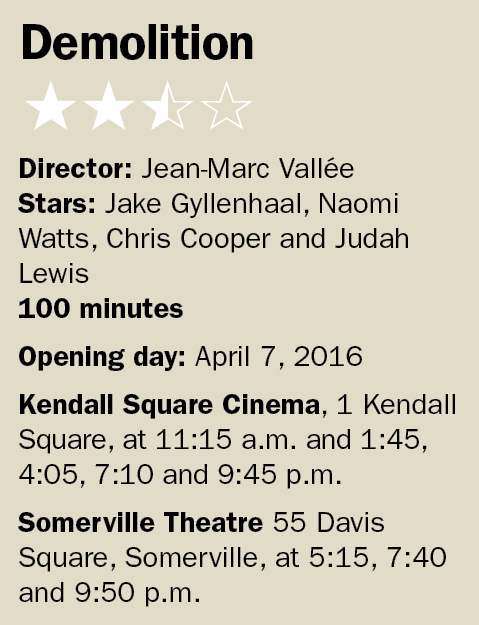 Like George Bailey, Jake Gyllenhaal’s Davis Mitchell in “Demolition” has had his challenges. He’s been up and down so many times it’s hard to keep track of where he’s been and where he’s going. “Demolition” begins with Davis and his wife Julia (Heather Lind) in the middle of a heated conversation as they roll down the avenue. What can we tell? They’re an attractive pair, she’s fiery and they’ve got a plush luxury ride, and then just like that, boom, out of nowhere another car rips through the passenger side and she’s gone. Back up and rewind.

In the fractured aftermath we learn that Davis came from the wrong side of the tracks, but married well in Julia – her father (a somber Chris Cooper) runs a successful investment firm and gives his son-in-law a nepotistic roost that he handles well. For all the money and success, however, Davis, in flashback as much in the present, registers unanchored, unhappy and numb with an edgy brew of inner turmoil simmering up against the boiling point.  He’s in as much need of a therapist as Christian Bale’s untethered screenwriter in “Knight of Cups.”

Three things happen: Davis refuses to sign the legal documents necessary to start a scholarship in his wife’s name; he goes on a letter-writing crusade against a vending machine company because the $1.25 he inserted for a bag of M&Ms in one of its machines didn’t return the promised treats; and, one day, in banker’s coat-and-tie after being instructed to take some time off, he pays a demolition crew a few hundred dollars to help them out.

Clearly what we’re supposed to believe is that Davis is working out his issues through manual labor and, as a result, begins to realize his lush life and marriage to Julia was a sham. This triggers a series of angry affronts to his father-in-law, whom Davis seems to blame for the tortured malaise he’s mired in. The anger at times is so sharp and mean-spirited that Davis comes dangerously close to losing our sympathies. Cooper’s father-in-law may be a stiff cup of joe, but one-percenter or not, these are grieving parents who deserve – in the very least – a modicum of compassion.

Meanwhile the confessional letters to the vending machine company spark mutual intrigue between Davis and the woman who reads them (Naomi Watts). She calls him one night at 2 in the morning, but remains aloof to his pleas to meet for coffee. They do eventually meet, but things are a bit complicated; she’s involved with the owner of the vending company and has a child. It’s also here that “Demolition,” directed by Jean-Marc Vallée (“Dallas Buyers Club” and “Wild”) and written by Bryan Sipe, takes some chances – not all good. Watt’s Karen fades from the fore nearly as soon as her faces graces the screen and it’s her barely teenage son Chris (Judah Lewis), serving a school suspension and struggling with his sexuality, who gets the intimate moments with Davis. Their activities involve sledgehammers and a bulldozer, which they employ to take out their frustrations on unsuspecting furniture and facades, and for good measure they horse around some with firearms and flak.

Davis and Chris tear it all down, but there’s no epiphany or new foundation to be found among the rubble. The underlying trappings of “Demolition” in less capable hands may have come out boilerplate drivel, a Nicholas Sparks adaptation replete with a happy ending tacked on, but Vallée, ever a plumber of the human condition, digs in and veers to the left every time a cliché appears on the horizon – though not all are not avoidable. The ambitious undertaking gets a big boost from Gyllenhaal, who, given Vallée’s ability to garner best-acting nods upon his stars (Matthew McConaughey and Reese Witherspoon), likely jumped at the project. He’s right up there with McConaughey, Tom Hardy and Michael Fassbender as one of the most interesting and edgy male leads in film today. His last outing, “Southpaw,” where he also lost a wife and took it on the chin, failed to leverage the quirk and cadence Gyllenhaal so effectively demonstrated in his prior effort, “Nightcrawler.” But in that film, Gyllenhaal was playing a sociopath; here he’s playing someone arguably more rooted and nuanced. The actor and the film hit brash chords as Davis bashes things in and ducks and grooves his way through crowded streets teeming with suit-wearing zombies. It’s an energetic see, full of emotional titillation and apathetic conclusion.