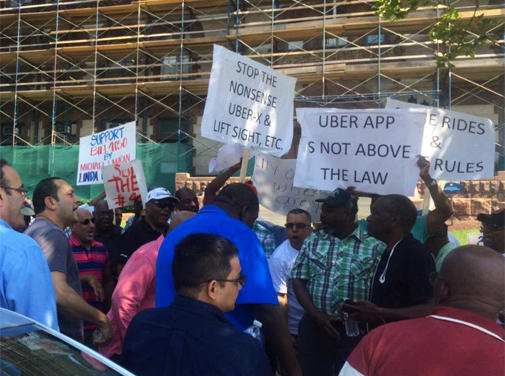 Taxi drivers protest outside Cambridge City Hall in August in a section of a photo posted on Twitter by Liza Behrendt. Click on the image to see the original tweet.

The Cambridge Taxi Drivers and Owners Association sued the License Commission in federal court June 30, demanding that the commission enforce its taxi regulations on Uber and Lyft, rather than allowing them to keep operating without significant regulatory burden. The suit was first reported by the Cambridge Chronicle.

The lawsuit comes 18 months after a similar lawsuit filed by the Boston Taxi Owners Association against the City of Boston, and while the state Legislature is looking at options. In the Boston case, federal judge Nathaniel M. Gorton ordered at the end of March that Boston identify what regulations it would adopt, independent of state law changes, and to “show cause” why the court should not order it to apply current regulation to Uber and Lyft and other so-called “transportation network companies.” Boston has until Sept. 30 to comply.

Jenifer Pinkham, the attorney who represents the Boston and Cambridge taxi associations in these cases, said the lawsuit is being filed now because Cambridge has told the drivers it doesn’t feel it needs to abide by Gorton’s ruling in the Boston case, because Cambridge is not a defendant. “The taxi medallion owners got together to bring their own lawsuit,” she said.

The suit asks the court to declare that current regulations are binding on Uber and Lyft, to require Cambridge to enforce them, and to grant damages to the taxi drivers to compensate them for the loss of revenue they have incurred. The suit claims that the city is violating the drivers’ “constitutional rights to just compensation, equal protection and due process” by requiring they buy medallions costing hundreds of thousands of dollars, then enforcing a “vast set of regulations” on taxi drivers but not drivers for Uber or Lyft.

City councillors agreed a year ago that it was important for Uber, Lyft and other companies to be identified as livery services, “because that’s what they are,” in the words of councillor and now mayor E. Denise Simmons, but opted against enforcement of relevant laws. It drew only spoken protests at the time.

Gorton has been assigned the Cambridge case as well, because the two cases are related and cover many of the same issues. Pinkham said she was hopeful he would issue a similar order in the Cambridge case as the Boston case, requiring Cambridge to explain itself or start to enforce its regulations against Uber and Lyft. Pinkham has moved for a preliminary injunction to require it.

Pinkham also hopes the judge will accept an argument dismissed in the Boston case, but which she has buttressed with additional evidence: that allowing Uber and Lyft to operate is an unconstitutional “taking” of property without compensation, because the city has removed the exclusivity associated with medallion licenses, thus devaluing them.

Cambridge Director of Communications Lee Gianetti said in a statement Tuesday that the city “has just been made aware of the filing of this lawsuit and our city solicitor will review it and prepare our response. We regret the taxi industry felt it had to take this course, especially after the conversations we have had with the taxi industry regarding this matter and our commitment to diligently work to make regulatory changes so that all transportation services are treated fairly.

“In addition, even though the city is aware that the state Legislature is considering the development of uniform regulations statewide, the city’s License Commission has decided not to wait until that process is complete and has already drafted internal changes in order to create uniform regulations. These changes are being reviewed by our legal team to ensure compliance with current state and local laws. The License Commission is committed to doing everything in its power to ensure that regulation of all such services will be done in an equitable manner and to ensure the public safety of all residents of and visitors to Cambridge,” Gianetti said.

The status of Cambridge’s efforts to change its regulations is not clear. Last summer, the City Council passed a trio of policy orders and policy order resolutions, including one asking the city manager to think about a moratorium on taxi fees in the interim, but also to defer to the state’s legislative process. The moratorium never made it onto the city manager’s Awaiting Report list, but presumably was allowed to expire in December at the end of the legislative term without action.

In October, the council passed an order asking the manager and police commissioner to confer about enforcing the hackney ordinance. It did expire in December, without action.

The License Commission has been trying to figure out a process to amend its liquor regulations since April – another area in which businesses buying expensive licenses are seeing values plummet as alternatives are introduced – and finding confusion among local businesses about the intent and effect of the new regulations, as well as uncertainty about whether they require approval of the City Council or merely passage by the three-member License Commission itself.