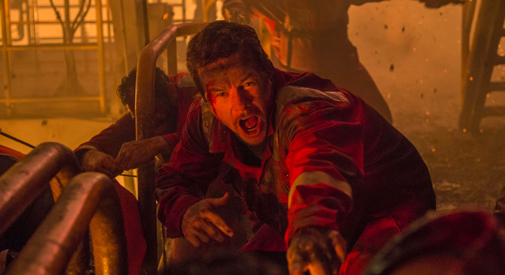 If you’re still pissed at British Petroleum for the 2010 spill in the Louisiana Bay that notched the worst ecological disaster in history, get ready to have your ire stoked by Peter Berg’s harrowing real-life rewind. You won’t get many of those indelible images of oil-matted pelicans and mounds of dead fish piled along the coastline because, much like “Snowden” and “Sully,” other recent docudramas depicting barely faded news flashpoints, “Deepwater Horizon” steers clear of what we already know and lays out the events and lives leading up to the unthinkable – which it does with meticulous care. 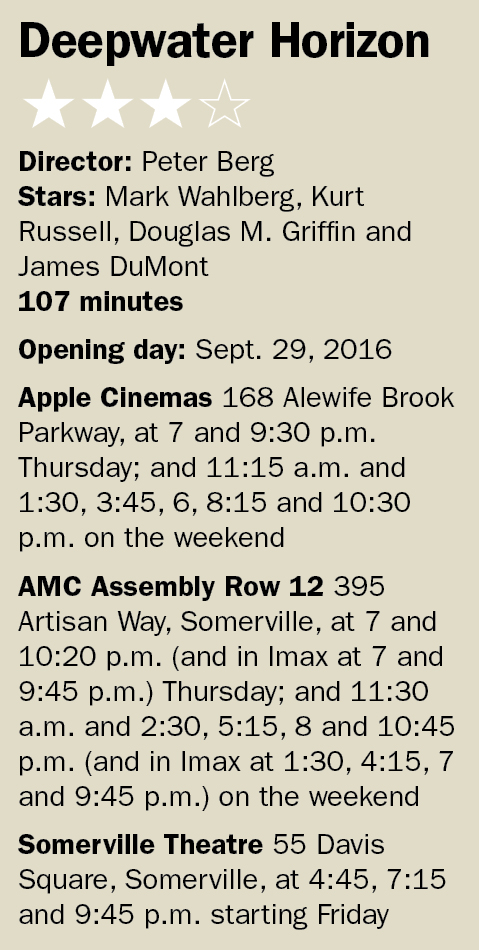 At its core “Deepwater” is a disaster flick, and a nail-biter to boot, but much of what propels it are the human stories, the selfless actions of those caught in the way of harm and the shocking arrogance unfurled by British Petroleum higher-ups wanting to turn a fast buck. The film hangs on two caught at the epicenter of the ordeal: Kurt Russell’s rig commander, Jimmy Harrell, and Mark Wahlberg’s second-in-command, Mike Williams. These are two actors who in recent outings – “The Hateful Eight” and “Lone Survivor” – were left bloodied and beaten, and worse, which in hindsight must have been preparation for what would come: asphyxiation by gushing oil, shrapnel whizzing at every turn and a few ungainly forays into parkour as one incinerating part of the rig lists and crashes downward; and if you think the sea a good exit, it’s nothing but a pool of fire for as far as one can see.

The great backstory here is that the Deepwater Horizon is a rig for rent, and the pushy BP strategists on site (lead by a perfectly wormy John Malkovich, whom I wish had more to do in the film) – seeing that the tapping of the black gold is weeks behind schedule – dismiss standard tests and order immediate pumping. This doesn’t sit well with Harrell and Williams, and you know the disaster that looms, but you don’t know to what degree. Berg, who lost some cred with the “Transformer”-esque “Battleship,” has been down the road of harrowing and human suffering before with “Lone Survivor” and “The Kingdom,” and there’s the upcoming “Patriots Day,” working again with Wahlberg to tell the story of the tragic Marathon bombing that left blood in the streets of our beloved Boston.

The actor-turned-director knows how to tap into the pain of loss and the moment of humans challenging themselves to do the right thing for their fellow man, even at a cost to themselves. Russell and Wahlberg are authentic as men in charge who take their responsibility with great seriousness. Kate Hudson adds back-home warmth as Williams’ concerned wife, and Gina Rodriguez scores a breakout as the lone woman on the rig and Harrell’s trusted go-to in the command center.

The great achievement of “Deepwater Horizon” is its ability to score as a thriller and tale of character and perseverance as well as a historical plumbing into the negligence and avarice of corporate bagmen who, with their feckless decision decision to skip down the checklist and drill, light up the Horizon platform like a Roman candle and kill several hard-working men in the process. It’s criminal – a point “Deepwater Horizon” makes with subtle searing poignance.