‘Don’t mess it up,’ but more transparency, goes Bard’s pitch for police commissioner

‘Don’t mess it up,’ but more transparency, goes Bard’s pitch for police commissioner 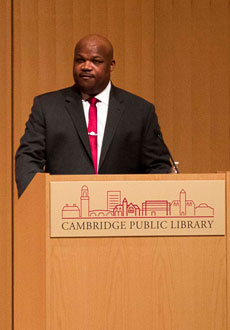 Prepared speech. Prepared answers to prepared questions. Whisked out the door at the end without a meet-and-greet. Asked not to answer questions from the media unless he’s selected.

Branville G. Bard Jr., the sole remaining finalist for police commissioner, introduced himself to the city Tuesday night at a small forum at the public library. City Manager Louis A. DePasquale introduced Bard, who spoke for 25 minutes and did 15 minutes of question-and-answer with human resources director Sheila Keady Rawson, running through questions delivered to Bard in advance.

“I think I bring a lot to the table,” Bard began. “In addition to being a fresh set of eyes, I bring with me a transformative vision. Cambridge is the national model for progressive policing. I want you to know that’s not going to change under my leadership.”

About half the forum attendees were city employees, and a lot of police officers turned out.

“I was impressed with his forthrightness,” Devereux said. “I feel like he certainly has done his homework about what our values are, what our strengths are, what our opportunities are; and he seems to really want to further what we’re doing – and not mess it up, which I appreciate.”

Kelley declined to articulate an opinion on Bard, saying he put full faith in DePasquale to handle the selection process.

Mazen said the forum wasn’t what he expected: “In the future, with all types of high-profile appointments, I would have more interactivity.” But Mazen said he thought it was a strong process so far, and “I liked a lot of what he had to say tonight.”

Bard is 46 years old, black, born and raised in Philadelphia, where he is chief of the Philadelphia Housing Authority Police Department. He has three children: two adults and a 7-year-old. “The prospect of picking up and moving my family to a new city is both exhilarating and intimidating at the same time,” he said.

Bard affirmed a commitment to the Cambridge Police Department’s five-year plan, developed by Commissioner Robert C. Haas and followed by two acting commissioners since, Chris Burke and Brent B. Larrabee. But he would also institute a three-year review of how the department delivers community services.

Bard stressed the importance of maintaining and improving the “legitimacy” of the police department, by increasing accountability and transparency. Significant use-of-force incidents should face interdisciplinary review to avoid skepticism from the public and officers, Bard said. Police expect to see officers involved in a review for it to be legitimate; but civilians expect to see civilians involved. Bard said including civilians, officers “and a member of City Council, even” would produce findings “far more likely to be seen as legitimate.”

“I’ll have courage to say when I think they have done wrong,” Bard said of officers in his command, “so they need to know I’ll have the courage to back them up when I believe they haven’t done any wrong.”

Brad noted that “as traditional authoritarians, managing change in a police department can be extremely difficult. The police officer can be incredibly obstinate when it comes to change, especially when that change can be seen as limiting authority or increasing accountability. It’ll be incumbent upon me as a police commissioner and our entire executive team to show all personnel the benefits of this approach.”

But “operating under a microscope is difficult,” Bard said. “It is incumbent upon us to ensure our members are enlightened  – that they experience total wellness by maintaining physical, emotional and spiritual health.”

Bard said that it was important to provide police officers with the support to handle what can be one of the most difficult jobs in the world. “Members of this profession are continually exposed to imagery that no human being should see, and that no human being can encounter without being harmed emotionally,” he said.

With respect to youth, “I want to see us evolve to the point where we see it as a personal failure every time we arrest a juvenile,” Bard said. He said he preferred an approach that tries “intervention and diversion” and “leaves arrest as a last resort.”

“In many ways it may be impossible to quantify the future harm done by unnecessary juvenile arrest. But we also know that simply not arresting them without providing support services isn’t the answer either,” he said.

Bard said repeatedly that for many of the department’s programs, the system doesn’t need much change: “The best approach may be not to mess it up.”

Different from past process

With the 2016 city manager selection process fresh in minds, the differences in this process were striking. At the public forum for city manager in September, which led to DePasquale’s hiring, questions were solicited from the public in advance, three candidates were shown off against each other and the public had the opportunity to mingle with them afterward.

DePasquale said that the commissioner screening process narrowed a pool of 39 applicants to five semifinalists, and then to two finalists. But one dropped out, leaving Bard.

“I do want to be clear, I have not made my final determination,” DePasquale said. “It is my decision, but it is all of our decisions.”

The forum was recorded by 22 CityView, which hoped to have the video available on YouTube within a week. Many other government entities are able to post video in real time, or within a day, rather than a week.