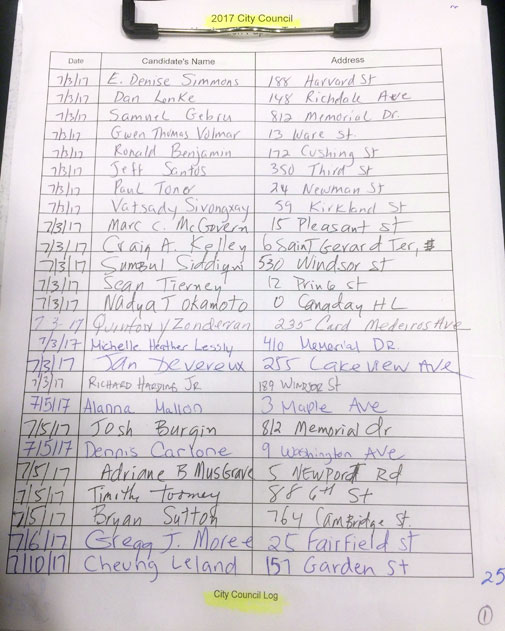 Midway through the month election nomination papers become available and must be filed, there are 29 potential candidates for City Council and a dozen who already have enough certified residents’ signatures to run.

On the School Committee side, there are a dozen potential candidates and four who already have enough certified residents’ signatures to run.

While the number of committee candidates is fairly standard – there were 11 people running in 2011 and 2015, and an even 10 back in 2001 – this is the largest field of council candidates at least back to 2001, according to the records on Robert Winters’ Cambridge Civic Journal website. The previous record within recent elections was 25 in 2013; the lowest number running was 16 candidates in 2007.

The council has nine seats, including two known open seats this year; the committee has six seats, with none known to be open.

Since the rush of nomination papers withdrawn on July 3, the first possible day, a dozen council nomination papers have been taken out, including by three incumbents, three candidates known from years past, several people who announced plans to run earlier in the year and three entirely new names: Josh Burgin, a Memorial Drive resident; David J. Stern, of Follen Street; and Bryan Sutton, of Cambridge Street.

Burgin is owner of Zucchini Software in Florida, where he has worked on political campaigns, as a staff member in the Florida House of Representatives, as a legislative aide to a county commissioner and as a gubernatorial appointee to a transit authority, according to his LinkedIn account. Stern is an environmentalist and composer who combined his interests by founding Song for the Earth, which he hoped would funnel proceeds from the sale of concert tickets and recorded music to ecological nonprofits such as the Sierra Club. Sutton is a tech and logistics expert at Siemens.

Candidates can file between 50 and 100 residents’ signatures to ensure they reach the 50 that are needed. The maximum number of signatures were filed by Nadya Okamoto, a 19-year-old Harvard student and founder of two nonprofits; 86 of those were certified by the Election Commission. She was outdone in a way by Alanna Mallon, founder of the Cambridge Weekend Backpack Program, a program director at the Food for Free nonprofit and former education liaison for the last mayoral term of councillor David Maher, who filed 99 signatures and saw only six that failed to be certified – leaving a 43-signature cushion, if such a thing were necessary.

On the cooly practiced side of things, Mayor E. Denise Simmons filed exactly 50 signatures back on July 6, and each one was certified.

School Committee candidates include all six incumbents (though Richard Harding has taken out papers for a potential council run as well) and a possible returning member – Fran Cronin, who served on the committee from 2013 to 2015 and has more recently been a council legislative aide to Maher.

Returning challengers include teacher Jake W. Crutchfield; teacher and parent David Weinstein; and health care worker and former Cambridge Public Schools student Elechi Kadete.  In 2015 voting, these candidates finished eighth, ninth and 11th, respectively in an 11-candidate field that included five incumbents. In terms of winning No. 1 votes in the city’s ranked ballot system, Crutchfield got 1,221; Weinstein got 696; and Kadete got 427. (Challenger Emily Dexter was elected after getting 1,402 top votes.)

New candidates are Laurance Kimbrough, a parent, guidance counselor, coach and member of the city’s Police Review and Advisory Board; and Harvard student and recent Cambridge Rindge and Latin School grad Will MacArthur.