Two injured as shots are fired at Carnival, repeat of 2015 incident; fights amid chaos (updated) 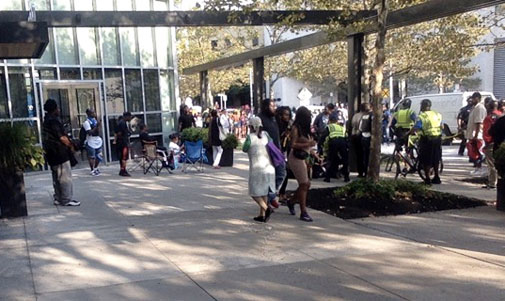 Two injured as shots are fired at Carnival, repeat of 2015 incident; fights amid chaos (updated)

People in Kendall Square react to the sound of gunshots Sunday at the Cambridge Carnival. (Photo: James Williamson)

Two people were injured by gunshots at the Cambridge Carnival in Kendall Square – the second time in three years that nonfatal shootings have taken place at the massive annual festival.

Shots rang out near the main stage of the carnival, around Main and Albany streets, at around 4:44 p.m., said Jeremy Warnick, director of communications and media relations for Cambridge police. The shooting followed a fight. “Officers quickly convened to the area … and located a person of interest, as well as a firearm,” he said.

Michael Coleman, 23, Dorchester, was taken into custody and will face charges.

Despite reports from the carnival scene, “rhe person of interest did not have any injuries before being taken into custody,” Warnick said.

Still, at 5:22 p.m., police shut the carnival down – more than an hour and a half early – and the scene was cleared of people. Police Commissioner Branville G. Bard later held a press conference at the scene.

Other incidents added to the chaos, including reports of shots fired at 5:18 p.m. at River and Cottage streets and, two minutes later, at River and Pleasant streets.

Reports of six male teens running down William Street and then onto Cottage drew police attention, though a witness said a single man in his 20s, seen running up River Street, was the sole shooter. According to scanner reports, the teens were seen arguing, and there were later reports of the teens being shot at by people in an SUV.

A woman living on William Street reported finding bullets inside her unit, shot from outside. A firearm was recovered from this crime scene as well, Warnick said.

Adding to the flurry of incidents, at 5:35 p.m. came reports of 20 kids fighting outside the Chipotle fast-food eatery in Central Square – then, moments later, at the nearby Carl S. Barron Plaza. Some three hours later, Warnick said police were “still dealing” with some post-festival skirmishes, which have become expected in the past few years. 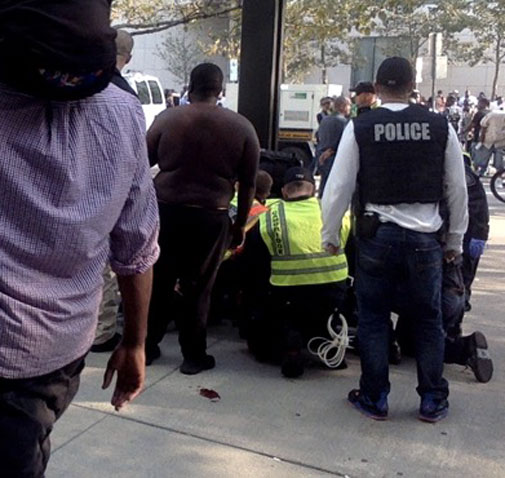 Police handcuff a man in the aftermath of a Cambridge Carnival shooting Sunday. (Photo: James Williamson)

“We can’t definitively say there’s a direct connection, but there’s a presumption of a possibility,” Warnick said of Sunday’s fights far from the carnival grounds.

The Cambridge Carnival follows the Boston Carnival, and Boston police brief Cambridge police on whether there’s cause to be extra alert as violence or a confrontation from one event might lead to a repeat at the next. “It helps prepare us in terms of potential players,” Warnick said. But this year, “we didn’t have any known concerns going in.”

There have been several outbreaks of violence at recent festivals, Warnick said.

Last year, four Boston men were arrested on charges of disorderly conduct and resisting arrest after three separate fights in Kendall Square during the festival. A Dorchester woman was slashed in the face during a 15-person fight in Central Square afterward.

In 2015, as the 23rd Annual Cambridge Carnival International Festival and Parade wended its way through Central Square on its way to Kendall Square, shots were reported, along with reports of a white car speeding away with the suspected shooters. The victim was a Roxbury woman, injured in the foot. Meanwhile, two men were arrested on charges of disorderly conduct and assault and battery on a police officer in separate incidents. Despite all this, the festival went on for another hour.

In 2014, a Boston resident was stabbed in the arm during a fight during the festival.

And before 2012, there were “a number of incidents involving firearms, gunshots, drugs, robberies and assaults” around Kendall and Central squares during and after the carnival.

The Caribbean/African-themed carnival, with its dazzling handmade costumes accompanied by food and the music of DJs and bands playing world music, Haitian roots, reggae and Soca, has been known to draw crowds of up to 100,000 people. This is the festival’s 25th year.

The recurring incidents of violence did not go unnoticed by residents and participants.

Every year our carnival get shot uo lol

This post was updated repeatedly Sept. 10, 2017, as information was learned and confirmed.