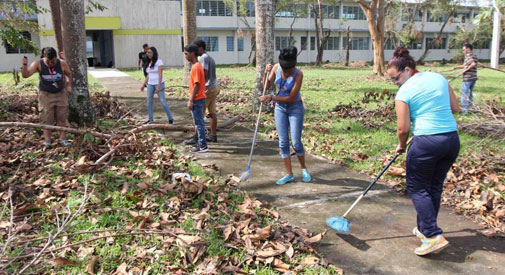 Students volunteer to clean at the Trina Padilla de Sanz School in Río Piedras after Hurricane Maria. (Photo: Alex Figueroa of El Nuevo Dia via Twitter. Click on the image to see the original tweet.)

Along with looking at a school choice glitch that had frustrated parents, last week the School Committee agreed enthusiastically to adopt sister cities in Puerto Rico and help get their schools up and running after hurricane damage. Dovetailing on a City Council initiative to adopt three or four villages, and coming hours after the Puerto Rican flag was hoisted at City Hall, members Manikka Bowman and Richard Harding offered a late motion to focus on education.

Superintendent Kenneth Salim welcomed the initiative and assured that his staff is well-versed at developing sister city plans, noting that he had been at an Armenian sister city event earlier Tuesday.

Salim also assured that his staff is preparing to welcome any and all students and families affected by any of the hurricanes, even if they come with incomplete documentation, and spoke of efforts to alert staff and students that services are available to anyone experiencing “stress anxiety.”

An attempt to fix an unintended consequence of encouraging enrollment in language immersion programs was pushed to a Nov. 21 meeting. Although member Patty Nolan presented what she hoped was her community relation subcommittee’s solution, she asked that a vote be postponed until the affected schools could have time to discuss the proposed changes – not realizing the committee would change its schedule so the next regular meeting would be weeks later. She ultimately agreed that a November date wouldn’t jeopardize changes to the January lottery.

The issue was change in recent controlled choice rules to allow “internal transfers” into the Chinese Immersion and Olá Portuguese program at the Martin Luther King and King Open Schools, respectively – letting non-immersion students in the schools’ other programs transfer to the immersion programs before assigning siblings or running the January junior and kindergarten lottery. The goal was to encourage enrollment in the programs, especially for the non-immersion Chinese Ni Hao program students.

It turned out, though, that some younger siblings of students already in the immersion program were shut out of the January 2017 lottery as a result – unheard of in Cambridge where siblings have priority in registration. It was particularly unfair, families contended, to siblings born after the March 31 cut-off, making them ineligible for junior kindergarten – meaning they now were in line behind other children in their grade who could do an internal transfer because they were born before March 31 and therefore were junior kindergarteners in the school.

The proposed solution is to prioritize sibling registration, only then followed by internal transfers. Internal transfers must be completed before the January lottery. The change got support from Chinese Immersion parents Nancy Wei and Danielle Buie. Wei said this will “spare future families the heartbreak” that she and others experienced when their youngest children were shut out. Her son had been 14th on the wait list last year, she said, even with a sibling already in the program.

When this issue arose in May, some committee members were initially reluctant to take it up, fearing “changing the rules” might open up even more unintended consequences. Kathleen Kelly’s initial impulse was to postpone examining the issue until after the upcoming November election. The committee discussed reviewing the entire controlled choice program, but Nolan, Bowman and Fred Fantini, along with Chief Operating Officer Jim Maloney, convinced all the members to move this specific issue to the community relations subcommittee to “begin fact-finding.” Instead, they came back with a potential fix.

“We mine tons of data,” Harding said. “I’m not exactly sure what your motive is here. How useful will this be for us?”

“We use our data to get a portrait of our district,” Dexter explained. “We have the idea that there is an achievement gap by race,” she said, “but we don’t look further to see the levers.” Noting that across the nation African-American girls typically perform better than African-American boys, having that information for Cambridge – currently not available –  “can give us a more complex picture. And then you can ask why?” she said.

Mayor E. Denise Simmons also struggled with the issue, suggesting that the motion be sent to a subcommittee to “be clear about what we are asking for.”

Kelly cautioned that, although she would support the motion, “we can spend a lot of time looking at data and miss the bigger picture of what I think public education is really about.”

But Fantini embraced the motion, saying his vision is that it will eventually go further and that there will be a “transparent” portal for all of this data open to the public. Bowman agreed, envisioning a “data dashboard.”

Student member Juliette Low Fleury also encouraged passage, saying that in her own research she has been frustrated that she could not separate, for example, girls from boys for different races.

After she spoke, members passed the motion unanimously, amended to allow the superintendent and his staff to initially choose the pertinent categories.

Members passed unanimously acceptance of $4.7 million transfer from the state circuit breaker fund to offset high-needs special-education expenditures and a clarinet for high school music classes; and $630,000 in contracts for out-of-district special education tuitions. Dexter asked if future contract authorizations could be presented with applicable transportation contracts. Kelly said that as head of the special-education subcommittee, she wanted to add that, “I feel very strongly that we shouldn’t emphasize the cost, but the effectiveness of the education that the student gets.”

Also passed unanimously were revisions to the public schools facility policy presented originally at the Sept. 19 meeting, and a Kelly motion asking the superintendent to report on the status of the FY2018 Budget Guide and plans for its distribution to Cambridge residents.

A Simmons, Fantini and Harding motion proposed honoring 47-year veteran teacher Regina B. Keys by naming the Martin L. King/Putnam Avenue Upper School auditorium after her. Having discovered before the meeting that the auditorium was already named, the motion was modified to hang a portrait and a plaque “in the foyer or a suitable public location,” and passed unanimously.

Also passed unanimously was approval of resolutions to be presented to the Massachusetts Association of School Committees board of directors, reported out of the resolutions committee, of which Kelly is member. Many seek to ward off negative effects from federal or state legislation and budgeting, including: a call to file and support legislation to improve state circuit breaker funding to districts for special education; to assess and consider lawsuits against the state “to [ensure] that there will be an adequate level of [financial] support for public schools;” to urge Congress to preserve the Affordable Care Act; to oppose state or federal initiatives to privatize public schools or to pay tuition to private schools – an offensive against using public funds for school vouchers to other schools; and to “restrict the ability of the commissioner, secretary of education or board of elementary education” to take targeted federal funds for their or the department’s own use instead of going directly to public schools.

This post was updated Oct. 9, 2017, to correct the junior kindergarten cutoff date to March 31.