Woman grabbed from behind in Riverside was able to free herself, describe attacker 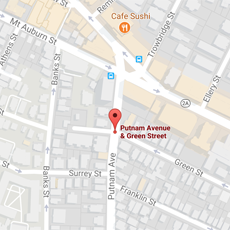 Woman grabbed from behind in Riverside was able to free herself, describe attacker

Police are asking residents to be aware of their surroundings after a woman reported an assault at around 10:15 p.m. Tuesday at Putnam Avenue and Green Street, in the Riverside neighborhood.

The woman was walking down Putnam Avenue from Mount Auburn Street by herself when she felt the presence of someone behind her. As she turned, a man grabbed her around the shoulders and waist, but the victim was able to free herself and ran away, said Jeremy Warnick, director of communications and media relations for Cambridge police.

Her attacker was described as approximately 18 to 25 years old, around 5-foot-10, with a thin build, cleanly shaven with possibly blonde hair beneath a beanie cap.

“While we are actively investigating the facts and circumstances surrounding this incident and are putting extra attention on this area, we have not seen any recent incidents similar in nature to this event,” Deputy Superintendent Leonard DiPietro said. “Regardless, we want the community to be aware of these circumstances.”

In an attack on a Harvard undergrad in early October, the student was running near Memorial Drive and Western Avenue, again in the Riverside neighborhood, at around 11:50 p.m. on another Tuesday when she was grabbed from behind by an unidentified man. She freed herself by using pepper spray and ran to the safety of one of Harvard’s River Houses.

DiPietro asked anyone with information on the recently reported assault to contact the Cambridge Police Department’s Criminal Investigation Section at (617) 349-3370.

Residents, particularly women who must walk alone at night, are urged by police to stay vigilant and aware of their surroundings; to keep to well-lit routes; make eye contact with those around them; wear sneakers or shoes that allow for added mobility; and avoid wearing headphones or ear buds. A phone should be readily available, but distracting phone calls should be avoided. People who feel they are being followed should show they are suspicious and turn to look at the person to send a clear message they will not be taken by surprise; head for a store or building they know to be open; change directions, either crossing the street and varying your if someone is following by foot or turning and walking in the opposite direction if the person following is in a car.

Walk with confidence on the street and at a good, steady pace. Keep your head up and observe your surroundings. Don’t look down at the ground. Don’t let anyone violate your space. Trust your instincts. Anyone at any time can be a victim of crime, so never assume “It will never happen to me.”

Try to remember descriptive information about the suspect (height, age, race, etc.) to relay to police when reporting the incident.

Keep a whistle within reach. If threatened, use the whistle to signal residents for help. Yelling “Fire!” “Help!” or “Rape!” are ways of drawing attention and alerting people of your situation.