Look for 16 more Hubway stations in 2018, along with bike ads, low-income subsidies 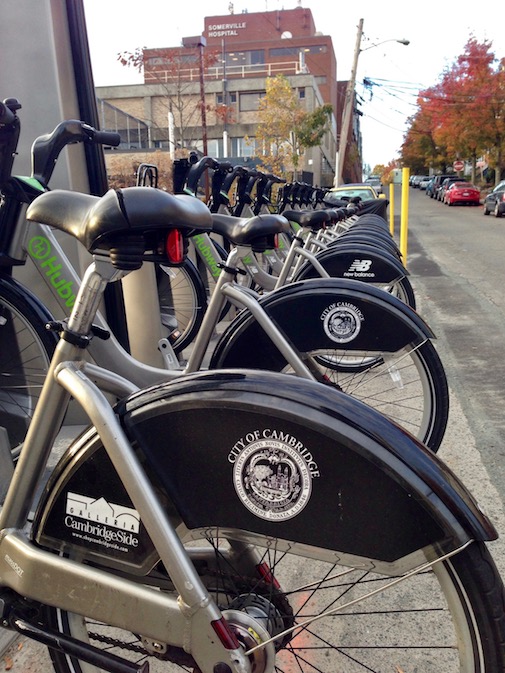 Look for 16 more Hubway stations in 2018, along with bike ads, low-income subsidies

The Hubway bike rental system is moving into a new phase with a five-year contract that takes some $800,000 off Cambridge’s annual budget by leaning less on municipal funding and more on sponsorships and advertising. Bicyclists can also expect to see more stations and bikes pop up and a better deal for low-income residents, but more aggressive removal of so-called dockless bikes that compete with Hubway.

Since beginning in July 2011, Hubway has set up 192 stations throughout Cambridge, Somerville, Boston and Brookline, for a network of more than 1,600 bikes – and Cambridge will continue to see the system grow around the city. Five Hubway stations were added in Cambridge over the past year, for a total of 49 stations, and a hefty 16 more are planned for the coming year, adding 176 bikes, officials said Monday.

Much of that is paid for by developers, demanded as part of special permitting processes as they seek rights to start construction. That has tended to make for a “very privileged” system, city councillor Tim Toomey said. “I’m not sure I’ve seen Hubway stations near public housing. I’m not sure there are any at all.”

But as part of a contract to be signed with the company Motivate, the city gets a certain amount of expansion. “Our intention is that those stations would not go in locations close to where we have development,” said Iram Farooq, assistant city manager of community development, “but that those would go either close to public housing or parks frequented by people in the neighborhood.”

In addition, low-income residents can expect to be offered a subsidy early in 2018 that will allow half-off memberships in Hubway, she said.

Toomey was not impressed by the offering, asking, “If people don’t have access to a Hubway station, what good is that?”

A main and secondary sponsors are being sought to fund operation of the Hubway network, allowing the city to pay for just for some maintenance. There has been resistance to advertising in the past from citizens and some officials, but others called it a losing battle, considering bikes slathered with sponsors’ names get ridden into Cambridge from other cities.

Cambridge and the other Hubway cities gets a say in choosing a sponsor, City Manager Louis A. DePasquale said, “and it will be one that’s appropriate.”

An agreement with a main sponsor – called a title sponsor – could include naming rights, meaning Hubway could be renamed, Farooq said Tuesday.

While Cambridge has been largely alone in keeping Hubway stations running yearlong, even when there’s frequent snow, riders can expect to see more stations kept open this winter in Somerville, Boston and Brookline, though stations set up in streets instead of on sidewalks will still have to be removed, Farooq said.

Expect the few dockless bikes that have been appearing on Cambridge streets to be gone, though. The city solicitor recently sent cease-and-desist letters to the half-dozen or so companies that had been dipping toes into the Cambridge market, leaving behind bicycles that can be unlocked through an app. “We will step up efforts as needed if their activities continue,” city solicitor Nancy Glowa said.

What Glowa referred to as “cease-and-desist” letters reminds companies operating dockless bikes that the city “will not be permitting other public bikeshare systems” and tells them:

“We do need to officially provide notification that you are advised that you do not have the authorization or permission required to operate a bikeshare system within the city limits.”

“We have a license with Hubway. None of these other companies have licenses, and so they are obstructing the roadway … there are a couple of laws that regulate this activity that they’re not in compliance with,” Glowa said.

That seemed fine with councillor Leland Cheung, who deemed dockless bikes “essentially street litter” that has caused “heartache” in other cities. But councillor Craig Kelley, a bike advocate who speaks frequently of getting ahead of the curve on tech trends that will affect the city, called them a likely “wave of the future” that the city should find ways to incorporate into public life.

John Hawkinson contributed to this report. It was updated Dec. 16, 2017, to clarify the content of what city solicitor Nancy Glowa had referred to as “cease-and-desist” letters to operators of dockless bicycles.