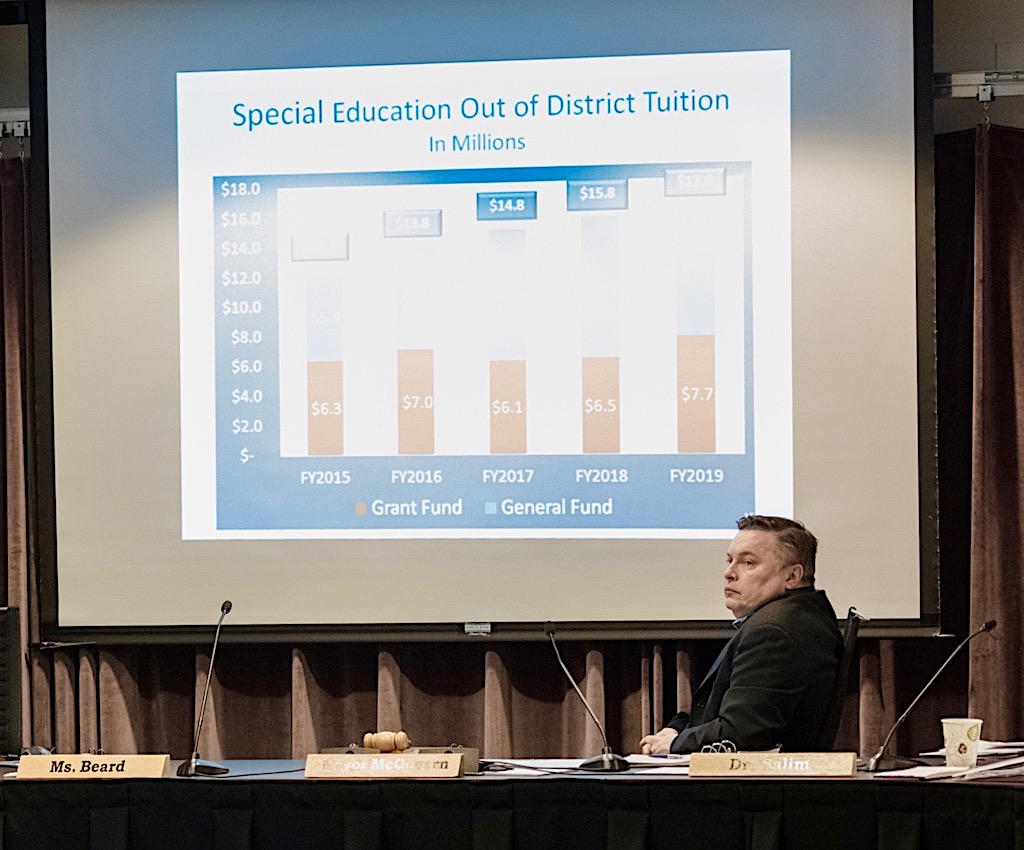 The contentious introduction of two school-focused policy orders this week – about finding more parking for teachers and backing a state bill to bringing back civics education courses – was good timing for the introduction of a Joint Committee of the City Council and School Committee by Mayor Marc McGovern.

The committee will have its first meeting in April, led by McGovern with three city councillors and three School Committee members, as well as school and city staff, the mayor announced in an email late Tuesday afternoon. “This committee does not hold legislative authority,” he acknowledged, but would be dedicated to communication “with the clear objective of creating strong, substantive recommendations.”

“Issues impacting individual students and schools do not happen in isolation,” McGovern said. “Having served multiple terms on both School Committee and City Council, I recognize both the real and potential impacts that decisions made by one body may have on the other. [The committee] will “improve communication on important issues that overlap our two elected bodies.”

Year in the making

The committee will include councillors Craig Kelly, Sumbul Siddiqui and E. Denise Simmons, who was mayor last term and thus is fresh off two years running the committee; and School Committee vice-chairwoman Kathleen Kelly and members Patty Nolan and Laurence Kimbrough. The committee might meet roughly every three months, McGovern said.

The council and committee have been edging toward such a solution for several terms – at least since Kelley, Simmons and then councillor Leland Cheung put a hold on the schools budget in May 2013 because of concerns they felt were inadequately addressed in the $151 million schools budget. The mayor at the time, Henrietta Davis, proposed a roundtable meeting between the two bodies to talk over the issues.

Since then, there has been more emphasis on roundtables, and current City Council rules specify that of the six to 12 roundtables the council hold each year, three will be with the School Committee. Previous joint roundtables have explored charter school issues and the school construction plans.

The backdrop for the announcement were the policy orders heard Monday by the council.

One asked support for a state Senate bill aimed at promoting civic service and preparing students “morally and intellectually” for the duties of citizenship, and noted that Massachusetts is one of only eight states that does not require civics education. Kelley argued that the state’s schools were among the best in the nation even without a civics requirement, and questioned why the writers of the order – McGovern, vice mayor Jan Devereux and councillors Sumbul Siddiqui and Alanna Mallon – were giving opinions on a schools issue.

“I’m ambivalent,” Kelley said. “I’m a little perplexed as to why we as a council think it’s a good idea to weigh in on curriculum, but we have difficulty asking the School Department or School Committee to do anything directly. If we can do this, I don’t know why we can’t be more direct in in our interactions.”

In the order looking for parking options for city and school employees who do not get jobs that come with parking, Devereux – who submitted it with Kelley and councillor Quinton Zondervan – asked the council’s Transportation & Public Utilities Committee to help the “many teachers [who] can’t afford to live in Cambridge,” some of whom have to go from school to school every day because they work on different campuses.

Councillor Tim Toomey proposed shuttles operated by the city. In correcting the perception that lack of parking was a macro problem affecting every school, Mallon revealed that she took part in a micro solution for a school that did have a parking problem: She allows a King Open School teacher to use her nearby driveway.

But as other councillors raised the issue of helping city staff and small-business owners with the same lack of parking, McGovern shut down discussion by reluctantly playing “Debbie Downer.”

“This is a City Council that is moving forward to reduce parking because of bike infrastructure, and here we are wanting to give parking permits to anybody who works in, comes into, visits the city,” he said. “Can’t do it.”

Devereux wound up using her “charter right” to bump conversation to the next council meeting, while the civics course order was approved by the council.

Teacher parking is also a conversation that has come before the council before, and Simmons had a suggestion on a way to move it forward: “I don’t know if there’s an equivalent committee on the School Committee side, but maybe the two can come together to have a discussion.”

Joint committee members weren’t set until after the meeting, McGovern said, so comments by Kelley and Simmons weren’t made with membership in mind.

Here’s the mayor’s statement on forming a joint committee, edited and condensed for publication:

Recently, I had the opportunity to visit a number of Cambridge Public School kindergarten classrooms. These were inspiring visits, in which students asked questions about our city and shared their visions for possible construction projects and improvements – focusing on many of the same issues that face us as adult citizens.

In one classroom, a 5-year-old explained passionately the need for a meeting room where people could get together, talk and build “more trust.”

The student captured a truth: The more we enter into conversation with each other, the more we grow to understand and embrace possible community solutions. It is with this same spirit of inquiry and collaboration as mayor that I am initiating the creation of a Joint Committee of the City Council and School Committee to improve communication on important issues that overlap our two elected bodies. This committee will be made up of three city councillors and three School Committee members, as well as school and city staff.

The creation of this joint committee recognizes a strong commitment on all sides to serving the youth of Cambridge. Issues affecting individual students and schools do not happen in isolation. Policy, budget and other decisions made across the city are linked. Considering root causes and city/systemwide solutions is a charge we must take on. Having served multiple terms on the School Committee and council, I recognize the real and potential impacts that decisions made by one body may have on the other.

Under our city’s Plan E Charter form of government, the mayor serves as chairman of the council and of the School Committee. With the dual endorsement of this committee by each body we recognize and commend the existing good will in our community and are moved to action. The joint committee, which will include myself as chairman, councillors Craig Kelly, Sumbul Siddiqui and E. Denise Simmons, and School Committee vice-chairwoman Kathleen Kelly and members Patty Nolan and Laurence Kimbrough, will have its first meeting in April. And while this committee does not hold legislative authority, it will be dedicated to the open communication of shared challenges and goals, with the clear objective of creating strong, substantive recommendations.

As I mentioned in my inaugural comments, if Cambridge is to become the socially and economically just community we want it to be, it will take collaboration and compromise, and I am confident that bringing our elected bodies together this way will unite us in our shared goals for our young people and families.

This post was updated March 21, 2018, with information from Mayor Marc McGovern about meeting dates and membership for the committee, and to correct the spelling of School Committee vice chairwoman Kathleen Kelly’s name.