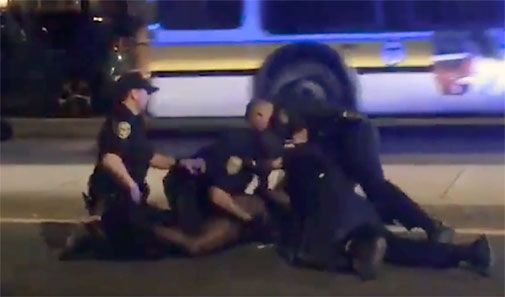 A review of police actions has been promised after a naked Harvard undergraduate reportedly high on hallucinogens was taken down by four officers at 9:09 p.m. Friday on Massachusetts Avenue near Harvard Square, with punches to the student’s torso captured on video.

The Harvard Black Law Students Association is calling it “a brutal instance of police violence” that should not have been needed to arrest the student. Cambridge Police Commissioner Branville G. Bard Jr. said the use of force was “required in order to effectuate the male’s arrest.”

Here are the last 4.5 seconds of the video, zoomed in, brightened up, and slowed down to half-speed. Punching clearly visible and seems quite aggressive even at half-speed. pic.twitter.com/SqiFoarO8C

City officials said they were following the situation closely and awaiting the results of the police investigation. “What is shown on the video is disturbing,” Mayor Marc McGovern said in a statement Sunday. But, as a social worker who has worked for decades in therapeutic schools, “I have personally had to engage in physical restraints. They are chaotic, violent and dangerous, and should only be used as a very last resort. To those witnessing a physical restraint, as well as for all involved, these incidents can be traumatic.”

In the Friday incident, the man was naked, unarmed and standing still when police officers lunged at and tackled him “without provocation,” according to the student group, while officer reports released Saturday said “every attempt” was made to calm the man, but they came to believe he was about to attack.

As one officer described the encounter with Selorm Ohene, 21, on a traffic island at Massachusetts Avenue and Waterhouse Street surrounded by some 30 onlookers:  “We informed him that we were only there to help him and were concerned for his safety …  Ohene’s behavior was aggressive, hostile and intimidating during our interaction. As Ohene and I conversed, I observed him [clench] both his fists. Ohene’s hostility quickly escalated. Ohene started to take steps toward officers in an aggressive manner. I perceived this as a threat and thought an attack was imminent. Ohene’s goal was to seriously hurt himself or one of the officers on scene. Ohene absolutely could not be reasoned with. Ohene’s behavior could only be summed up as chaotic and tumultuous.”

Bard said the officers’ actions were to allow handcuffs to be slipped on and stop the situation from going on long enough to cause further injuries, “particularly since the location of the engagement was next to a busy street with oncoming traffic.”

Ohene’s friends said he was on LSD or a drug called morning glory, an officer reported, which “made better sense of Ohene’s mental state” – in which he had taken off his clothes and thrown them in a woman’s face, according to one of seven calls received by police about the situation. 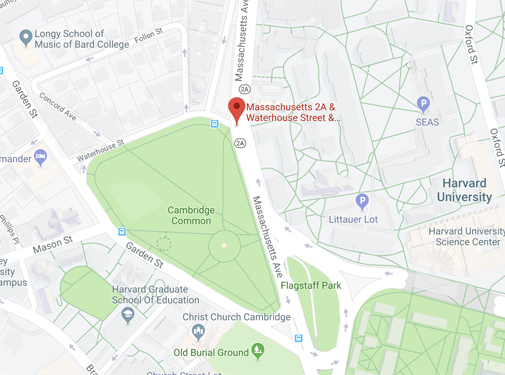 The student group said Harvard University Health Services had been contacted first, but “instead of sending staff to support the student, HUHS transferred callers to CPD, who then responded as police often do whether cameras are rolling or not – by failing to appropriately respond to the individual needs of the person concerned and resorting to violence unnecessarily and with impunity. By involving CPD, HUHS put this student at great risk of being killed by the police.”

The group asked the university to create an internal crisis response team to support students, faculty and staff that would not involve police in such situations, and to support its demands for an investigation into the incident – including officers blocking bystanders’ efforts to record their struggle with Ohene. One video of the incident was deleted by a Twitter user at the request of the student group; journalist John Hawkinson released a few seconds’ worth – slowed down and otherwise enhanced to show the five punches by police – before the deletion.

Conversation about the incident should focus not on the student, but “on the broader issues of police violence against black and brown people and the … demands, and not this particularized incident, which is a symptom of a larger, systemic problem,” the student group said in a statement, asking also that the student’s name not be repeated.

McGovern’s statement didn’t shy away from that aspect of the incident. “Cambridge affirms that Black Lives Matter, but it must be true in practice as well,” the mayor said. “Policing in Cambridge is far ahead of many communities across the country, and yet we can always strive to do better. As mayor, I will continue working with my colleagues to make sure that the horrific treatment of black Americans at the hands of law enforcement has no place in Cambridge.”

An internal review of the incident is required by department policy because of the use of force, police said. (One of the four officers involved was a member of the Transit Police Department.)

Ohene, 21, is being charged with indecent exposure, disorderly conduct, assault, resisting arrest, and assault and battery on an ambulance personnel, because as he was being taken to a hospital for evaluation, he spat a mixture of saliva and blood at an emergency medical technician, police said. Two officers were also treated at a local hospital for minor injuries and “unprotected exposure to bodily fluids.”

Meanwhile, the student group said that “a pool of blood remained on the pavement as the ambulance departed,” and was cleaned with bleach and water by firefighters.

Lessons to be learned

City Manager Louis A. DePasquale released a statement Saturday along with comments by Bard and his department.

“I strongly believe that policing in Cambridge is not about arrests, but about helping people and working to get them the assistance they need. However, there are times when an arrest is necessary,” DePasquale said. “I await the outcome of the internal review and analysis of this incident by the [police] Professional Standards Unit. I have great faith in Commissioner Bard and the men and women of the Cambridge Police Department and I am confident that they will use this as an opportunity to reflect on lessons that can be learned from this incident.”

After the July 2009 arrest of Harvard professor Henry Louis Gates Jr. by Cambridge officers drew international attention to Cambridge policing and race – Gates is black, the arresting officer was white and the charges were quickly dropped – the city spent hundreds of thousands of dollars assembling an expert panel to write a report called “Missed Opportunities, Shared Responsibilities.”

Among the findings of the report is that “When police believe they are not in physical danger, they generally should deescalate tensions … [which] can be a tool for helping to reduce danger by calming a person who is upset or unstable.”

A summary and link to the report is here.

This post was updated April 15, 2018, with comments from Mayor Marc McGovern.