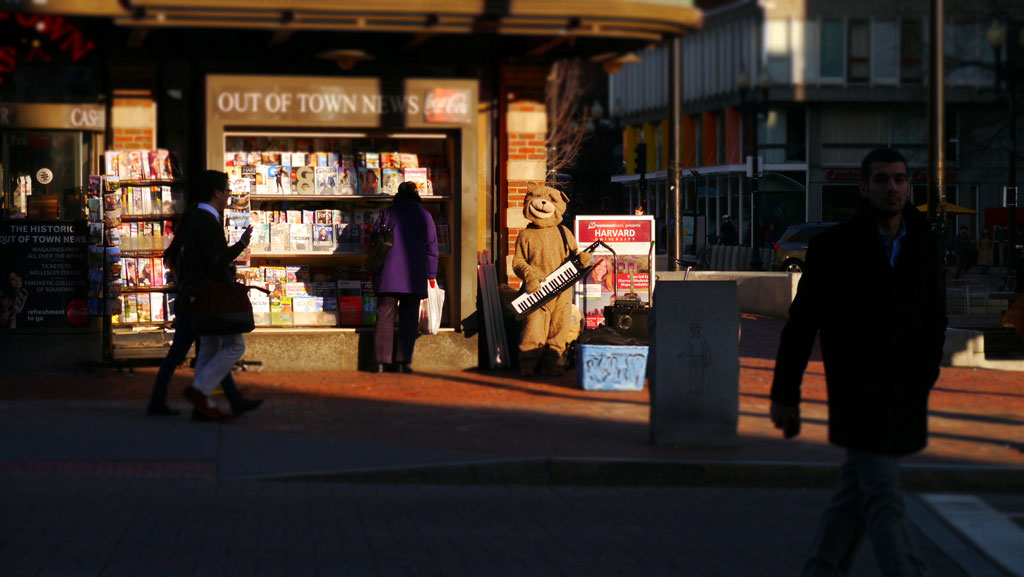 Keytar Bear busks in Harvard Square in 2014. Cambridge buskers must pay a fee that will be examined in a Thursday hearing. (Photo: Sushiesque)

The council gets another chance to ask the state Legislature to allow a redesign of Inman Square, a peculiarly elongated, confusing and dangerous intersection where redesign efforts got a new sense of urgency after the death of a bicyclist there in June 2016. The request by the City Manager’s Office to give the Legislature time to act before a summer break was set aside two weeks ago because citizens filed an appeal of the process; councillors could still act, even though that appeal hasn’t been taken up. Residents who oppose the project – who last week distributed a newspaper-style “Inman Square Dispatch” around town to share their arguments – dislike the breaking up of the Vellucci Plaza park and loss of shade trees and say the plan “takes a straightforward intersection and contorts it into a maze of sidewalks, bike paths and street crossings that are less safe than the present state, inconsistent with current traffic rules and not in the best interests of any of the many stakeholders.” Proponents such as Cambridge Bicycle Safety worry that councillors won’t vote the changes through. If that happens, “The city manager has stated that no other design will proceed at this time,” said the group’s Nate Fillmore, “and we will be left with the status quo unsafe design for the foreseeable future.”

This week’s council meeting also sees the return of an order exploring whether Cambridge’s sturdy but aging cement-lined, iron water pipes will be replaced over time with a pipes using a plastic lining. It’s cheaper and faster to install, but Water Board members have concerns, and an order by vice mayor Jan Devereux with Mayor Marc McGovern and councillors Quinton Zondervan and Sumbul Siddiqui agree on “delaying potential use … until all relevant scientific information is known.”

Another order on taxation of small businesses returns after a conversation between McGovern and the city assessor and a rewrite that would give small businesses’ landlords the break, fixing a situation in which those who “might wish to offer and maintain below-market rate rents for their commercial properties are still taxed on the property’s assessed value, removing any financial incentive for trying to keep rents low for certain tenants,” McGovern notes. The mayor and co-sponsors Devereux and councillors Tim Toomey and Alanna Mallon want permission from the state Legislature to decrease tax rates for those landlords, and a report back before next year’s tax rate is set.

The Transportation and Public Utilities Committee from noon to 4 p.m. Tuesday

A council committee led by Devereux will look at car-sharing services such as Turo and Getaround, with a presentation by councillor Craig Kelley and discussion of parking rules and other issues from the City Manager’s Office; Community Development Department; Traffic, Parking, & Transportation Department; and the Department of Public Works.

Five one-bedroom apartments are proposed for an existing basement space at 3-5 Linnaean St., just off Massachusetts Ave. in Neighborhood Nine near Porter Square, talking the building to 42 total units; also proposed is the conversion of the former Casa Do Benfica fraternal clubhouse to six units at 178 Elm St., off Hampshire Street in the Wellington-Harrington neighborhood a few blocks from Inman Square. The 7,350-square-foot building was built in 1890 and has been used as a clubhouse for soccer fans and other aspects of Portuguese community since 1995. In both cases, the Planning Board must decide whether to free the developers from parking restrictions and some other zoning requirements.

A public hearing led by councillor Kelley will discuss the role and duties of the police officer assigned to City Hall.

Revival and Mothership in Alewife, an UpperWest patio and a faked license

A cafe called Revival and full-service restaurant described as a craft beer hall and called Mothership moves on in the renewal process for the office building at 125 CambridgePark Drive, Alewife. The eateries, to be open to office workers and residents, are the concept of Steve “Nookie” Postal, who opened Commonwealth in Kendall Square.

UpperWest, the 1 Cedar St., North Cambridge, wine bar and charcuterie, returns for a hearing on adding a 900-square-foot outdoor patio. And Royal Punjab, at 251 Cambridge St., East Cambridge, gets a hearing based on charges it was doing business with an invalid and altered license.

Whether Cambridge goes on charging street performers $40 to entertain on city streets – when neither Somerville nor Boston does – gets a new hearing from a committee led by councillors Kelley and Dennis Carlone after a September 2015 request for relief was rejected.

The Historical Commission meets on the second floor of the Michael J. Lombardi Building, 831 Massachusetts Ave., Mid-Cambridge near Central Square.