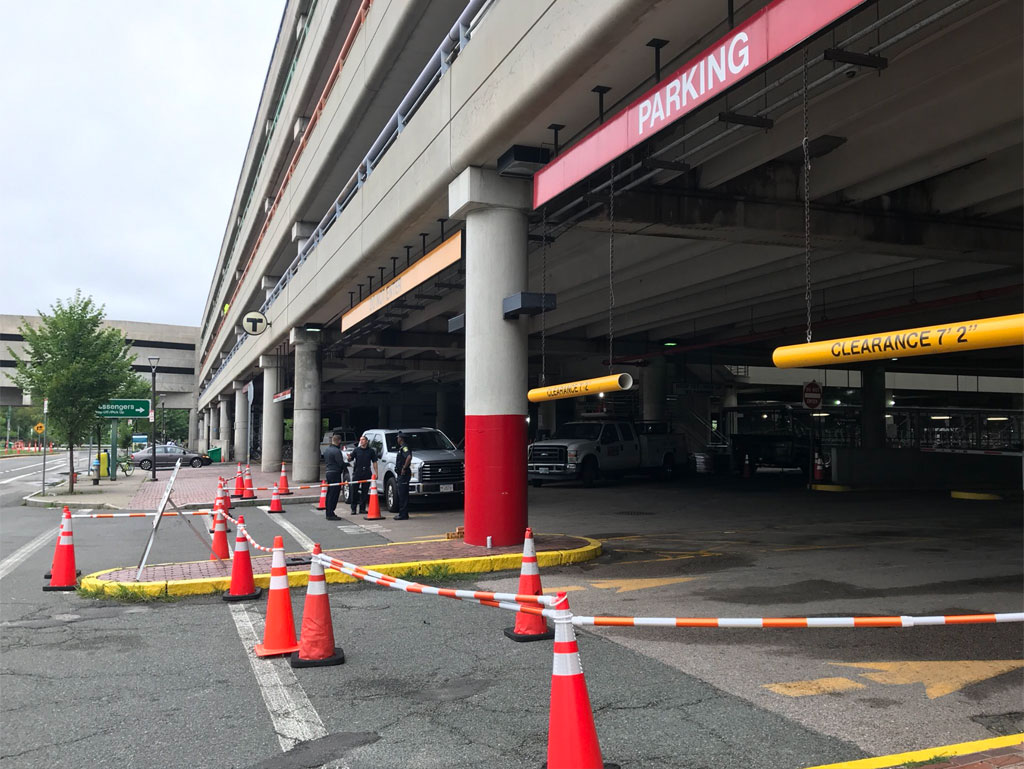 The Alewife MBTA red line T station garage was cordoned off for repairs over the past weekend in this image from city councillor Jan Devereux. Click on the image to see the original. (Photo: Jan Devereux via Twitter)

The Alewife MBTA red line T station garage will reopen for much of the coming weekdays after closing Wednesday over concerns about crumbling concrete, the state Department of Transportation said Sunday via Twitter.

After opening at 5 a.m. Monday, the garage will be available until 1 a.m. and follow those hours “until further notice” while nightly inspections and work goes on to fix any emerging problems and keep spaces “available for the morning commute,” officials said. The garage will close again Saturday and Sunday for a second comprehensive assessment of the garage.

The 2,500-parking space garage saw 500 spaces cordoned off after a chunk of ceiling concrete fell through the window of a car Wednesday. No one was hurt.

While emergency repairs began, the state drew criticism for failing to maintain the structure.

“I’m not a structural engineer, but I’m pretty sure pieces of the building are not supposed to fall off,” city councillor Quinton Zondervan quipped over Facebook on Thursday. “This garage has been a crumbling eyesore for well over a decade, and the MBTA has done essentially nothing about it.”

And state Sen. Pat Jehlen noted that people have reported serious problems in the garage for more than a decade, with the state responding by installing temporary blocks and girders to hold up roof sections for years, as well as blocking off area with clear concrete damage. “We should be fixing these dangerous structures, not just putting on Band-Aids,” Jehlen said. “The [Fiscal Management Control Board] needs to advocate for adequate funding to make a long-term capital plan that doesn’t waste money on emergency Band-Aids, but fixes serious problems proactively.”

A car was damaged by falling concrete in February 2017, Jehlen said, and a November 2017 report said the garage risked “imminent failure” and recommended “immediate corrective action.”

The state is “developing a long-term plan for the garage” with $5.7 million in funding for immediate work, a representative for the MBTA told The Boston Globe. The bids went out in July.

Jehlen said the amount allowed for “clearly not more than patchwork” repairs.

Zondervan suggested tearing it down in favor of building a commuter rail station – a concept envisioned, though without current city or state budgeting, with a bridge over Alewife railroad tracks to the south. The idea continued to draw support in the conversation Zondervan sparked.

City councillor Jan Devereux tweeted at the MBTA on Sunday to ensure the station’s bike cages stayed open during repairs, and transportation officials confirmed they would – but did not address whether more bike storage space would be added, which Devereux also asked.

“We are working to make alternative parking available during these night and weekend closures and will provide details as soon as we can,” officials said. “Crews have worked throughout the weekend to complete inspections and make needed repairs and our safety and engineering teams have determined the garage continues to be safe for customer use.”

Cars left overnight could interfere with repair work and may be towed within the garage or “removed if needed,” they warned.

This post was updated Aug. 15, 2018, with comments and information from state Sen. Pat Jehlen.