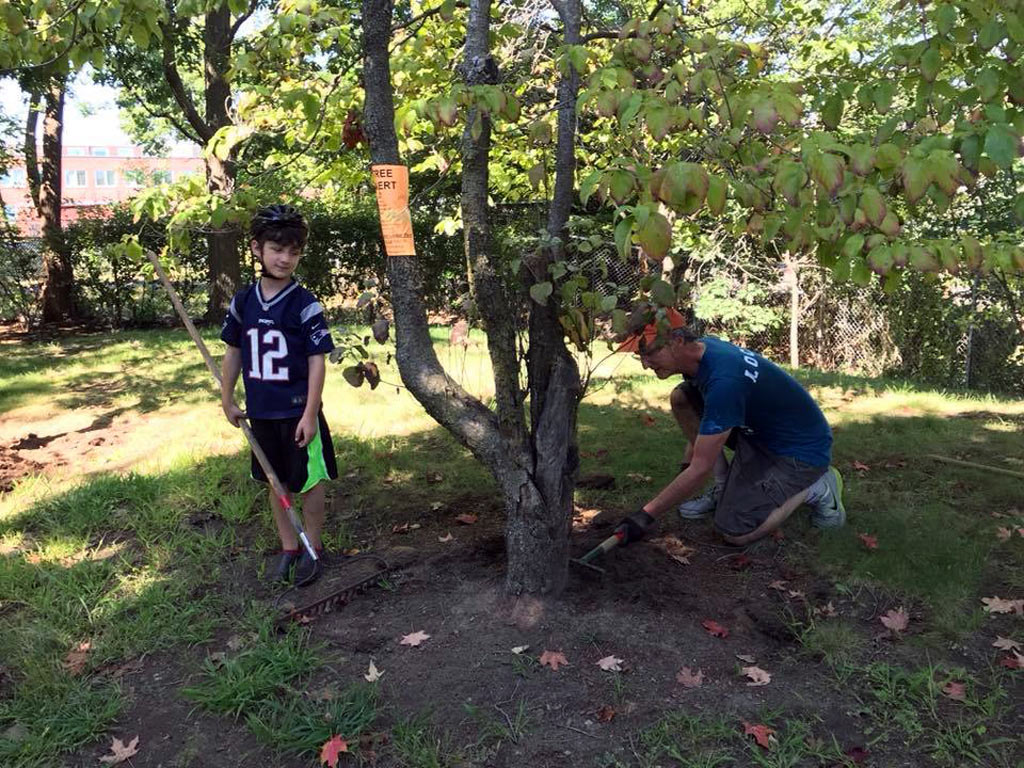 As many as 25 percent of trees along Linear Park are dead or failing, leading to a Sept. 16 recovery effort by a group of citizens. (Photo: City councillor Jan Devereux via Facebook)

How will the city make up for the loss of trees along Linear Park, and why is it suing opioid makers?

City Council, 5:30 p.m. Monday. The city manager has reports on fees for community block parties (the $50 fee is staying) and how Cambridge – joining a broader legal effort – has hired a firm to sue opioid manufactures and distributors, “seeking damages and injunctive relief that will require the defendants to cease their unlawful conduct and abate the public nuisance they have created.” Councillors, meanwhile, are asking the city to undo damage to 55 trees along Linear Park in North Cambridge and prevent further damage, and to block Feeney Brothers Utility Services from working in Cambridge until a federal investigation of the Sept. 13 gas pipeline explosions in Lawrence, Andover, and North Andover is done. There’s also a dozen policy orders from last week to deal with, since councillor Tim Toomey used his “charter right” to delay them when that meeting (including another three of 15 total orders) got to be more than four hours long. “We did our business tonight, we did a good job,” Toomey told journalist John Hawkinson.

Why is the state upset with the Friends of Alewife Reservation?

Conservation Commission, 7 p.m. Monday. Among administrative topics is an insistence from the state Department of Conservation & Recreation that the Friends of Alewife Reservation group cease and desist helping until it submits a schedule of projects “with detailed location and description of activities” for approval by the state. A 25-volunteer culling of the invasive Japanese knotweed(resulting in 40 bags of cut vegetation for the state to haul away) took place in June without state or city commission knowledge or attention to “specific guidelines for removal and disposal,” DCR commissioner Leo Pierre Roy complains.

The commission meets at the Department of Public Works, 147 Hampshire St., Wellington-Harrington.

What changes are coming to Kendall Square?

Planning Board, 6:30 p.m. Tuesday. The board looks at ground-floor design at the Massachusetts Institute of Technology’s 314 Main St., part of its Kendall Square construction, and continues assessing plans to upgrade Henri A. Termeer Square, 364 Third St., Kendall Square, to feature a reflecting pool and more tables and chairs.

How is the city handling changes in stormwater management?

What progress is there on an affordable housing overlay district and inclusionary zoning?

How will the city make up for the loss of trees citywide?

Urban Forest Master Plan Task Force,  6 to 8 p.m. Thursday. Data will be seen and discussion held on possible ways to make up for citywide loss of trees and other greenery. This group is just getting started on a strategic plan to evaluate, maintain and expand the city’s greenery, enabling Cambridge to be more resilient to climate change by reducing the urban heat island effect and mitigating stormwater and nutrient runoff, as well as contributing to “community well-being.”

The task force meets in the Media Cafeteria of Cambridge Rindge and Latin School, 459 Broadway, Mid-Cambridge.

What immigrants will get help from a legal defense fund, and how many more will need it?

Commission on Immigrant Rights and Citizenship, 6 to 8 p.m. Thursday. The first round of grants from a legal defense fund for immigrants is being made, and there will be discussion of proposed federal rules meant to keep people out of the country who might become “public charges” – which the Trump administration hopes will include certain people who have simply used the earned-income tax credit or even services such as legal health insurance subsidies.

The commission meets in the second-floor conference room of 51 Inman St., Mid-Cambridge.

Will Inman Square get new apartments over the former Ryles Jazz Club?

Board of Zoning Appeal, 7 to 11:30 p.m. Thursday. Among other cases, the board will look at a proposal to put in eight apartments (one of them affordable) in the two floors over what used to be Ryles Jazz Club in Inman Square. Developers want a special permit to have no parking spaces, rather than the eight demanded by zoning.