News or views? Newsletter on loss of trees sparks confusion, questions – and answers 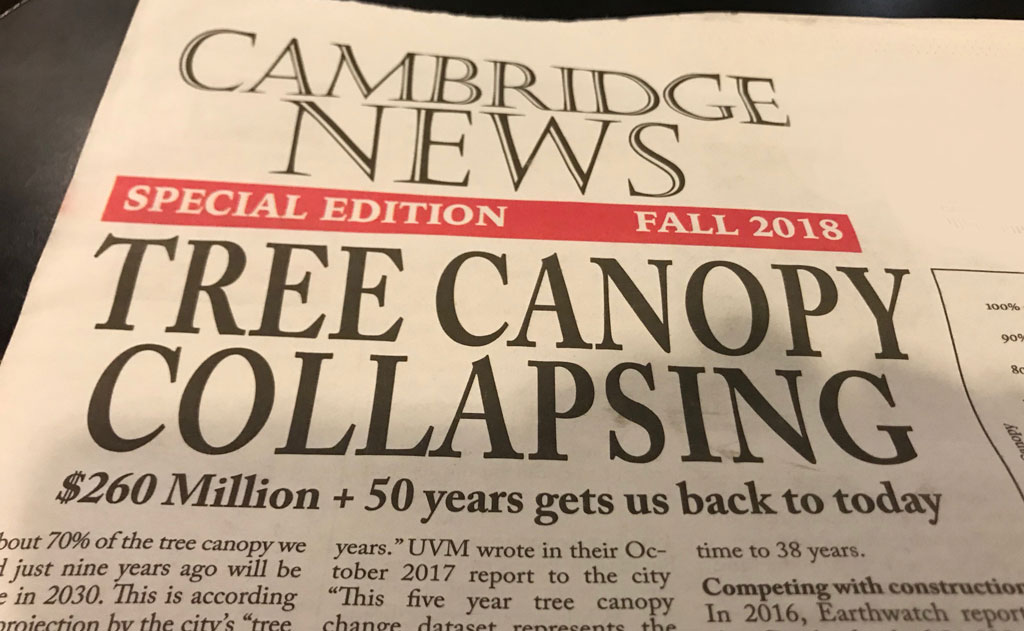 News or views? Newsletter on loss of trees sparks confusion, questions – and answers

The Cambridge News was delivered by mail to residents shortly after Christmas. (Photo: Marc Levy)

Shortly after Christmas much of Cambridge received what looked like a newspaper in the mailbox: the “Cambridge News.” Its eight pages held plenty about trees – including a cover article headlined “Tree Canopy Collapsing” advocating for maintaining and expanding green space – with some familiar and friendly bylines, including city councillor Quinton Zondervan.

Still, the who, what and why remained a mystery to many who missed a box on Page 6 describing the Cambridge News as a project of the Association of Cambridge Neighborhoods, a citywide citizens’ nonprofit launched in 1994.

“I would just like to know the individuals behind an expressed view, not it parading as ‘news,’” said Ruth Ryals, of the Porter Square Neighborhood Association, a self-described supporter of the environmental message of the publication. Mayor Marc McGovern was more pointed in his reaction: “Talking about our tree canopy and other environmental matters is extremely important. What concerns me about this mailing is that it’s not upfront as to who is producing it.” A commenter in the Cambridge Trees! group on Facebook said “part of the problem is this brand-new newspaper came with no introduction – just a big scary headline. No one bothered to write a simple paragraph that said ‘We’re a group of Cambridge residents worried about tree loss. We think you might be too once you know more.’”

Inspired by another publication

That is exactly what the ACN was trying to say, according to responses provided by the group late Friday.

“This is called ‘Cambridge News’ because this is important news for the people of Cambridge. Our goal was to bring information together from a variety of sources – including the city’s own experts – and present it in a comprehensive format so the reader can understand the magnitude and speed that climate change is happening to them while they are sleeping and assuming the city is taking care of them,” said ACN clerk Charlie Teague, a green activist and North Cambridge resident whose work previously resulted in the formation of an Outdoor Lighting Ordinance Task Force.

Teague said the publication was inspired by The Inman Square Dispatch, another eight-page one-shot publication that came out in June to advocate against a redesign of the square considered by many to be poorly thought out. Neither publication was put out by professional journalists, and Teague made part of the Cambridge News about that too: Half an opinion section was dedicated to a piece by former Boston Phoenix scribe and now Northeastern University professor Dan Kennedy about the downsizing of journalism and a companion piece applauding Cambridge Day for its local news. They were the only items not about trees and climate change.

“The Dispatch model was copied and revised – for example, organizing an opinion section – and we transitioned distribution from volunteers to direct mail,” Teague said.

The Cambridge News included the work of some 40 people, and “there was nothing in it that was not touched by at least six people,” said another ACN officer, Heather Hoffman. “The Inman Square Dispatch proved that residents could work together to publish something pretty decent, but it’s too early to say whether or not we will do this again. There are many more issues that can be presented this way if citizens take the initiative to do so, but it is an immense amount of work for amateurs like us, and we have jobs and lives. It most certainly made us even more aware of how vital real local journalism is.”

Teague said his alarm over tree loss was sparked by seeing dead trees and mismanaged greenery along the Linear Park. He spoke at a public hearing in April about the trees that will be removed as part of the Inman Square redesign and was quoted in the Dispatch saying of the expected loss: “It’s not four trees or six trees, it’s four more trees or six more trees.”

Discussing the Cambridge News publication on Facebook, McGovern said it was “started by a group who were opposed to the Inman Square redesign … it bothers me that they don’t disclose that they have a particular agenda.” There was also suspicion among members of the development advocacy group A Better Cambridge, with Dan Eisner saying on Twitter that “The group that mailed it wants to stop the development of desperately needed housing, and they’re using trees as one of their arguments.”

The Association of Cambridge Neighborhoods was not involved in opposing the Inman Square redesign and does not oppose the development of housing, said Gary Dmytryk, who serves as president of the group. The ACN helped broker an agreement with Oaktree Development and residents to end a 10-year lawsuit and build long-stalled housing around St. James’s Episcopal Church in Porter Square, he noted.

Nearly half the people involved in the Cambridge News “specifically insisted that their names not be used” because of fears of retaliation from municipal government, Teague said, noting Cambridge Day reporting of “dubious city actions” against the owners of the UpperWest wine bar and charcuterie after they crusaded to clean up the License Commission. There was also “a history of ad hominem attacks in Cambridge, especially in the electronic media,” he said.

No reader contacted opposed the agenda of a greener, cleaner Cambridge, and the ACN officials said they didn’t want distraction over the publication itself to distract from the issues of tree loss in the face of climate change.

“Cambridge is worse on trees than in the past. A lot worse. This is ‘old news,’” Teague said, referring to reports that the city had lost perhaps 18 percent of its tree canopy in just a decade. City staff had recently, after some 10 years of pleas, convened a task force to address it. “The task force staff has not presented details of why the tree loss is occurring and apparently has not done the research into quantifying the different sources of tree loss. Instead the task force has moved onto policy discussion but made no projections of how any specific policy change” would help.

“One point of the Cambridge News was to report the facts, which, in this case, are nearly all supplied by the City of Cambridge,” Teague said. “People also need to step up and financially support true local journalism.”