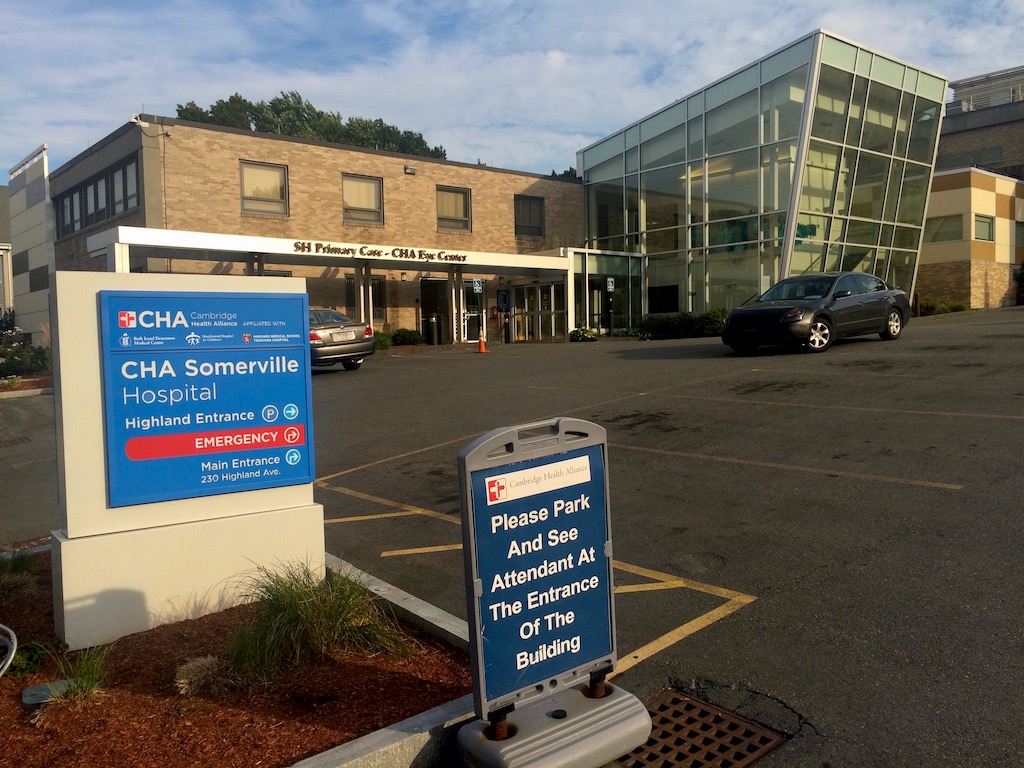 Hospitals are asking Cambridge Health Alliance insight on wayfinding and signage issues since the death of a patient trying to find access to the CHA Somerville Hospital emergency room. (Photo: Marc Levy)

The death of a Somerville woman after she couldn’t find the entrance to the Somerville Hospital emergency room, and the failure of Cambridge Health Alliance staff to tell her husband the full story of what happened, has reverberated outside the Cambridge-based health care system, Alliance chief executive Patrick Wardell said last week.

“This has become a teaching moment for the whole Eastern Massachusetts health care community,” Wardell told members of the CHA committee on population health at a Thursday meeting. He said “several” hospitals have contacted him with questions about the death of Laura Levis and the Health Alliance’s response.

One of those was the Alliance’s clinical partner, Beth Israel Deaconess Medical Center, which is revamping its emergency room and wanted to be sensitive about “wayfinding and signage issues,” Wardell said. In an interview after the meeting, Wardell declined to name other hospitals that sought information because he didn’t “feel comfortable” disclosing potential plans or problems they hadn’t made public. He did say their inquiries were “broader” than the questions from Beth Israel.

The CHA committee on population health examines public health issues, not the kind of patient safety and transparency questions raised by Levis’ death in 2016. Wardell acknowledged this, saying he was speaking to the committee about the incident because “this is a very important moment in time for the organization … We need to demonstrate our support for patients in our community and to our staff.”

Laura Levis, 34, walked from her nearby home to Somerville Hospital early Sept. 16, 2016, seeking treatment for a severe asthma attack. She called 911 after she found a door to the emergency room locked. A dispatcher telephoned the emergency room; a nurse looked outside briefly from the building but didn’t see Levis collapsed on a nearby bench.

Ambulance medics found Levis in cardiac arrest. She died at Cambridge Hospital seven days later. No one from the Alliance told her husband, Peter DeMarco, what had happened; he found out from a police report.

An apology and meetings

DeMarco, a Boston Globe reporter, described the errors that preceded his wife’s death in the Nov. 4 Globe magazine, in a gripping article that brought the Alliance a flood of criticism. After DeMarco appeared on a national television news show, the health care system apologized. Cambridge Day had carried a report about Levis’ death Jan. 2, 2018, but the state health department report on the case – the only information available at that time – did not include names. An Alliance spokesman refused to answer specific questions then, and there was no apology.

Top Alliance officials met with DeMarco on Nov. 13 to answer his questions for the first time. Since then, the Alliance has appointed a special committee of trustees to investigate the incident. The trustees also hired a law firm to look into it, with a report due March 15. The City Council said it will invite Alliance leaders to a meeting of the Human Services & Veterans Committee to explain their actions and report how the health care system is increasing transparency. No meeting has been scheduled.

The special committee has held four meetings; a portion of one was open to the public, with the remainder and all of the next three meetings closed. The committee closed the meetings to discuss items that could give “an unfair bargaining or competitive advantage” to others, or to consider “peer review” matters and “comply with patient confidentiality laws,” announcements of the meetings said. Peer review refers to a procedure for having medical professionals evaluate the performance of their colleagues.