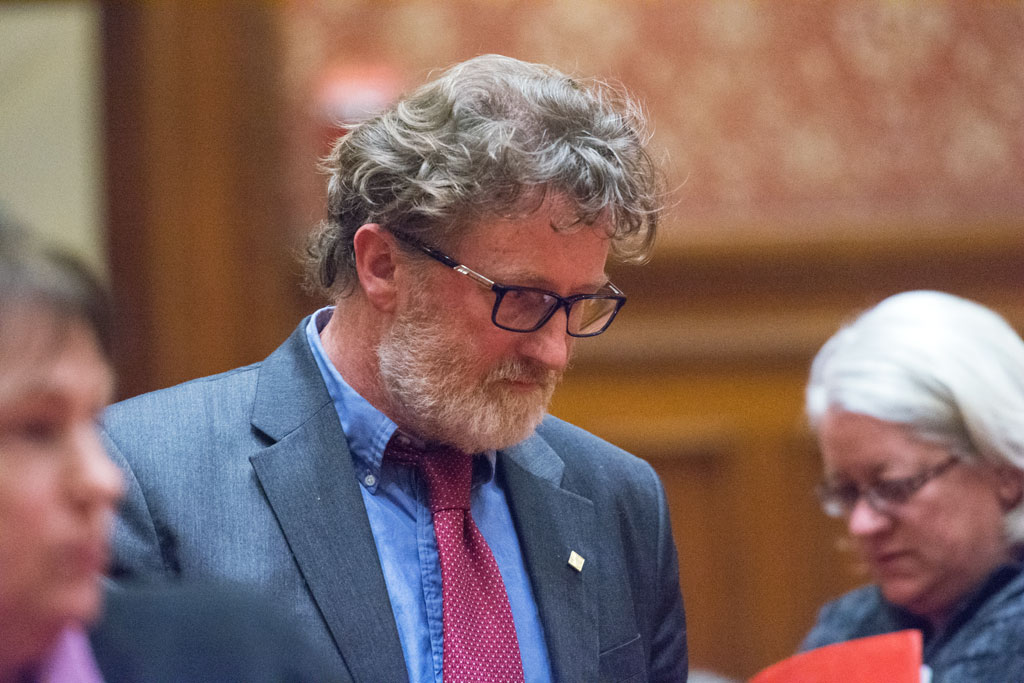 A temporary tree protection ordinance passed the City Council on Monday by a 7-2 vote, freezing city permits for removal of mature trees on private land with replacement fees for healthy “significant” trees taken down without a permit. There are several exceptions, including in case of emergency or when a tree is dead or dangerous.

The ordinance goes into effect March 11 to give the city’s Public Works Department time to prepare paperwork and staff and reach out to arborist and landscaping firms who do the bulk of the removals in Cambridge.

The March 11 effective date was one of two amendments put forward successfully by councillor Craig Kelley (“to ensure that folks don’t take advantage of the spring weather or whatnot to cut down something that they don’t realize is a significant tree and get socked with a surprise tree replacement fee,” as Kelley put it). The second was for an exception for healthy trees that are taken down because they threaten “significant impact to adjacent structures” – a judgment Department of Public Works commissioner Owen O’Riordan said could not be done by city staff, but would have to be handled by independently hired arborists or structural engineers.

Already the tree protection ordinance doesn’t apply to utilities, public land, developments for affordable housing or for projects of more than 25,000 square feet, which are addressed under a separate large project review process. At an Ordinance Committee hearing Feb. 14 councillor Alanna Mallon added language to ensure trees could be taken down if an arborist says it would help nearby trees flourish.

The hiring of private contractors to assess a tree’s impact on a neighboring property suggested there might be little slowing the loss of trees seen as epidemic in recent years, with around 18 percent of canopy gone in the past decade.

“We’re trying to protect the city, and we’re losing trees left and right. In fact, in the last two weeks we’ve lost a good amount of big trees,” councillor Dennis Carlone said. Councillor Quinton Zondervan and vice mayor Jan Devereux reinforced that message, saying they had reports of trees being cut down just hours before the council meeting as well as emails and messages from residents who said they would be hurrying to cut down trees because they worried they wouldn’t be able to when the ordinance went into effect.

But Kelley began the conversation by knocking down a popular term for the ordinance: “It’s not a moratorium in any way that I read that word,” he said, having previously said that the unspecific amounts of daily fines (“not more than $300”) and need to contribute to a tree replacement fund wouldn’t stop developers from taking down trees at projects that will make hundreds of thousands or millions of dollars.

If it’s a moratorium, it’s one so rich in exemptions that Mallon and O’Riordan warned it would burden Public Works to the point of needing additional staff.

“We will make every effort to enforce it,” O’Riordan said, but “resources we have at the moment will be challenged as a result of this. I can’t say how many permits we’ll receive and how many times we’re going to have to speak to residents around this issue and explain this, but I don’t see it as being a small undertaking.”

The ordinance was expected not to be an additional regulatory burden because the ordinance affects “significant” trees of 8 inches or more in diameter at chest height, which almost always require serious machinery such as trucks with cherry-picker buckets to take down. Those require  permitting already, usually because the trucks need permission to stop in the street while sawing is done. Mallon believed the ordinance would demand at least one additional full-time Public Works staffer and made a subsequent challenge: “I want to know right now, is the city committing to hiring a person in the Urban Forestry Division to actually do this work? Because if not, I don’t know what we’re doing.”

City Manager Louis A. DePasquale assured Mallon that the budget – which is mid-process now – adjusts to address goals set by the council; when the final vote came, Mallon was among those voting to approve the ordinance.

In opposition were Tim Toomey, who noted that he’d filed a 2017 order that would have required a hearing for the removal of four or more trees on private property, but thought this ordinance was too restrictive and would pit “neighbors against neighbors, looking into other people’s backyards to see what’s going on”; and E. Denise Simmons, who felt the ordinance didn’t provide enough time for notice to tree owners and had been rushed through.

“At any other time, people would storm the Bastille if we tried to do something this quickly,” Simmons said.

Mayor Marc McGovern wound up voting in favor, but it was hard to tell ahead of time which way he would go. He too had concerns about how quickly the ordinance had moved through the council, seemingly urging O’Riordan to ask for more time even after passage of Kelley’s amendment setting the March 11 date – a date McGovern had also voted for. He also complained that the law change had “one Ordinance Committee hearing and it’s here before us,” which echoed his complaint from the Jan. 28 council meeting at which he sent it to the committee for discussion.

“There are many things that we could and should be acting much faster on than we are, and none of them get this much attention and this much work,” McGovern said, arguing that trees were getting too much attention but too little time.

The loss of trees from various causes has actually been a concern for many years; a policy order from city councillors in May 2010 asked for an accounting back to 2005 as to whether too many healthy trees were being taken down; along with Toomey’s order from 2017 that was never acted on was Devereux’s formal call for an urban forestry task force Feb. 13, 2017; the task force met for the first time 16 months after passage of her order, planning to take at least a year of meeting monthly to finish its work. Zondervan got proposals for tree protections adopted June 18, including one about public trees and another being the code examined Monday. It emerged originally from an Ordinance Committee hearing to be discussed by the full council in January, went back to committee and reemerged this week.

“Some zoning has been pushed through in one meeting, which has been amazing to me,” Carlone said. “This [tree issue] is nothing new. The new element is the shock of the loss of the tree canopy.”

Though officially the ordinance lasts one year from Monday, it was referred to as only a stopgap until the Urban Forest Master Plan Task Force comes out with recommendations, expected to be three months away and followed by a potentially swift council examination and vote.

“This is a short-term endeavor,” Carlone said. “I’ll be voting for it 100 percent with the intent of making it even better in four to six months.”