Tree-cutting moratorium felled by complaints of lack of process, shrugs about ‘emergency’ 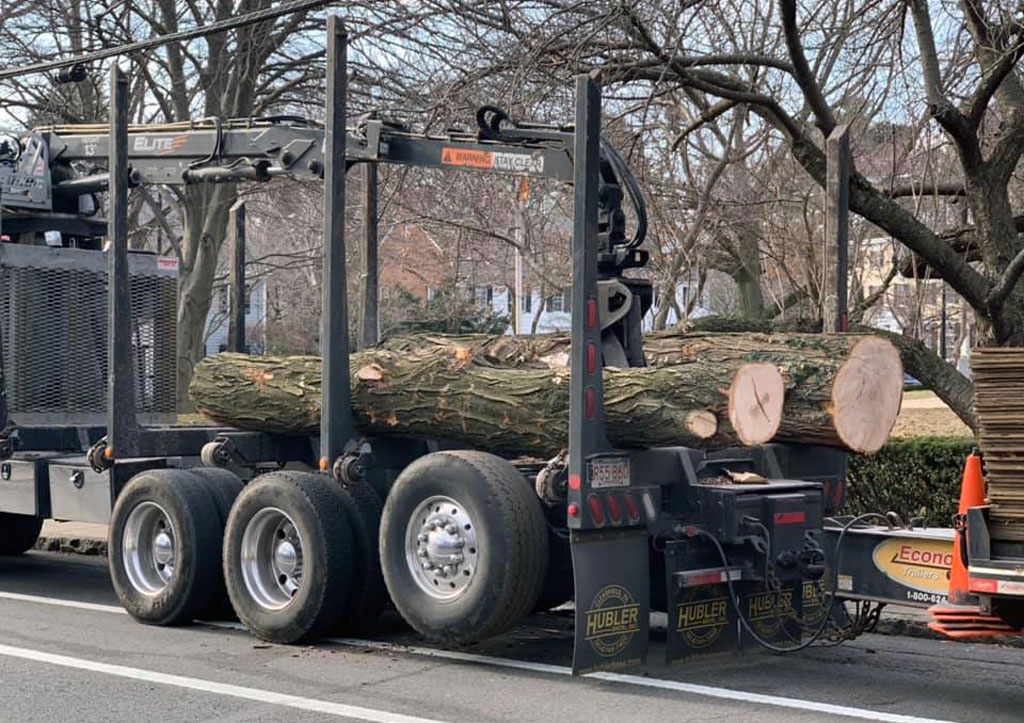 Tree-cutting moratorium felled by complaints of lack of process, shrugs about ‘emergency’

Trees are hauled away Jan. 19 after being cut down on Craigie Street in West Cambridge. (Photo: City councillor Jan Devereux via the Cambridge Trees! Facebook group)

Warnings of an ongoing environmental emergency failed to win over enough city councillors Monday to enact a temporary moratorium on tree-cutting, and instead the idea was returned to the council’s Ordinance Committee for a hearing to be scheduled by the end of February. That might get it back before the full council for a vote in April.

“If we move this back to the Ordinance Committee, all we’re doing is giving people more time to cut down more trees,” said Quinton Zondervan, the councillor who introduced the idea of a moratorium with tree ordinance changes being discussed by the committee Jan. 9.

A tree-cutting moratorium wasn’t expected to be brought up until a final vote on the ordinance, which would demand a permit for anyone planning to take down what the law deems a “significant” tree.

But what followed the committee hearing was a spate of tree cuttings that environmentalists said were being done to get ahead of any possible moratorium, including on streets in West Cambridge and at the Alewife Brook Reservation – where residents say illegal cutting was done on public land but Owen O’Riordan, commissioner of Public Works, has described allowed work on private land.

Another eight to 12 weeks of cutting could follow this setback, according to a letter circulating among tree activists. 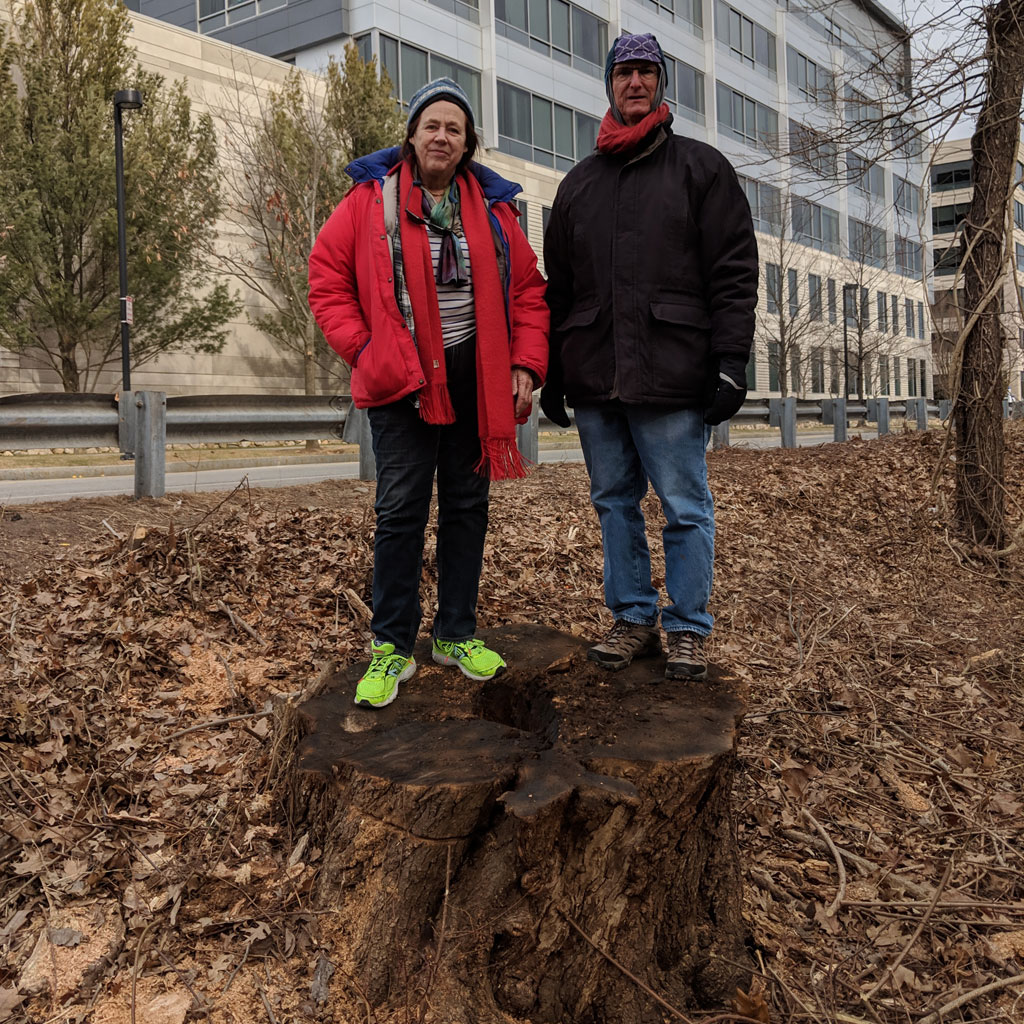 Susan Ringler and Kent Johnson stand Jan. 20 on a stump of a tree cut down a week earlier at the Alewife Brook Reservation. Tree advocates say the wood has been darkened artificially to disguise the fresh cut. (Photo: Charlie Teague) 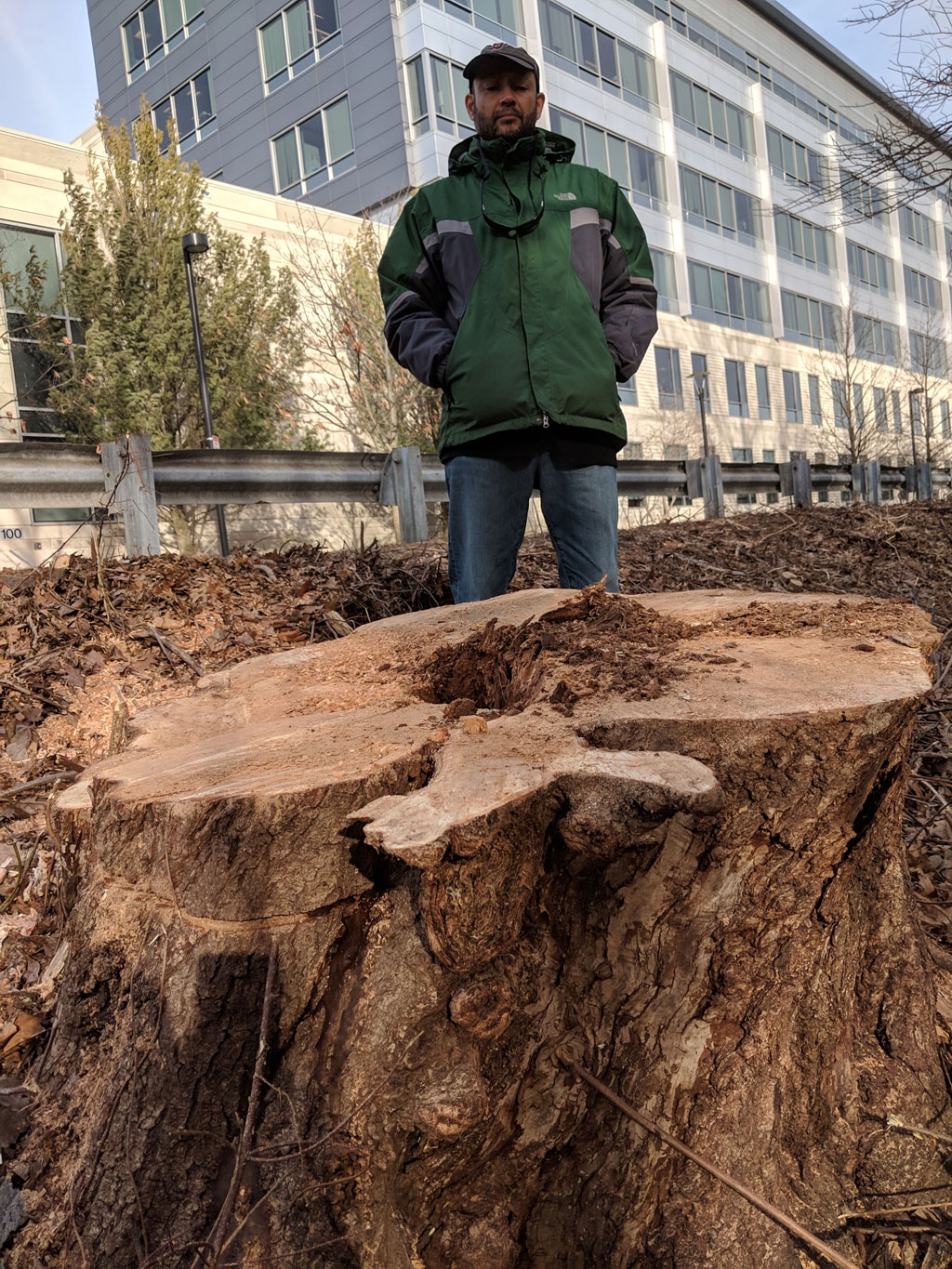 The city has already lost about 18 percent of its tree canopy in the past decade, and the task force has learned that current rates of planting – up to 600 trees annually – suggest a best-case scenario that in a little over a decade Cambridge will have only about half the trees it has now. The greenery is needed to help handle the extreme heat waves and flooding bearing down on the city due to climate change.

The city’s Urban Forest Master Plan Task Force has been “introduced to some really shocking news” by city consultants Reed Hilderbrand, member Maggie Booz said during public comment. “We can’t possibly keep up with maintaining a tree canopy the size it is now. I mean, not even close. We’re at about 25 percent of where we need to be.”

It was a poignant contrast to public comment from Sharon DeVos, whose neighbors on Antrim Street told her of a tree canopy so thick in the 1960s that they could “walk down the street in pouring rain and not get wet,” and Rika Welsh, who remembered that same era on Green Street, “when the entire street was canopied, from Putnam Avenue at least until Hancock.” Now there is only one large tree – in front of her home.

One public commenter described seeing a man arrested Monday for trying to cut down a small public tree. Cambridge police said they had no records of such an incident, or an arrest.

The vote followed some 30 public commenters – nearly all of whom supported a moratorium – and testimony from O’Riordan and city solicitor Nancy Glowa about what enforcement would look like for fines of $300 per day, per violation, until the full cost of a tree replacement is made. (Dead, diseased or dangerous trees, as assessed by an independent arborist, could still be taken down.)

“The Public Works Department, which would be enforcing this through the tree warden, would need to arrange to get ticket books,” Glowa said. “That’s one logistical issue that would need to be addressed.”

Debate raised several points of opposition for the moratorium, including Kelley’s charge that it was more of a “buyout” for developers who would be barely affected by fines and alarm from McGovern and Mallon that unsuspecting homeowners might suddenly face ruinous fines of thousands of dollars just from removing trees in the way of building bathrooms for their grandmothers. Proponents responded that very few people took down large trees by themselves, and that so long as the few contractors who do the work were informed of the law, homeowners wouldn’t be taken by surprise.

For McGovern and Simmons, though, the biggest issue was that the moratorium was before the council without proper notification of people who might want to speak against it. “I just want to bring this back to having some integrity about the process,’” McGovern said. “The policy order before us tonight was not a policy order discussed even in that one Ordinance Committee meeting. So we can’t even go back and say there was one meeting about it … We cannot deny people a chance to have input.”

Simmons wanted to be sure “as broad a population of people as possible that this change is going to impact” were alerted. Though bringing stakeholders to the table is a theme she’s sounded countless times as a councillor and mayor, she added this time the possibility of somehow emailing people directly to match “those folks who support this change [who] are going to bring out their constituency” despite the Ordinance Committee and council meeting being advertised in standard, legal fashion as addressing “tree protection.”

Instead of tree lovers and people worried about climate change, Simmons said, she hoped to contact “the normal Jane and Joe who own homes and have trees in their yard … and often don’t know until [a law] has happened.” She wondered, “How do we reach out?”

In further explaining why he wasn’t comfortable acting Monday despite proponents’ claim that the rate of tree-cutting constituted an emergency, McGovern pointed to affordable housing and opioid addiction, saying “we have lots of emergencies.”

Foes were not convinced by Zondervan’s suggestion that the days between Monday and a final moratorium vote would be enough to bring in more robust public debate, or by Carlone’s suggestion of an even more “interim moratorium” just while debate went on.

The third sponsor of the proposed moratorium with Zondervan and Kelley – he voted against his own order – was Devereux.

Particularly struck by Glowa and O’Riordan naming the procurement of ticket books as an enforcement hurdle, Devereux said, “It seems like we’re looking for excuses to delay this.”