‘Captain Marvel’: Back to the start, and 1990s, to introduce a powerful player in story’s end 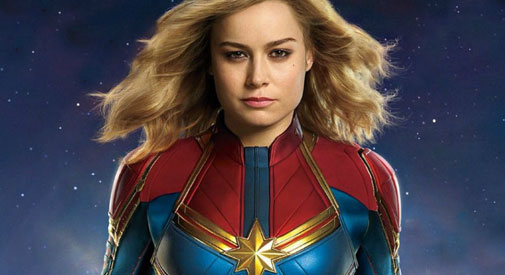 ‘Captain Marvel’: Back to the start, and 1990s, to introduce a powerful player in story’s end

After much online debate and conjecture, “Captain Marvel” finally lands in theaters. After seeing the film, I can say that all the hubbub is totally undeserved, a totally unnecessary distraction – including the attempts by trolls to sabotage box office through “review bombing.” It’s a fine enough superhero flick that in narrative arc is a lot smarter and more sharply developed than most, and on the emotional front it serves up a fitting and warm embrace of Marvel comics mastermind Stan Lee, who died late last year. The opening title sequence is rightfully all about Stan and gets in a brief cameo that may just be his last. (Though with “Avengers: Endgame” on the horizon, who knows?)

The film, the first in the Marvel Cinematic Universe to feature a female superhero, begins humbly, if not awkwardly, on an intergalactic outpost of the Kree (humanoids with blue blood) where the sets and fabric feel “Logan’s Run” levels of cheesy and ersatz. Vers (Brie Larson, and it’s pronounced “verse”) and her mentor, Yon-Rogg (Jude Law), get up in the middle of the night for a round of sparring; it seems Vers has weird dreams that keep her up at night, and she needs to work them out. Vers, we learn, is blessed with photon-charged hands that can blast an opponent across the room; as a result, she’s a big asset as part of an elite force on a mission to battle the evil Skrulls – wrinkly faced green aliens that look like a cross between a Klingon and the foreigners in “Alien Nation” (1988) – that have the ability to disguise themselves as most carbon life forms they encounter.

Blah, blah blah. It’s not until Vers lands on Earth (known as planet C-53, and “a real shithole” to the Kree) that the film starts to build real forward propulsion. It’s a wonderful sight gag when the intergalactic warrior plunges through the ceiling of a Blockbuster video (we’re in L.A., circa 1995) and one of the VHS boxes she peruses happens to be “The Right Stuff.” It’s sly foreshadowing, because in shards we begin to understand that in some form of a former life Vers was an earthling, and something of a Chuck Yeager-fashioned flight maverick. The film jumps to life when agent Nick Fury (Samuel L. Jackson), just launching S.H.I.E.L.D., arrives on scene, incredulous, boisterous and scene-chewing as only Jackson can be, and it’s the biggest and wisest use of Jackson in any of the Marvel films to date. In terms of timeline, it makes “Captain Marvel” something of a prequel to the whole Avengers series.

As far as female empowerment goes (the film’s slated release date is International Women’s Day, FYI), there’s a lot packed in: The soundtrack features women throwback bands Elastica, Garbage, Gwen Stefani and Courtney Love, to name a few; the Kree “Supreme Intelligence” happens to be a very blue-eyed Annette Bening and Vers’ fly-girl cohort (Lashana Lynch) is a single mom with Ripley can-do. Vers, though, is so square-jawed and hypermoral, like Superman or Captain America, there’s almost nothing human to bite into. She’s too strong and too pure, a martini straight up and neat when most of us want it dirty and flawed. That said, she’s not wooden; there’s a feral tomboyishness that appeals, but like Gal Gadot’s Diana in “Wonder Woman” there’s not a lot of depth to plumb beyond a torment of identity and conflicted allegiances that feels pat and by the numbers among an overstock of superhero fare these days. Larson, who deservedly won an Oscar for her harrowing portrayal of a captive woman in “Room” (2015) as well as awards for her remarkable portrayal as a youth home counselor in “Short Term 12” (2013), is remarkably restrained here by suit and role. She carries the film, no question, but it’s the side dishes of Jackson, Bening, Lynch and Ben Mendelsohn as the cagey, complex head Skrull that add spice.

The other main plus to “Captain Marvel” is the husband-and-wife team of Anna Boden and Ryan Fleck (“Half Nelson,” the 2006 film that launched Ryan Gosling’s career), who like Larson, had been primarily indie film stalwarts before hyperjumping to the Marvel Universe as directors and writers (along with a few others). They layer in plot change-ups smartly and backstory with delicacy – nothing feels forced or leaden. The film, unlike many in the genre, actually builds in intrigue as it powers on. It’s not a breakthrough like, say, the way “Black Panther” was, but it is a cut above and, for MCU fans, a nice “roots” story to fill in things for “Avengers: Endgame,” coming at audiences this summer. For that film, Captain Marvel will be among a crowded cast of superheroes trying to take down Thanos. With such a busy, long buildup to take on one being, these incremental chapters introducing us to characters in an ever-widening world almost feels like the road to the 2020 DNC.