Nine months after claims there’s a candle law, fire department tries second time to have one 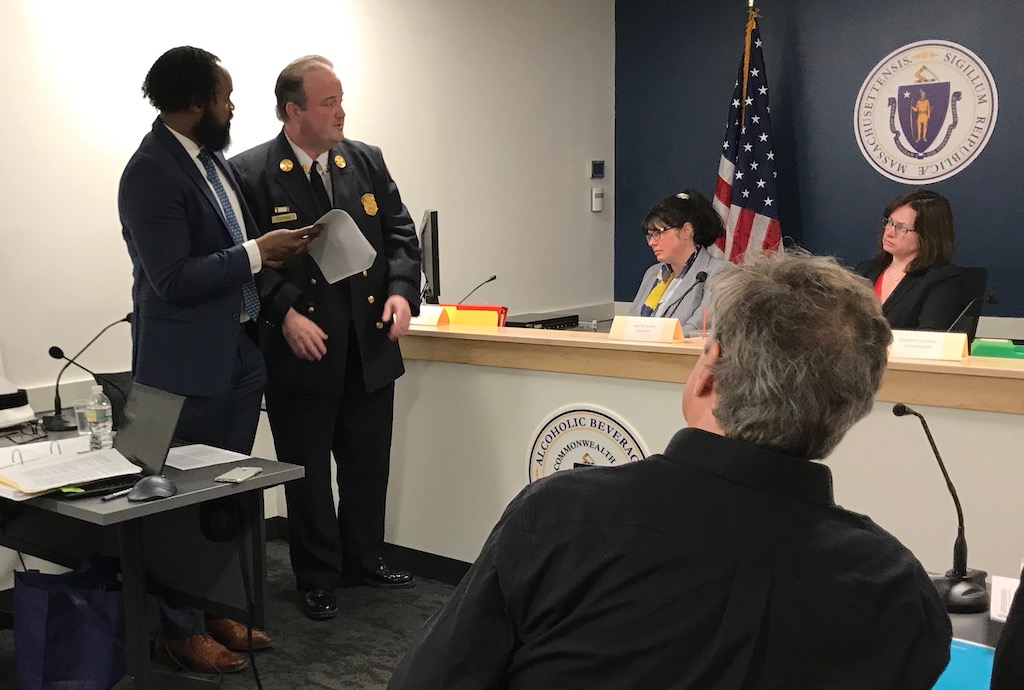 Nine months after claims there’s a candle law, fire department tries second time to have one

Boston and Somerville don't restrict their eateries, can cite no ill effects
By Marc Levy

Cambridge Fire Department deputy chief Peter Donovan testifies before the state Alcoholic Beverages Control Commission on May 6 – the same date given concerning the appearance of a city candle rule at the heart of a case that was already several months old. (Photo: Marc Levy)

Candles in restaurants and bars became illegal in Cambridge last month – the second time since September a surprise “regulation” about candles has been posted – in an unpublicized posting on the fire department’s website.

Under the new posting, there can be no lit candles at any time on the premises of a licensed establishment unless firefighters are paid to be present and keep watch over patrons’ safety. The exception is for birthday candles on a cake, but on no other dessert such a pie or ice cream sundae. The posting says:

The existence of Cambridge’s new language about candles is notable because the department is four days into a state hearing in which it’s arguing that a North Cambridge bar called UpperWest deserves punishment for setting out tea lights for atmosphere – an act that took place some nine months before the language existed. 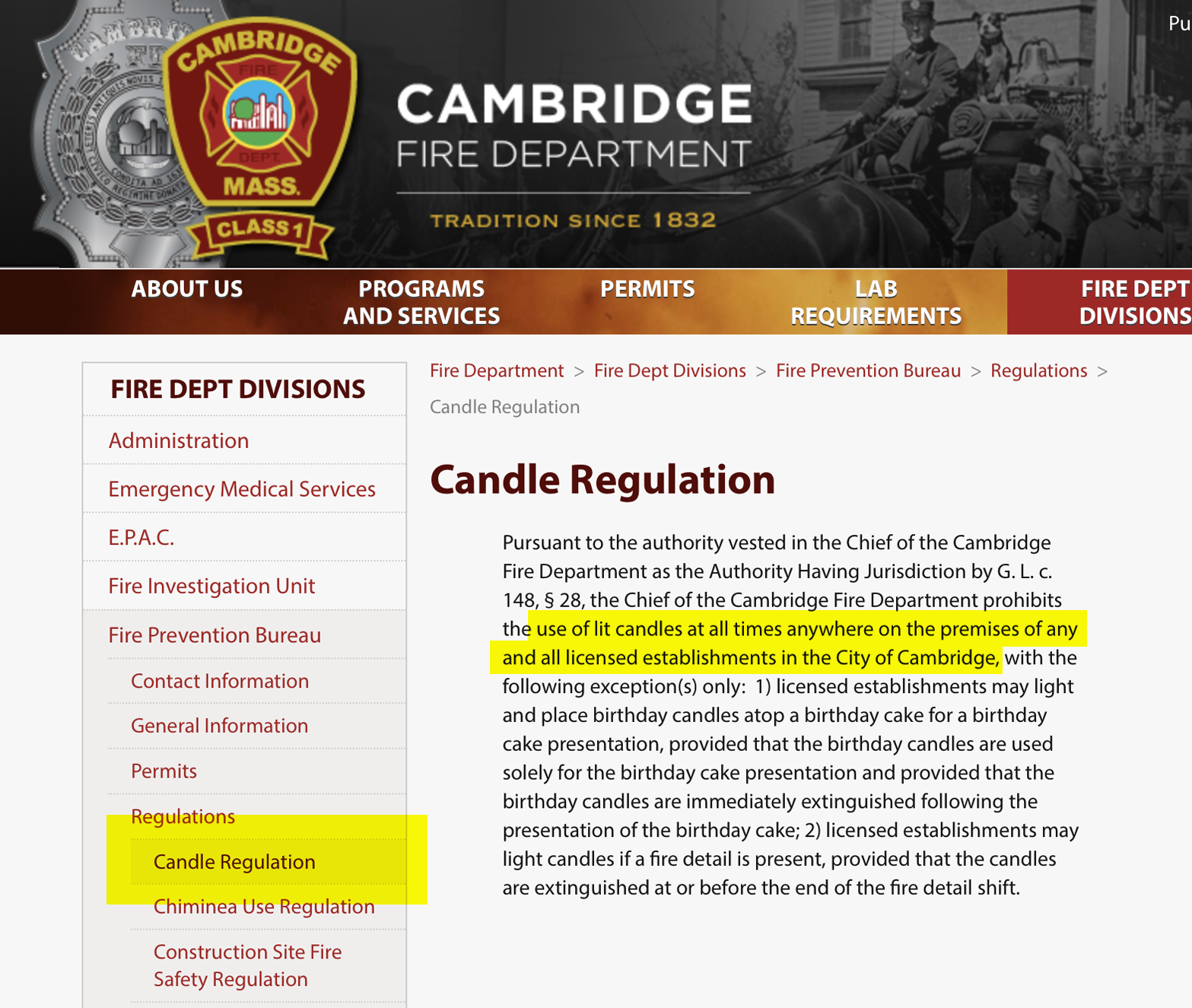 Language about the use of candles in Cambridge restaurants and bars appeared sometime last month.

Cambridge fire officials have given repeated testimony to city and state license commissioners that they have barred candles over the past 28 years because candles always represent an “imminent danger.”

But its prohibition and the new posting are dramatically at odds with how neighbors such as Boston and Somerville handle the use of tea light or votive candles in restaurants and bars.

In part that is because Cambridge fire officials have been unable to explain why candles are an “imminent danger” in restaurants and bars but not in private homes, which is where candle fires take place even in cities that do not regulate tea lights and votive candles in licensed businesses.

In a search of city fire records dating back to 2001, building fires in Cambridge blamed on the use of candles ranged between zero (in 2015) and eight (in 2002). Candles are most commonly the cause of just 1 percent or 2 percent of building fires a year, based on data from the city, where they would be all or almost wholly residential. No candle fires at Cambridge licensed businesses have been cited by fire officials, and even when the department takes to social media to warn about fires resulting from the use of candles in Boston or Jamaica Plain or as far away as Maine and New York, the examples it gives are wholly residential.

Boston and Somerville fire departments report essentially the same results, though, despite having no laws, regulations or prohibitions against the use of tea lights or votive candles in what an online reservation system identifies as being roughly 12,000 restaurant and bars. (Cambridge has around 1,000 listings where the fire department says it prohibits candles.)

Somerville has no candle statute of its own, according to Fire Prevention Bureau Capt. Sean Keane, and restaurants and bars are allowed to use them. A search of a decade’s worth of building fire data by fire Capt. David Stiltner turned up 13 incidents resulted from candles, with every single one laid to their use in private bedrooms, not in licensed businesses. None were serious.

“In my 19 years, we’ve had some small stuff that was caught in time,” Stiltner said, estimating that the city sees between 10 and 20 building fires a year, with an average of 15. (Far below Cambridge’s reported number of building fires annually.)

Boston doesn’t track building fires by year or break out their cause, said Brian Alkins, the public information officer for the Boston Fire Department. While it prefers LED imitation candles and does demand permits for the use of larger candles in restaurants and “function facilities,” tea lights or votives such as UpperWest was using are allowed without a permit. Alkins referred questions to Lori Donovan, senior administrative assistant to Boston’s fire marshal, who said she could cite no candle fires from Boston restaurants or bars in recent memory. She cited a candle fire in a dorm last year, but said it was not serious.

This is not the Cambridge department’s first attempt to write a law retroactively covering the city’s prosecution of the UpperWest bar. Last fall, the department posted short-lived language that represented a perhaps accidental blanket ban on all candle use citywide, saying simply:

“The Cambridge Fire Department does not allow the use of candles unless approved by the Fire Prevention Bureau.”

Officials had to explain that candles were allowed everywhere except licensed businesses, despite the plain language.

Fire officials have refused to say when the previous version of the candle language was posted, and fire and city officials have been vague also about when the current version went up. 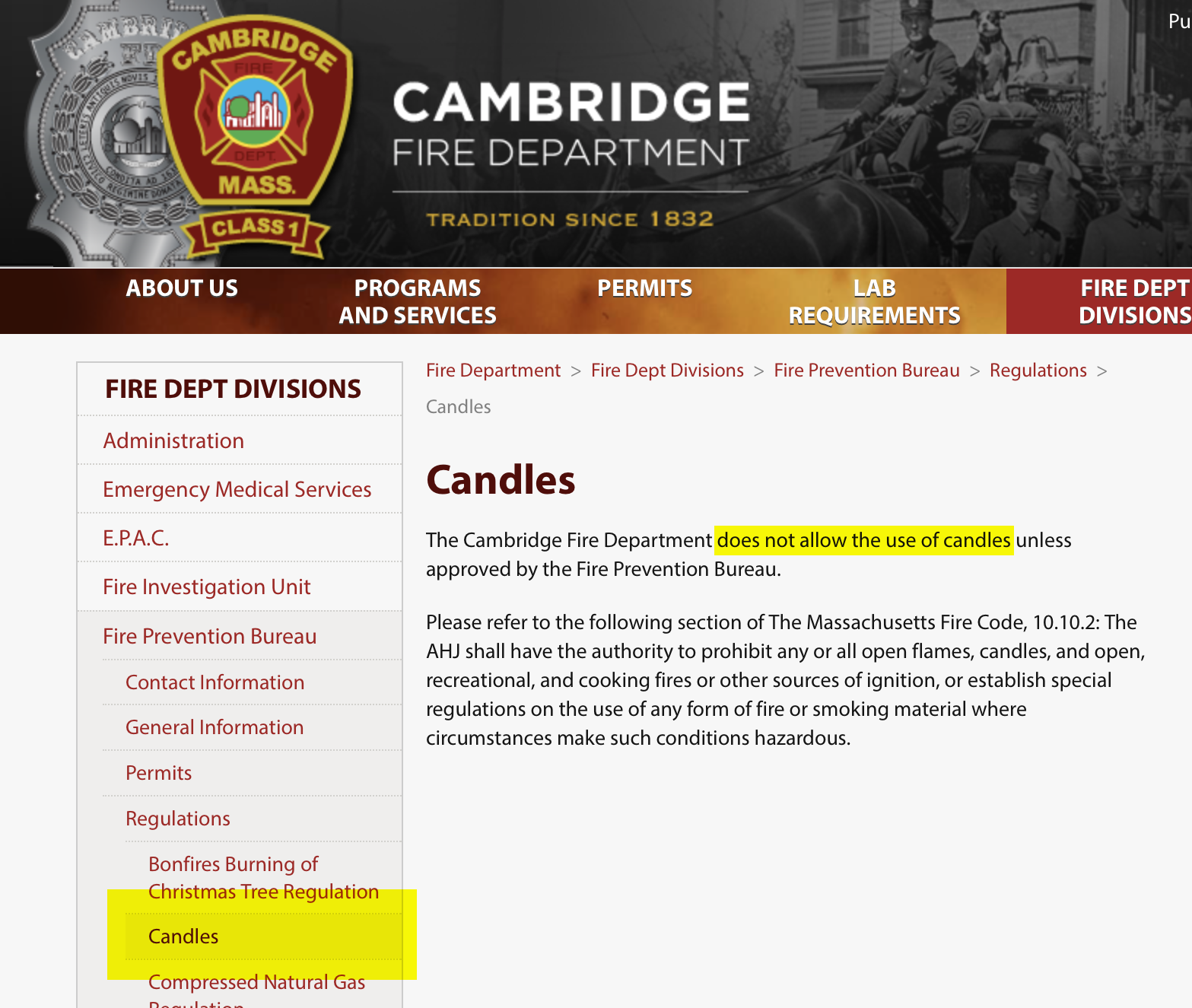 Asked when the new language was posted, Acting Fire Chief Gerard Mahoney said he “directed that [it] be updated on May 6.” Asked for clarification, since his language could mean either that he gave direction that day or that his direction was to be carried out that day, he and Lee Gianetti, director of communications and community relations for the city, declined to answer and stated they would give no more information about the posting or how its presence affected the city’s case against UpperWest. The chairwoman of the city License Commission, Nicole Murati Ferrer, is away for two weeks.

“We do not have any additional information or comment at this time,” Gianetti said in a Monday email.

The sole date they provided is also when fire department officials began testifying before the state Alcoholic Beverages Control Commission – first Lt. Christopher Towski and then deputy chief Peter Donovan; the previous language about candles happened to be up on the city website in time for November’s city commission hearing about UpperWest, and was taken down afterward.

A public records search of the past three years showed no permit had been issued for use in the city anywhere. One request was made by UpperWest to use birthday candles in late April, made just a short time before the appearance of the new city language. (The request was granted, using language similar to what was later posted.)

The language identified as a “regulation” came more than nine months after fire officials first told UpperWest that candles weren’t allowed and, by Mahoney’s vague timeline, about a month after the fire department’s Towski testified to the state that the city doesn’t prohibit candles in writing.

“It doesn’t. It’s not in that wording,” Towski told co-owner Kim Courtney, representing her own business against city lawyers. When a state ABCC commissioner asked how a business such as UpperWest was supposed to know whether candles were allowed, he said it was a “great question.”

Still, although the candle posting is described on the fire department website as a regulation, it is not a law. According to Donovan’s testimony to state commissioners in May, “the Web page is informational. It’s not the code. The code is the Massachusetts Comprehensive Fire Safety Code.” That brings readers in a loop, since state law does not ban candles or demand permits for them – which is how Boston and Somerville can allow them – but does give local fire officials the right to set local fire laws.

The details of the case have been presented in detail before the Cambridge License Commission and ABCC: Fire officials did an inspection at UpperWest on Aug. 3 and told owners Courtney and Xavier Dietrich that they weren’t allowed to use the candles that had been set out; since there was no city language about candles at the time and state law allows candles, local fire officials promised to email the law that proved their case to UpperWest. After presenting to the owners only a law about “portable cooking equipment,” the department went silent despite Courtney’s requests for more information.

Under instructions from city solicitor Nancy Glowa, according to fire officials’ testimony, inspectors made a surprise return to UpperWest on Sept. 29, a busy Saturday night, to either get the candles extinguished or shut the bar down. Courtney and Dietrich again asked to see the law they were breaking, and fire officials again presented only the law about open flames being used for cooking – UpperWest’s tea lights were not being used for cooking – but insisted that they were going to shut down the bar anyway if the owners didn’t comply.

Although Courtney and Dietrich ultimately extinguished their tea lights that night, the License Commission pursued a case against them for using candles in the first place and interfering with fire inspectors’ work. The commission, which includes Mahoney as a member, issued a five-day license suspension, which it has pursued as a five-day closing of the business.

Fire officials’ testimony has made it clear repeatedly that no business before UpperWest had questioned inspectors’ demands to extinguish candles over the past 28 years of enforcement of the unwritten law.

Courtney and Dietrich have pointed out that several restaurants throughout Cambridge go on using candles. Fire officials say their department’s enforcement is complaint based.

The prohibition against candles was inspired by a “deadly fire” almost three decades ago, according to testimony given to state license officials. But candles are not reported as being involved in the June 10, 1990, fire that killed one person and injured 20 in the crowded function room of Cambridge’s former Howard Johnson’s, according to the National Fire Protection Association. The fire resulted from a 20-pound tank of propane that had been “fueling a portable cooking grill, in violation of local city ordinances,” the association said. “A sudden release of propane occurred when a hotel employee was dismantling the grill.”