Preliminary field of candidates drops by two, ends at 22 for council, 11 for school committee 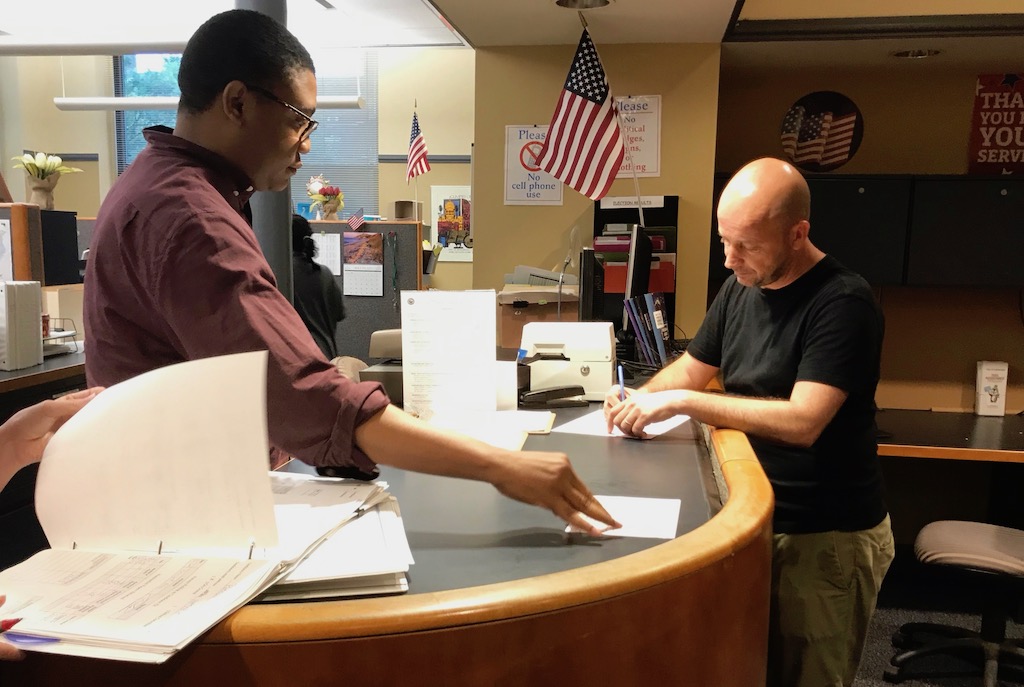 Preliminary field of candidates drops by two, ends at 22 for council, 11 for school committee

Watched by Election Commission staffer Nicholas Leon, candidate Ilan Levy drops off nomination papers July 31, when he said that he was unsure he would stay in the race – but he did. (Photo: Marc Levy)

With deadlines passed to confirm candidate nomination signatures and for candidates to take themselves out of the running, the field for November ends at 22 people vying for City Council seats and 11 for School Committee.

As Election Commission staff neared the Tuesday deadline to confirm signatures on nomination papers, two council candidates dropped off: Deonna Desir, who planned to make support for public housing part of her campaign; and Jamake Pascual-Navarro, who ran for council in 2011.

At least 50 signatures of residents are needed to ensure a nomination. No more than 100 are accepted.

Desir turned in 58 signatures at the very end of the nomination period July 31, explaining that she’d had to pull them together in a short time despite taking them out at the very start of the nomination period, July 1. When mold was discovered in her Corcoran Lane home, her family was uprooted for three weeks she would have spent gathering more signatures in a more leisurely way. Among the signatures she turned in, 13 were disqualified and she wound up five short at 45.

Pascual-Navarro turned in 77 signatures, but so many were disqualified that he was left with only 46, according to the Election Commission. (His name should have been included in a preliminary, unofficial list of candidates published at the end of July, according to the commission, but the log available at the front desk in the commission’s offices showed only 50 names, of which only 25 were verified. Seeing only 25 verified names, Cambridge Day left his name off.)

The most common reasons for disqualification are not being registered to vote, having already signed another candidate’s nomination papers or having an address that doesn’t match up with what’s on file with the commission, staff said.

The deadline for candidates to take their names off the ballot was Friday. No candidate opted out of running. Perhaps the biggest question mark was for Ilan Levy, who filed his signatures July 31 saying he was unsure if his work responsibilities would allow him a full campaign season – but by Friday he was still in the race.

He encouraged changing Cambridge’s form of government during earlier campaigns, with the aim of decreasing the power of an unelected city manager, and he said Friday that his goals were essentially the same for his “third and final campaign.”

He wanted to “refocus the center of decision-making, whatever it takes to get the community more involved,” Levy said.

Election day is Nov. 5. Voters in Cambridge elect councillors and committee members by ranking up to their top 15 candidates; councillors elect a mayor out of their own ranks upon meeting for the first time in January.

The council has nine seats, and eight members are running for reelection – there will be one guaranteed new face because incumbent Jan Devereux opted out of a reelection run in May.

The School Committee has six seats (with the mayor leading as a seventh member) and next year will see three guaranteed new faces: Committee incumbent Patty Nolan said in June that she’d decided to run for council; Laurance Kimbrough said that he’d decided against another arduous campaign; and news that Kathleen Kelly was dropping out after three terms came at the last moment, July 31.

“I seriously considered running for another term,” Kelly said via her social media accounts. “I know some of you will be disappointed with my decision.  I am proud of the work I was able to accomplish during my six years on the School Committee, especially my continuous push for equity, improved special education, student supports and more social workers in our schools for students who struggle with emotional disabilities.”

This pool of candidates is large, but smaller than the past election season with its 26 candidates for council and an even dozen for School Committee. It’s also far from the largest Cambridge has seen. In 1941, there were 83 candidates running for City Council; races with candidates numbering in the 30s were not uncommon in the 1950s and 1970s.