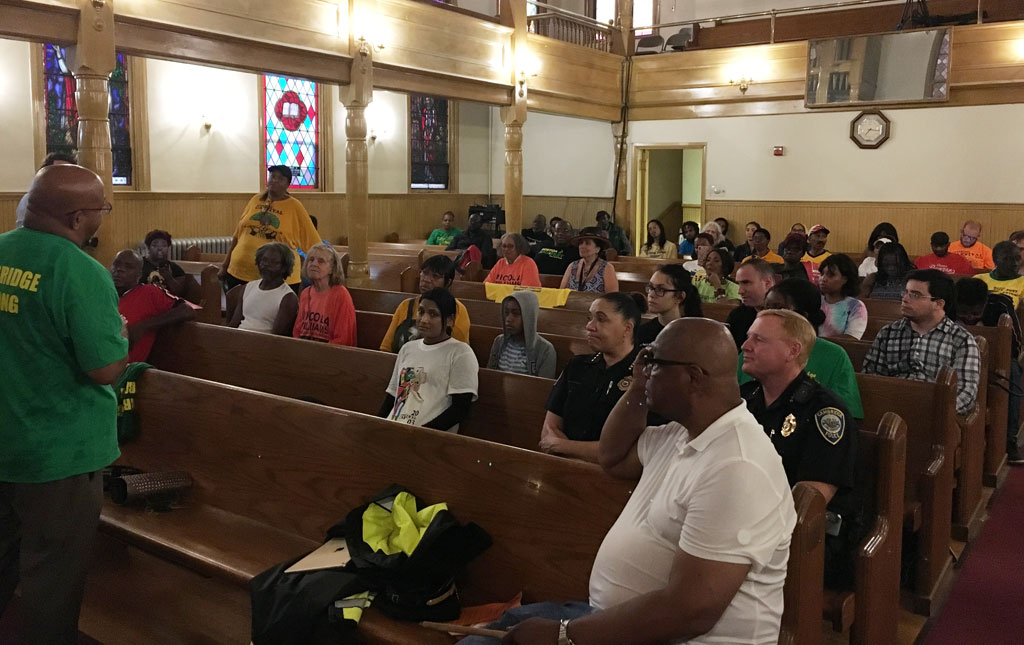 A community forum about the cancellation of the year’s Cambridge Carnival meets Wednesday at Union Baptist Church in Lafayette Square. (Photo: The Office of Quinton Zondervan)

Organizers of the canceled Cambridge Carnival want a scaled-back event on the rain date during the weekend of Sept. 28-29 and a commitment for community involvement that allows the carnival to be held next year and without fail in the future, they said during a Wednesday rally, march and forum in Central Square.

But this year’s carnival, which was planned for Sunday and would have been the 27th annual celebration of Caribbean/African culture, remains canceled due to threats of violence. Shootings before and near the Boston Carnival Parade in Dorchester two weekends ago killed one person and injured three more.

A fallback outdoors event being proposed by carnival organizer Nicola A. Williams and a 12-person volunteer carnival committee is also facing resistance.

“The message has been consistent to us: No,” Williams said. 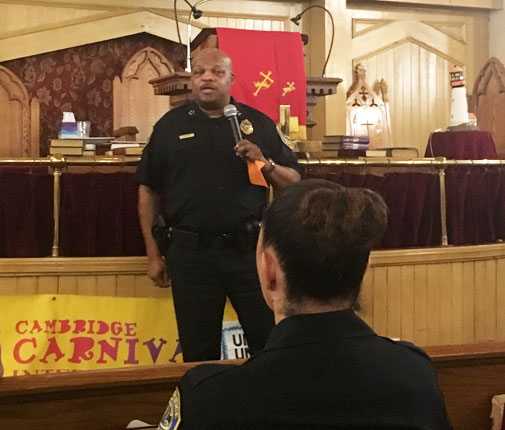 Officials such as City Manager Louis A. DePasquale and police commissioner Branville G. Bard Jr. have expressed support for something held indoors, she said, but such an event would hardly capture the spirit of the giant, vibrant festival of music, dancing and food that draws crowds of more than 100,000 annually to Kendall Square, after a parade from Central Square. “It doesn’t seem like they are interested in, or comfortable with, undertaking” such an event this year.

The city still hasn’t articulated a way forward, she said. As a result, a list of wants provided by Williams includes reimbursement to Cambridge Carnival for funds lost due to the cancellation.

City councillor Quinton Zondervan said his past week has been filled with discussions about the cancellation, with a similarly opaque outcome that leaves him with similar concerns – concerns he heard expressed by many people at the Wednesday forum. 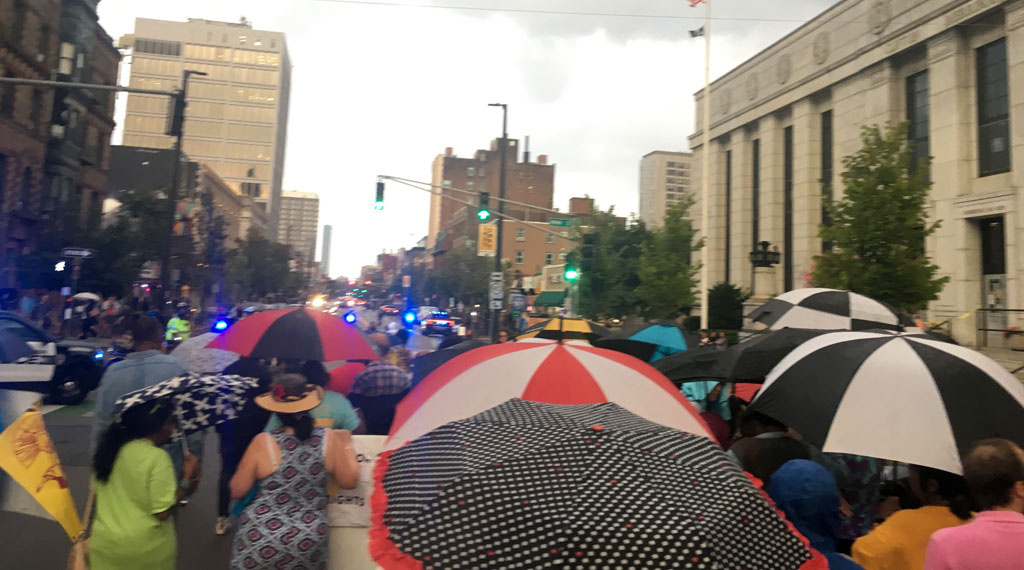 Rain soaks marchers Wednesday as they make their way to the community forum.

“There’s the emotional pain of the cancellation of their favorite event, which is totally understandable, and there’s financial pain,” Zondervan said. “It may not be possible this year to assuage the emotional pain, but my hope is that there’s some way to ameliorate the financial pain with an event that isn’t quite as spectacular, but at least people can recoup” some of their investment. One location suggested for a fallback event is the University Park Commons, in Cambridgeport near Central Square.

Zondervan, a city councillor from Suriname in South America–culturally part of the Caribbean–has a policy order planned for Monday’s meeting of the City Council that asks the city manager to help make up for the year’s cancellation of the planned carnival and to keep it place “next year and forever … and if for whatever reason the event can’t happen, that the community be consulted and included in a timely fashion so plans are in place ahead of time for a backup event.”

The list from Williams urges Cambridge’s police commissioner to collaborate with his counterpart in Boston and seek out “lessons learned and valuable insights” from other street carnivals, including in New York, Toronto, Trinidad and London, and from Boston’s Fourth of July events. “The question is how can we move forward?” Williams said. 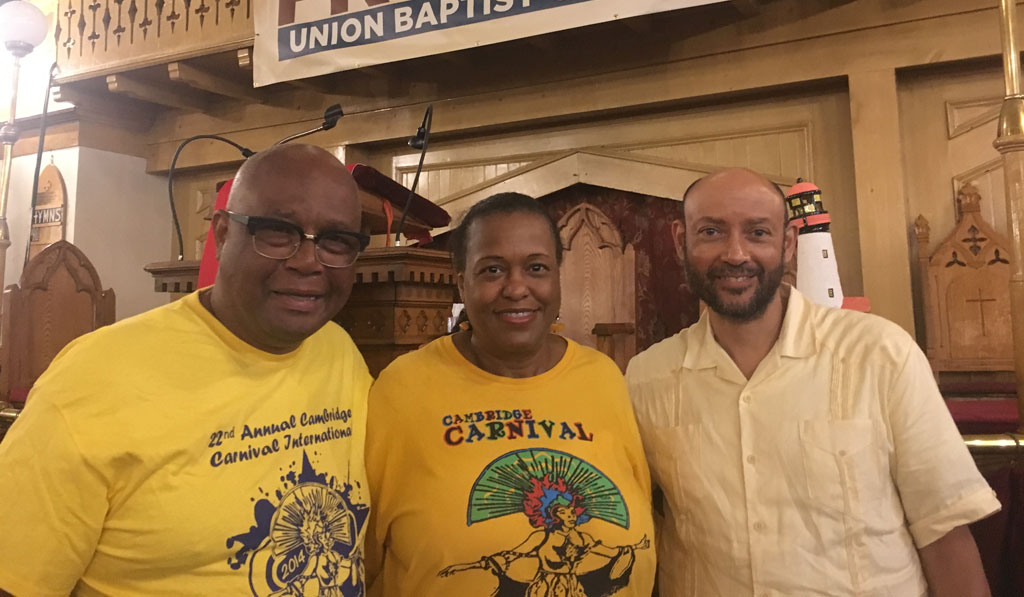 The Wednesday rally at City Hall was threatened by bad weather that turned into a powerful downpour that soaked participants during their march. But the forum at Union Baptist Church in Lafayette Square seemed to grow in numbers to roughly 100 people to hear discussion by Williams, Bard and others, Zondervan said. Former city councillor and mayor Ken Reeves, now a co-leader of the local NAACP, also spoke during the evening’s events to express mystification over the shutdown of the event. In a half-century of carnivals in the United States, this was a first, according to Reeves and Williams.

It happened without input from the community, Zondervan noted.

“What I think really stood out to me was the fact that the community really wasn’t part of this decision. And it’s not the police commissioner’s fault. It’s just another example of the black community in particular not being respected in the right way, because this event shouldn’t be structured in such a way that it’s just suddenly canceled by the police based on some information that they receive without any input from the community, without any recourse by the community to have a different outcome,” Zondervan said.

The next step is up to DePasquale, who will have a short time to respond to the policy order Zondervan said he is filing for Monday. “At the end of the day, he and he alone has to make some decision,” Zondervan said.

This post was updated Sept. 6, 2019, to correct when and where Boston area shootings took place.