‘The Lighthouse’: Surrounded by dark waters, sloshing through a storm of their own making 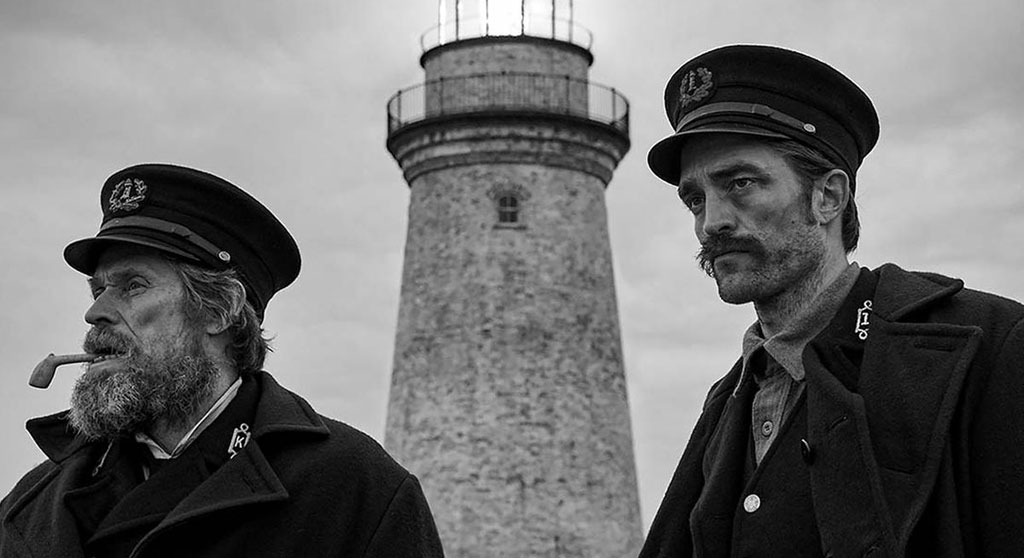 ‘The Lighthouse’: Surrounded by dark waters, sloshing through a storm of their own making

“The Lighthouse” is a senses-riveting immersion, aurally awash in the sonorous sounds of the sea, the pelt of torrential rain and the soul-shaking roar of the title structure’s bullhorn. It’s also brilliantly composed in austere black and white, in a retro-cropped format (practically, a neat square at 1.19:1) by Jarin Blaschke, who also shot director Robert Eggers’ debut, “The Witch” in 2015. “Roma,” another bold black and white gamble, walked off with the Academy’s best achievement in cinematography last year – and rightly so – but I must say, much of what Blaschke and Eggers conjure up here is more vital to their film’s core and registers an overall surpassing grade. Hard to imagine, but yes, it’s that stunning. 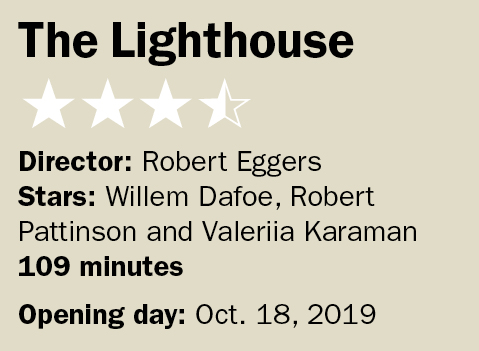 The narrative the ambience hangs from isn’t quite as sure, but what’s to worry when you have Willem DaFoe and Robert Pattinson? The setup, based on writings by Melville and sea-obsessed others of the era, has two men keeping the flame on a remote isle somewhere far off the New England coast. It’s circa 1890, so there are no cell towers; there’s also no Morse code from the island should something go wrong. The pair are dropped off on the rock for a four-week shift. Dafoe’s Thomas is a salty old tar, Pattinson’s wide-eyed Ephraim the newbie in his charge. The order of things gets laid out early on: Thomas does the all the attending to light, which is kept under tight lock and key, as well as the cooking, while Ephraim pretty much does the backbreaking rest – scrubbing the floors, hauling heavy loads of coal across jagged rock outcroppings, emptying the piss pots and painting the structure from a rickety harness that would make any OSHA official cringe.

Thomas proves to be an Ahab-like taskmaster, though just what his white whale is never surfaces. The first rub between the mates comes over the consumption of booze (Ephraim won’t partake) and later the quality of those scrubbed floors. What Eggers begins to simmer here (as he did in “The Witch”) is a slow descent into madness as things fall apart, with faint hints of perhaps something bigger and more divine at play – fog-impaired siren sightings, booze-addled images of sensually writhing tentacles and even the incarnation of Neptune himself. The existential horror story gets triggered by a vociferant gull with all the brio and menace of the devil-eyed goat Black Phillip in “The Witch,” and the arrival of a nor’easter that could hold up their relief by weeks, if not months. The stranding ultimately becomes an opportunity for the actors to really dig in and Act – and boy do they, as alcohol, sexual tension and stormwater rain down upon the splintering shingles of their characters’ relationship with the mystery of the lighthouse tower and Thomas’ journal (also conspicuously under lock and key) ever pulling at Ephraim.

The chemistry between the two, well at the top of their games, couldn’t be any more perfect, and it’s a pretty physically taxing slog, to boot. Pattinson, so good in such offbeat, gritty ditties as “Good Time” (2017) and “High Life” this year, pours himself into the part, never flinching as torrents of wind-driven rain or fecal matter pelt his face. But this is Dafoe’s flick, his mercurial changeups and old sea dog affect behind a beard so thick and mangy it rivals that of Edmond O’Brien’s old coot in “The Wild Bunch” (1969), sells and seals both the authentic air of the period and the reality-warping mayhem.

The film’s finest moment, echoing the “Indianapolis” scene in “Jaws” (1974), has the marooned liquored up and singing and dancing gaily. In the cloistered quarters, the choreography and execution are pure bravura. Of course there’s no shark to break the interlude, just the specter of loneliness, haunted pasts and the unmistakeable boundary of taboo. Other cinematic borrowings from “The Shining” (1981) and “Apocalypse Now” (1979) may raise a brow, but are otherwise unnecessary distractions.

The other bright spot is the titular structure itself. The isle-perched beacon looks a legitimate relic, 150 years old, but truth be told, it was erected to house Eggers’ haunted hall of personal demons. There’s also some eye-grabbing visual effects with the use of white burning light and an eerie score by Mark Korven that deepens the whole, beguiling experience. Like Pattinson’s deep space cruiser en route to a black hole in Claire Denis’ “High Life,” “The Lighthouse” is less about liftoff or landing and more about the tormented sojourn.

“The Lighthouse” screens for free at 8 p.m. at The Brattle Theatre, 40 Brattle St., Harvard Square, with the director on hand, courtesy of the theater and Independent Film Festival Boston. Information is here.