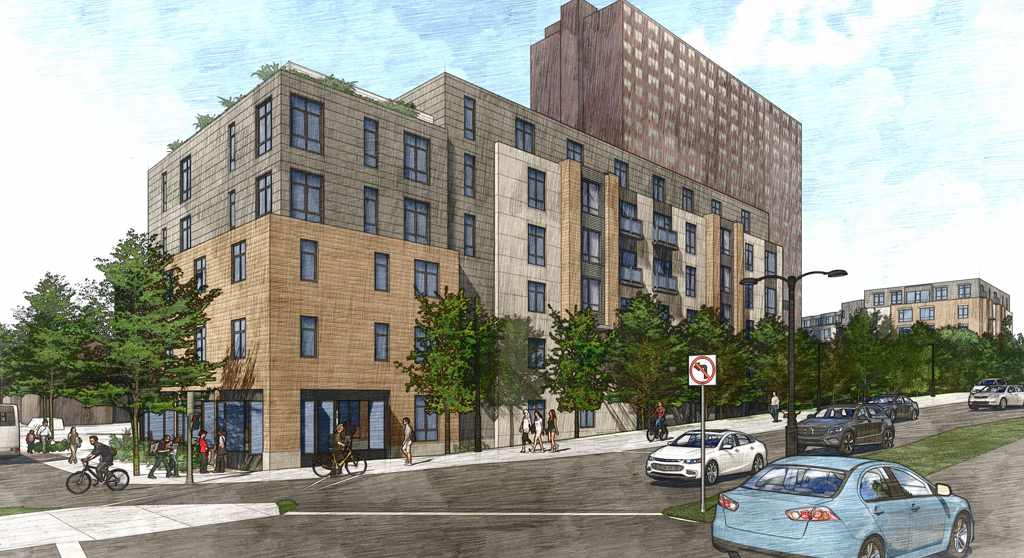 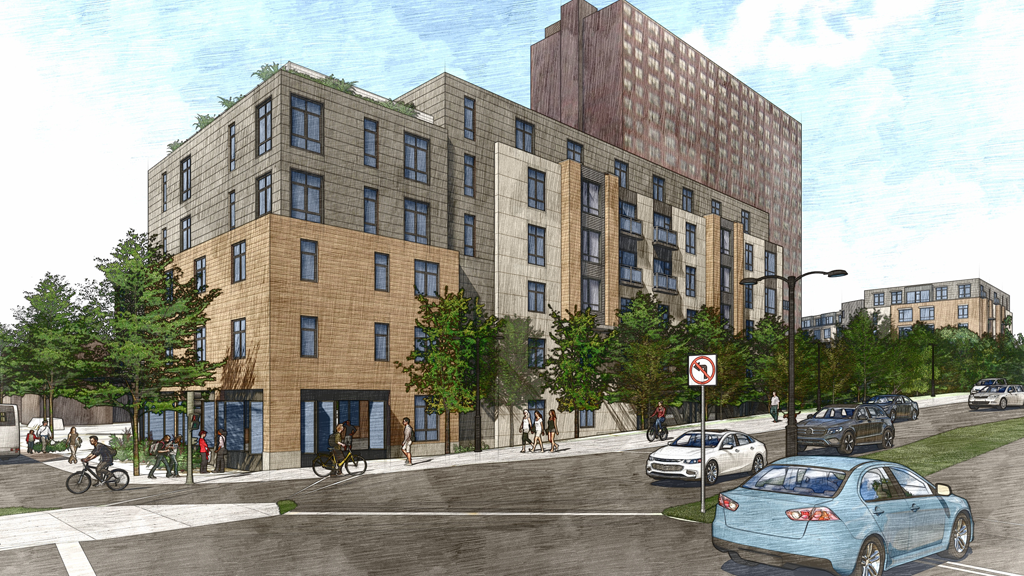 It seems like a winning idea to add 100 units of lower-income family housing and an education and job training center on land already owned by Just-A-Start, a Cambridge nonprofit developer. But plans for the project, called Rindge Commons, are not embraced by all of its future neighbors at the Rindge Tower Apartments in Alewife.

The plan is to put up two smaller buildings by 2025 on ground now taken up by parking spaces, starting with around two years of work begun in April on zoning approval, design and financing. The organization expects to be in front of zoning and planning boards this year, have approvals in place and financing by 2020 and to start building once weather allows, according to an October call with Just-A-Start director of real estate acquisitions Craig Nicholson and executive director Carl Nagy-Koechlin.

During five community meetings and three for Rindge residents, there have been complaints and worries about parking and density. 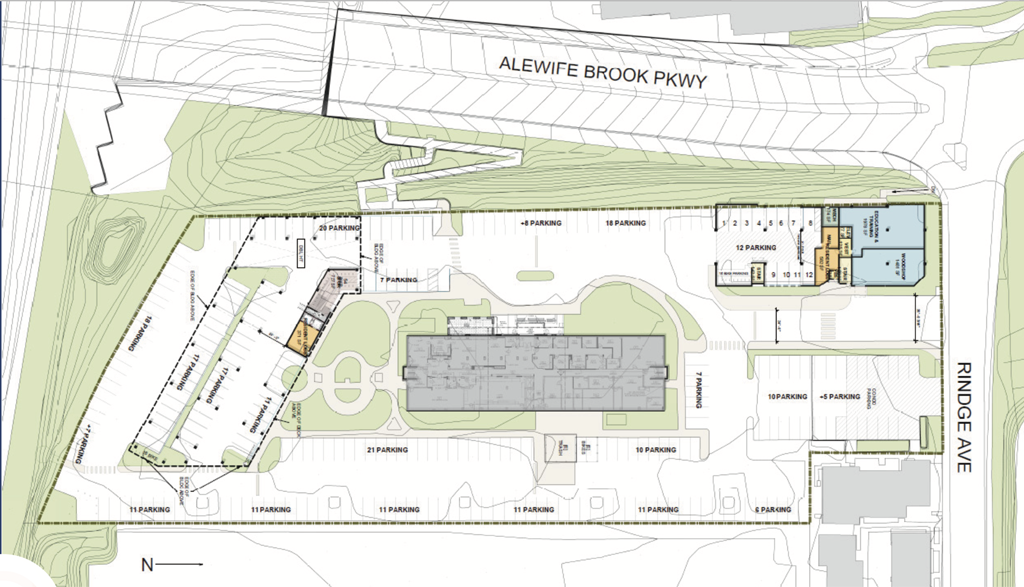 The Rindge Commons buildings would go at the front and rear of an existing Just-A-Start tower.

“How can they in good conscience crowd more poor people on this painfully inadequate site – a site which already is at the highest residential density in the city?” asked Bob Simha, a lecturer in the Massachusetts Institute of Technology’s Department of Urban Studies and Planning.

Though the spot is within easy walking distance of the Alewife red line T stop and its bus station, “not everyone’s employment is on public transportation – or I should say, within reasonable public transport,” another meeting attendee said in a shared email. The loss of parking could be particularly painful for people working a common job in this gig economy: Driving for Lyft or Uber, or for delivery services such as DoorDash.

The first building – which would bring 25 units of housing – would go up at Rindge Avenue and Alewife Brook Parkway, according to Nicholson and Nagy-Koechlin. The second, with its roughly 75 units, would begin construction at the rear of the property when the first building opens for use. All told, about 25 parking spaces are expected to be lost, Nicholson said.

Ultimately, at least 200 people are expected to join the existing population of around 600 in the 273 units of Just-A-Start’s tower. Next door are 504 units in two more towers called the Fresh Pond Apartments. All told, there are now around 1,159 people concentrated on the block.

Affordable housing is “sort of the highest priority in Cambridge right now,” Nagy-Koechlin said, especially with the mix of one-, two- and three-bedroom units expected in Just-A-Start’s proposed structures. (There are 21 existing studio apartments, which the officials said were enough for the site, but no current three-bedroom units.)

“We believe that the amount of units we’re adding is not excessive. We’re not trying to put another 22-story tower and 300 additional units on the site,” Nicholson said.

Plans include a rooftop meeting space for use by the public; community space such as a computer room that will be open to Rindge residents; and 25,000 square feet of commercial-style space that would include 10,000 to 13,000 square feet for a “community-oriented commercial use” such as a health care facility, Nicholson said. “It could be Cambridge Health Alliance. It could be another health care provider.”

Just-A-Start is in talks with a potential partner for that space, but doesn’t have a commitment, he said.

The remaining space would be for Just-A-Start’s worker training and YouthBuild construction education programs, allowing the organization to rethink the use of a leased basement on Cambridge Street and be less at the mercy of Bunker Hill Community College for lab space, Nagy-Koechlin said.

“Our workforce development training programs are bursting at the seams, training probably about 50 people a year for jobs in booming Cambridge industries like biomedical and information technology. We need lab space, we need a classroom space that we control,” Nagy-Koechlin said. “This is our opportunity to meet that need and take those programs to the next level.”

It’s an argument similar to one made by city councillors – that the city should build affordable housing on parking lots it owns – while some have also pointed out that some support for a controversial Affordable Housing Overlay zoning proposal resulted from the difficulty affordable-housing builders experienced finding places to build. The “low-hanging fruit” in the Rindge plan is that it’s on “property that we control,” Nagy-Koechlin said.

A survey at Just-A-Start properties around Cambridge asking residents about priorities got significant responses about workforce development and access to health services, he said. The tradeoff can be traffic and parking.

Residents who attended community meetings said they’d been told some 40 spaces would be lost and felt parking lots such as where the 83 bus turns around were already “overflowing.” But the developer said its traffic and parking studies disagreed.

“We are obviously aware of the need for parking for our residents,” Nicholson said, but Just-A-Start finds that citywide, only about 28 percent of its housing applicants have a car – an argument in favor of the expected ultimate ratio of 0.66 of a parking space per person. While roughly 66 percent of people at Rindge have cars, “it’s second and third cars that fill up the rest of the parking lot. And even with that additional parking, we’re still only at 85 percent of capacity. We are not at any point 100 percent occupied.”

Some of those cars are likely used for work, but a survey showed some are kept around “for emergency purposes,” Nicholson said. There may be room for some second or third cars to be accommodated after Rindge Commons is built, though “we can’t guarantee it.”

After the new buildings go up, people trying to get out of the parking lot at morning peak hours should see only a two-second delay, according to Just-A-Start studies; coming back in the evening would see a four-second delay on the streets off Rindge Towers and the proposed Rindge Commons. “Realistically, the overall impact is not tremendous,” Nicholson said.

Just-A-Start planned to improve open space for children and playgrounds, but said residents opposed having retail or restaurants on the site that could further complicate traffic and parking. Though city staffers showed Just-A-Start plans dating back to the 1980s for a pedestrian bridge to the Fresh Pond Mall over railroad tracks, building it is “outside our capability,” Nicholson said.

Simha, who has been tracking the project for months with others in the neighborhood, wanted more.

“They don’t take any initiative,” he said of Just-A-Start. “And no one holds them to account.”

The site is in a flood plain, and Just-A-Start says Rindge Commons will keep residents off the ground floor above rising waters and plans to make that ground-floor space easier to recover after waters recede – but critics say more could be done to prevent flooding, such as by adding greenery, and to work toward making a public amenity out of Jerry’s Pond, which is just across the street, but fenced off and in need of pollution remediation.

The area remains busy in terms of zoning, and there are two nearby projects in the early stages: 26 acres in the Quadrangle across Alewife Brook Parkway from developer Cabot, Cabot & Forbes; and at 52 New St. site next to Danehy Park, where Just-A-Start is said to be preparing another affordable housing project. Just-A-Start didn’t respond last month to a request for comment about that site.