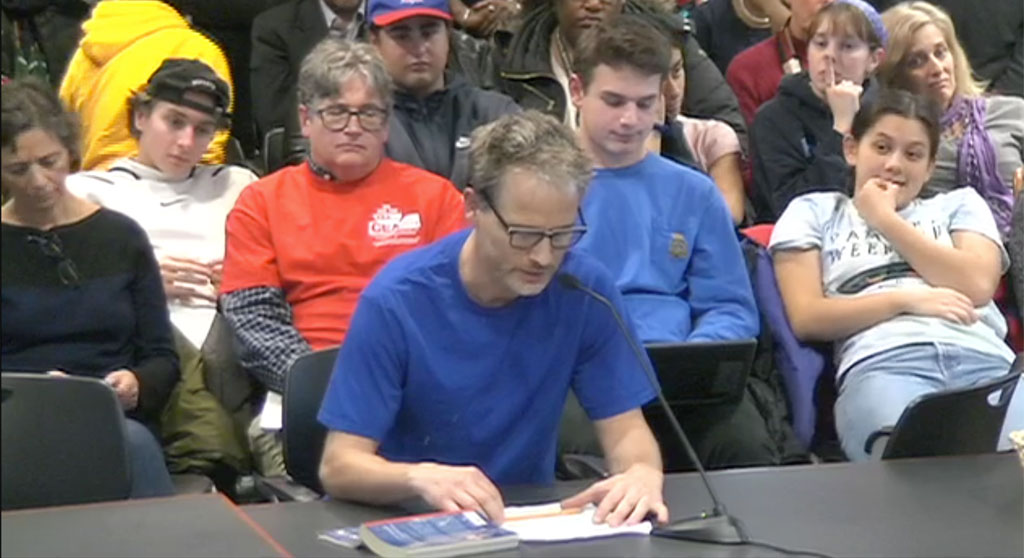 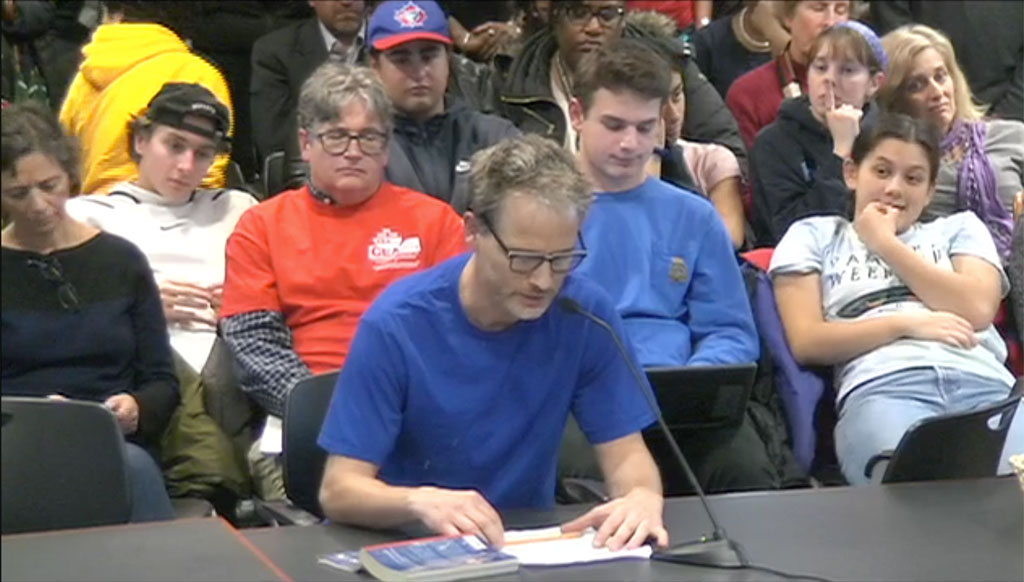 Jon Baring-Gould, a ceramics teacher at Cambridge Rindge and Latin School, speaks at Tuesday’s meeting of the School Committee in a screen capture from Cambridge Educational Access.

A high school art teacher was escorted off campus Wednesday by a member of the campus’ safety/security team “out of an abundance of caution” after angry students gathered calling for him to answer questions about public commentary at a School Committee meeting the night before, according to Cambridge Public Schools officials. At the meeting, he had spoken in support of a committee member criticized by many for using a racial term in a January classroom panel discussion.

Safety/security team members were called “to deescalate the situation,” and Jon Baring-Gould, who teaches ceramics, left with a guard but was “not approached by any students,” superintendent Kenneth Salim said in an email late Wednesday. Another staff member then drove Baring-Gould to a meeting where he was expected.

While there was concern from teachers elsewhere in the district that Baring-Gould’s studio at Cambridge Rindge and Latin School was vandalized and student artwork destroyed, Salim said only that “Some student artwork may have been damaged during this emotionally charged incident, but CPS is not responding to this aspect of the incident as an act of vandalism.”

Further comment was limited by a district policy of not commenting on matters of personnel or individual student discipline, Salim said.

There were race-based issues elsewhere on campus as well, with students reporting after the school day had ended that they’s seen teachers questioned about whether they were helping rid the school of a culture of white supremacy; and that an assembly had been held at which students were allowed to vent their frustrations and concerns about that culture.

Students reportedly gathered Wednesday to try to get Baring-Gould to accompany them to a room used by the Black Student Union to talk. Salim confirmed that students had questions in response to Baring-Gould’s testimony Tuesday about committee member Emily Dexter speaking the full “N-word” once in an academic context – a history class panel called “Reclaiming: [N-word] vs. Cracker: Educating Racial Context in/for Cambridge” looking at why those terms and others could not be researched by students through high school computers.

“Many colleagues that I’ve spoken with about this do not want to step forward and have their voices heard because they are afraid – they are afraid of the backlash that may occur if they do speak out,” Baring-Gould said. But he explained that as a CRLS graduate, he had been taught “to speak up when I saw something that I felt was unjust.”

He was the only public speaker Tuesday to speak directly in support of Dexter, though others were critical of the School Committee, district administrators and the report that looked into the Jan. 10 classroom panel discussion; Dexter’s return to the class Jan. 17 for a poorly received attempt at a discussion and apology; and the role of teacher Kevin Dua in organizing and leading the discussion. Dua is also the faculty leader of the school’s Black Student Union.

In addition to supporting Dexter and disagreeing with a Cambridge Education Association teachers’ union statement that the report was “an example of culture of white supremacy,” Baring-Gould called it a worthy “investigation into a teacher whose actions may or may not have warranted an investigation.”

Target on a T-shirt

But what may have been most provocative was the symbolic way Baring-Gould chose to dress.

“I am worried that because I’m showing my support here, I will be targeted. A colleague gave me this shirt to wear with a little target on its back for my belief in saying what I feel needs to be said,” Baring-Gould said.

Four later speakers referred to Baring-Gould’s shirt scornfully, saying that it wasn’t a white teacher who was targeted at the high school, but black students. “I have to walk every single day through the world as a black woman and feel the target that he gets to easily put on as a joke. He gets to come here and say that he is targeted. He’s not targeted. We are the targets,” one student said.

Leo Barron, managing editor of high school news source The Register Forum, said he’d come to the meeting to report on it, but found Baring-Gould’s choice of T-shirt “crazier” than the situation the arts teacher had come to speak on.

As a fellow white person, Barron said, “There is no target on our back.”

But then Barron flipped his script, saying that Baring-Gould had spoken – and therefore dressed – accurately: “There’s a target on the back of people who say racist things like that man, and that is right. There should be a target on your back. … You should be called out for what you are doing, and what you’re doing is wrong.”