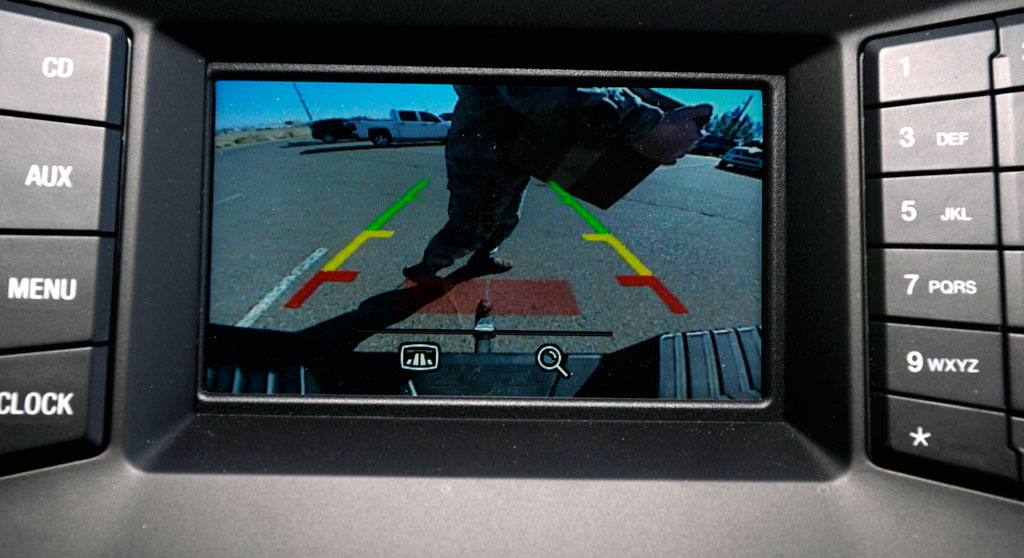 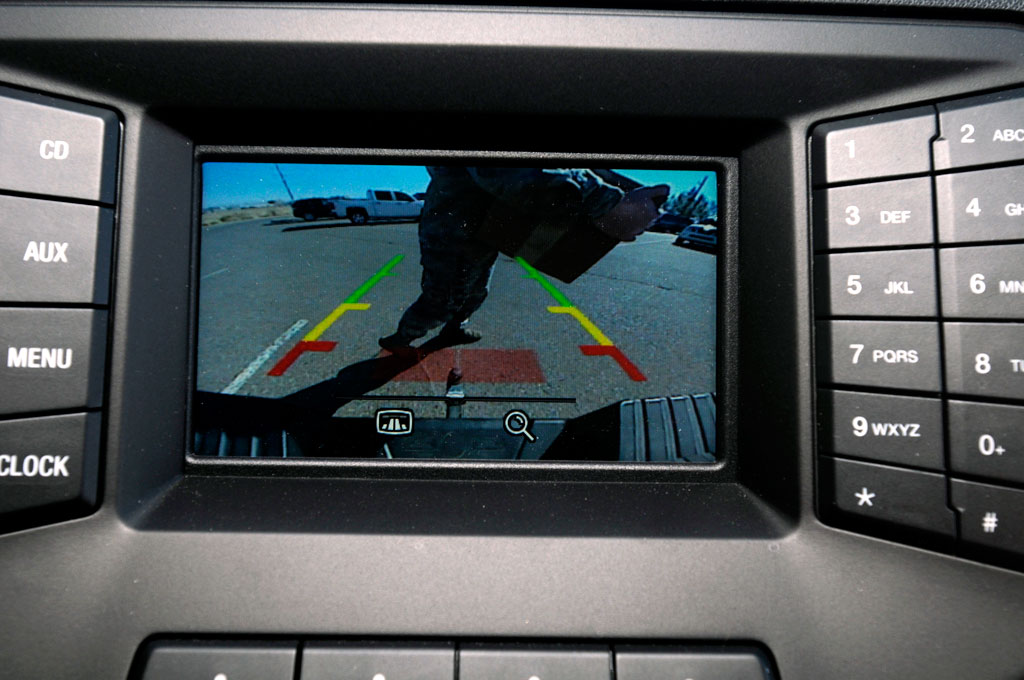 The driver’s view from a backup camera when there’s an object or person behind the vehicle. (Photo: Keith Wright / U.S. Air Force)

Friends of Jie Zhao, the young woman who was killed last year when hit by a dump truck, are campaigning for a mandate requiring large trucks to have cameras allowing drivers to see behind them.

The circle of Zhao’s friends, many of whom attended the Massachusetts Institute of Technology with her, is supporting bills introduced this year in the state Legislature. One, proposed by state Rep. Marjorie Decker, a Democrat of Cambridge, would require backup cameras on trucks owned or leased by the state or by cities and towns. The dump truck killed Zhao while backing up.

The other bill, by state Sen. Patricia Jehlen, a Democrat of Somerville, would apply to trucks owned or leased by the state, not communities. And instead of requiring rear cameras, it would order the Registrar of Motor Vehicles to “consider” a mandate and allow it to order one.

All new passenger cars have been required to have backup cameras since 2018. A federal law mandating the cameras, sparked by the death of a boy who was killed when his father unwittingly backed over him, was approved in 2008 but it took until last year for federal regulators to complete the rules. Meanwhile, the auto industry adopted the cameras without the regulations and roughly half of new cars had the technology in 2014, according to federal auto safety regulators.

Jehlen’s bill is further along in the legislative process than Decker’s measure; Jehlen’s proposal is now an amendment to broader legislation to reduce traffic fatalities. The main bill was cleared by the Senate and is now in the House Ways and Means Committee. Decker’s bill is in the Joint Committee on Transportation and has not yet had a hearing.

In an interview, Jehlen said she supported the stronger language in Decker’s bill but legislators were generally reluctant to adopt something new without having it explored in a “full legislative process.” As an amendment, Jehlen’s bill did not have a hearing. Jehlen said she knew of no opposition to the idea of requiring backup cameras on trucks.

Jehlen said she introduced her measure after Zhao’s friends approached her. The friends also contacted Decker, said Kezi Cheng, 26, who met Zhao at MIT and is now a doctoral student at Harvard.

Decker, asked about her bill, said through an aide that she does not respond to questions from Cambridge Day. A staffer at the Transportation Committee said the legislation will get a hearing in the next six weeks.

Cheng said she also spoke to Mayor Marc McGovern about having the city require backup cameras on trucks. McGovern “is very receptive but wants to wait to see if [state] legislation is passed before acting,” Cheng said.

McGovern said Monday that he is working with Decker and is talking to City Manager Louis A. DePasquale “about how to get cameras on all city trucks. This is a very important safety measure that needs to happen.”

In general, it was unclear why the state and individual communities needed a state law to require that their own trucks have backup cameras – the goal of the bills now under consideration in the Legislature – rather than simply installing the cameras.

Dump trucks and other large vehicles have substantial blind spots in front, beside and behind the truck. It’s not only pedestrians who are at risk; backing trucks have posed more danger to workers in construction zones.

An industry group, the American Road and Transportation Builders Association, says trucks backing up on construction sites kill at least one worker a month. The U.S. Occupational Safety and Health Administration says that between 2005 and 2010, more than 194 construction workers were killed by vehicles backing up. Dump trucks were the type of vehicle that killed the most workers: 67.

The federal agency says employers can reduce the danger to workers with technology such as cameras, radar, and electronic “tags” worn by workers in a construction zone.

Desroche, the driver of the truck that killed Zhao, had a backup camera on his dump truck but it was not working. At his trial, the judge and Desroche’s attorney emphasized to jurors that such cameras are not required and the lack of a working camera couldn’t be considered evidence that Desroche was driving recklessly.

This galvanized Cheng and Zhao’s other friends to campaign for a requirement. “I never want to hear that again,” Cheng said. “That’s something I want to change.”