‘Uncut Gems’: Scheming knows no bounds, but walls, and Kevin Garnett, are closing in 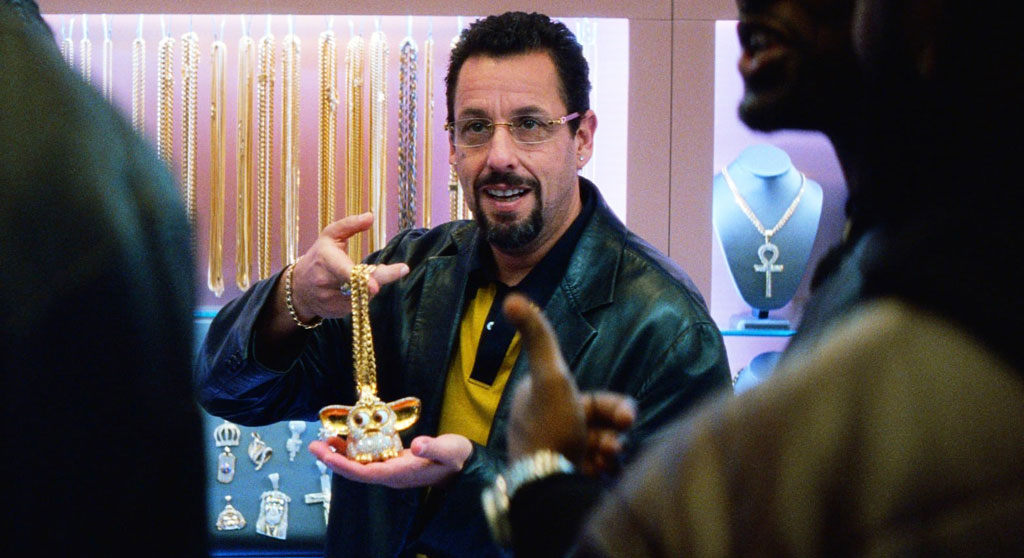 ‘Uncut Gems’: Scheming knows no bounds, but walls, and Kevin Garnett, are closing in

Fraught with edge-of-your-seat tension, “Uncut Gems,” the latest from Boston University-educated brothers Josh and Benny Safdie, stars Adam Sandler as a shady New York City jeweler in deep with the mob for a gambling addiction that knows no limits. The brothers’ last film, “Good Time” (2017) rode a similar arc with a protagonist (Robert Pattinson) living on the criminal fringe, making unwise choices that only amped up a sideways situation. The poor decisions there felt earnest; here, as Sandler’s Howard Ratner teeters atop the tip of a needle 24/7 and so routinely choses the most cataclysmically loaded option at hand, the orchestration of edginess feels calculated and engineered for the sake of taking it up one more notch. That heavy foot takes something away, but still the film remains a scalding-hot sizzle from frame one to the surprising last shot. 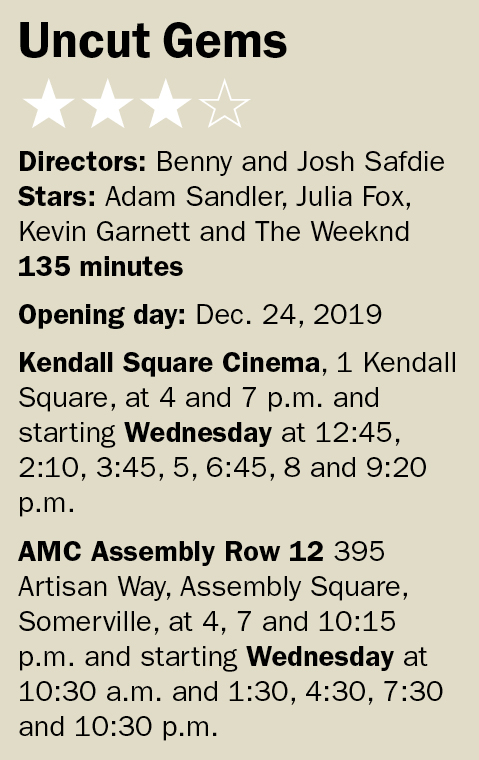 Much will be made about the choice to cast Sandler in a dramatic lead – he’s known mostly for slack, sophomoric fare such as “Happy Gilmore” (1996) and “The Waterboy” (1998) – but folks can all take a deep breath; the New Hampshire native is more than fine, and feels minted for the part of an overly intense New York Jew with big ambitions, self-destructive addictions and a penchant for bad life choices.

The fun part here for Boston peeps is that old friend Kevin Garnett pops up in the cast, playing himself (KG!). If you’re thinking it’s his latter Brooklyn Nets years, think again – he’s with the Green, as the year (we’re told during a colonoscopy) is 2012, and the Cs are playing the 76ers in the Eastern Conference Semis (the LeBron-led Miami Heat would win the title that year) with KG winding his way through New York between road games with Philly. What’s KG got to do with a two-bit hustler? He’s buds with a streetwise operator named Demany (LaKeith Stanfield, so good in “Sorry to Bother You”) who stores his Rolex stash at Howard’s cramped showroom in New York’s jewelry district. Meanwhile Howard gets a covert shipment (in a fish belly) of Ethiopian opals, all glommed together in a two-fist mass. Garnett catches a glimmer of the stone, feels a mystical emanation and decides he wants to hold onto it for good luck during the next game. His collateral? The 2008 NBA championship ring he won with the Cs, which Howard pawns immediately, putting the whole enchilada on Garnett and the Celtics to take down Philly, playing home court.

Howard’s an impulsive sort. Did I mention he’s big into a loan shark (Eric Bogosian, excellent) who has close family ties with Howard (they do Passover together, which is awkward, to say the least)? Then there’s Howard’s discerning wife (Idina Menzel), hot and onto it all, and the kept woman he puts up in a posh pad (Julia Fox, who should ride a breakthrough wave after this) and the two sons he hardly ever sees as he bounces from one dicey situation to the next, buying just enough time to make the next poor choice, ever adding to a mounting shitstorm of lies and imminent retribution.

Of course push comes to shove as collection goons and KG’s bodyguards come a-banging at the door – let alone an angry showdown with R&B sensation The Weeknd. Through it all, Howard, something of a shrill distant cousin of Dustin Hoffman’s brilliant Ratso Rizzo from “Midnight Cowboy” (1969), keeps squirming even when there’s no place to go. The Safdies aim big and get dangerously close to the edge. What holds it all together, besides a fine ensemble peppered with a bevy of nonprofessionals, is the moody cinematography by Darius Khondji and Daniel Lopatin’s edgy, retro score. Between Sandler’s fast-talking Howard bouncing between a tandem of bruisers with bad intent, a well-fleeced customer on the hook but losing interest and a disgruntled Garnett in such tight confines, the cumulative effect overwhelms with purpose and anxiety-inducing intent. Throughout it all you know something has to give, but you just don’t know when and where the bottom’s going to fall out.

As far as the real-life basketball series goes, the Safdies don’t choose to alter history à la Quentin Tarantino, but they do enhance it: KG attributes an early game success to having possession of the titular Ethiopian stone. The one question I had: Was Garnett playing himself, or a pumped-up incarnation? As the demanding latter, the ex-Celt only adds to the mayhem that makes “Uncut Gems” a grabber from the get-go.