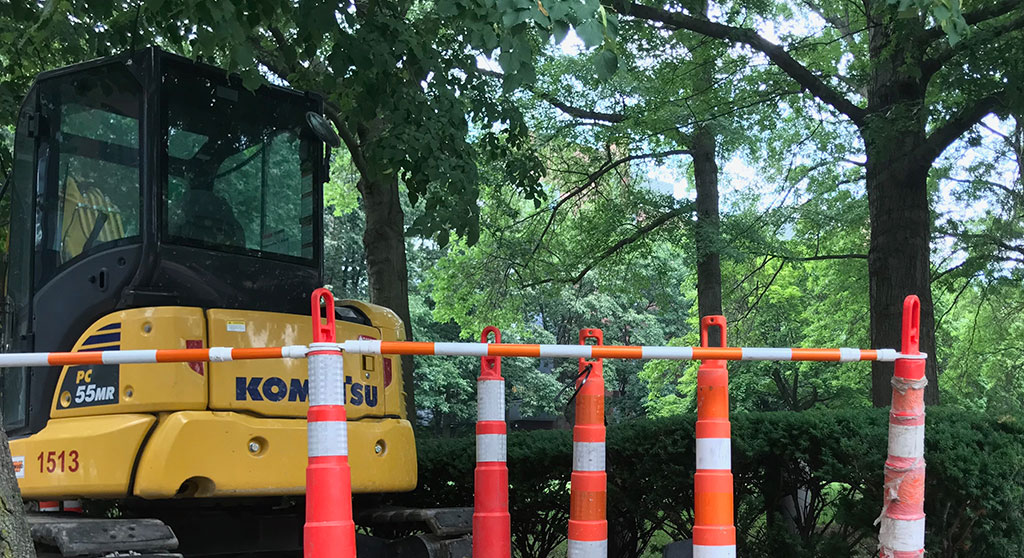 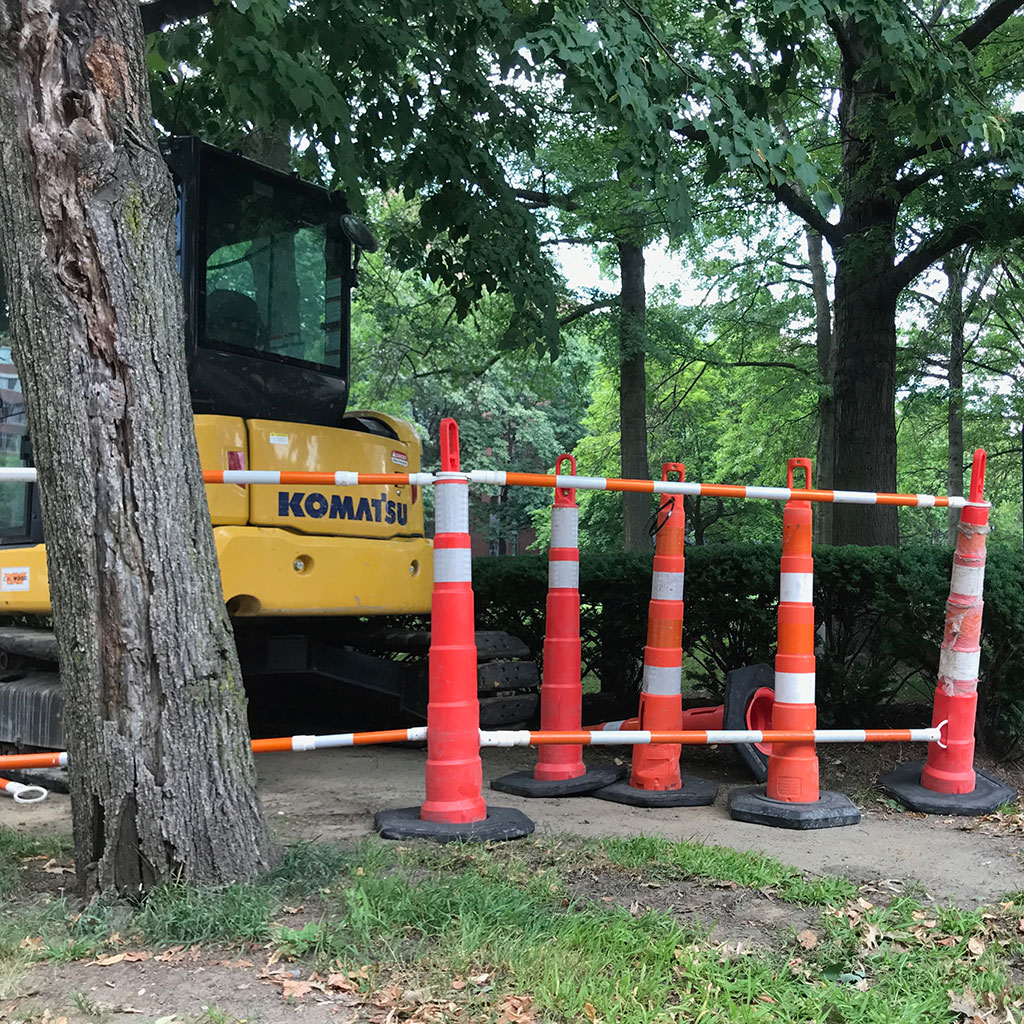 Restrictions on removal of significant trees are up for debate again among city councillors. These trees are in Kendall Square. (Photo: Marc Levy)

Limits on chopping down trees on private property need more discussion before a temporary renewal, city councillors decided Monday, calling for data from the city and testimony from residents about the law’s effects over the past several months.

The process for a tree-cutting permit, often referred to as a moratorium, was put in place to give the city’s Urban Forest Master Plan Task Force time to come up with a full answer to Cambridge’s dramatic loss in tree canopy. But its report due in June didn’t appear until December, and now more time is needed to discuss its suggestions, said councillor Quinton Zondervan, the driving force behind the task force and moratorium. Allowing the moratorium to lapse before a new tree protection law is in place “would almost certainly result in a massive citywide cutting spree” like the one seen before the moratorium was enacted, he said.

Zondervan hoped to see the moratorium extended to Dec. 31.

Sending the renewal to committee won’t necessarily cause a gap, because there are several meeting dates for discussion and a vote before it expires either Feb. 25, a year after Zondervan’s original motion passed, or March 11, the enactment date. But there was concern nonetheless.

“I live in a neighborhood where several people did take down their trees as soon as it was announced [last year] this might come out – they went out and cut down trees pretty much immediately before the moratorium took effect,” said Patty Nolan, at her first meeting as a newly elected councillor. “For many people who do know about this, if the date slips and we have any kind of window in which they can take trees down, they will.”

Some said Monday that they endorsed a committee hearing before a vote because they felt the moratorium had been put in place so quickly that it didn’t get a full public process – a sentiment expressed from the audience as well as by councillor E. Denise Simmons, who recalled being “a bit taken aback on how quickly we put through this moratorium.”

Others said it was necessary to hear how the moratorium was functioning.

“There has not been an opportunity for the public to come and talk to us about how this is affecting them and their property and their pocketbooks,” vice mayor Alanna Mallon said. During the fall’s campaign season, “I know we just all knocked on a lot of doors and talked to a lot of people about how it’s kind of hitting their pocketbooks in ways that we might not have imagined.”

The many exemptions to the moratorium – such as for utilities, public land, developments for affordable housing or for projects of more than 25,000 square feet – was another criticism faced before it was put in place last year. During debate a year ago, then councillor Craig Kelley noted that it wasn’t a moratorium at all for people who could afford to pay fines associated with taking down a “significant” tree of 8 inches or more in diameter at chest height.

But some exemptions were added during a legislative process that began with the full council on June 18, 2018, before getting a packed Ordinance Committee hearing Jan 9, 2019. When it came back to the full council Jan. 29, it failed and was returned to the Ordinance Committee before a final vote Feb. 25 – a four-meeting process encompassing one and a half months, if the math excludes the original committee referral made nearly eight months earlier.

Marc McGovern, the councillor who on Monday referred the extension to committee, also repeated a thought from a year earlier: “It was framed as ‘We have this tree canopy emergency and therefore we have to move quickly.’ I’m not doubting that. I am saying we have a lot of emergencies in the city, and my guess is that if we were going to say ‘We have a homelessness emergency, let’s open a temporary shelter’ and we did so without any public meeting, without any data, without any feedback, my guess is that people would be upset.”

Expressing a wish to “do our due diligence and follow a process [of hearing from people] even if we think something is this important,” McGovern repeated an anecdote from the campaign trail about someone in West Cambridge who wanted to cut down a tree on private property but “wasn’t allowed to because of the moratorium.” The tree fell on the owner’s house and caused $20,000 in damage not covered by insurance because it was considered “an act of god,” McGovern recounted.

Cambridge’s law, however, allows removal of a tree that is dead, dangerous or “poses significant negative impact to an adjacent existing structure,” leaving it unclear what role the moratorium played in the anecdote.

Another qualm: “We are essentially voting to extend this without any data or information,” McGovern said.

That was not wholly true, according to Nolan and Zondervan, citing Department of Public Works data delivered to the Urban Forest Master Plan Task Force. Around 300 applications for tree cutting were filed in the past year and “the vast majority were approved because they were dead or dangerous trees,” Zondervan said. “There were two instances where people chose to simply pay the fine and cut down the tree anyway.”

“Of course, what we cannot know is how many trees were not cut down because people chose not to even file for a permit,” Zondervan said.

The city lost 18 percent of its tree canopy in less than a decade before the task force was formed. Looking at data a year ago, a city consultant said a planting rate of up to 600 trees annually and an optimistic tree mortality rate of no more than 5 percent still meant a tree canopy reduced even further reduced by more than 60 percent in the next 11 years.

“I was very careful in this amendment so that it’s really just extending the deadline and not reopening the discussion about the moratorium itself, because that obviously could get very complicated,” Zondervan said. “The whole point is to give ourselves time to have that full discussion about how we best protect our tree canopy. We all agree, myself included, that this is not the way to do it permanently.”

The moratorium will likely get the discussion Zondervan hoped to avoid: McGovern’s motion to move debate to Zondervan’s Health and Environment Committee passed 6-2-1, with Zondervan and the newly elected Jivan Sobrinho-Wheeler opposed; councillor Dennis Carlone had to leave the meeting early and did not vote.