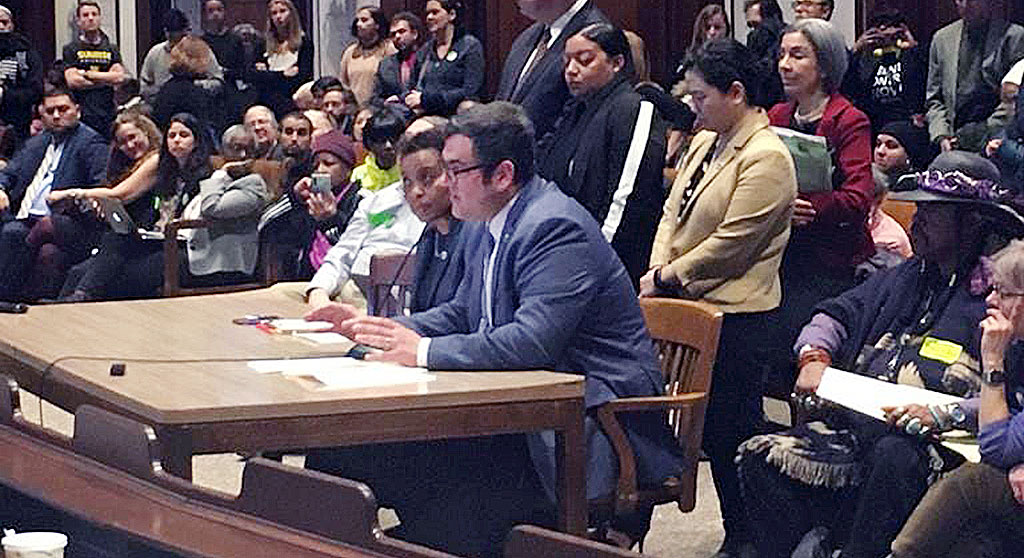 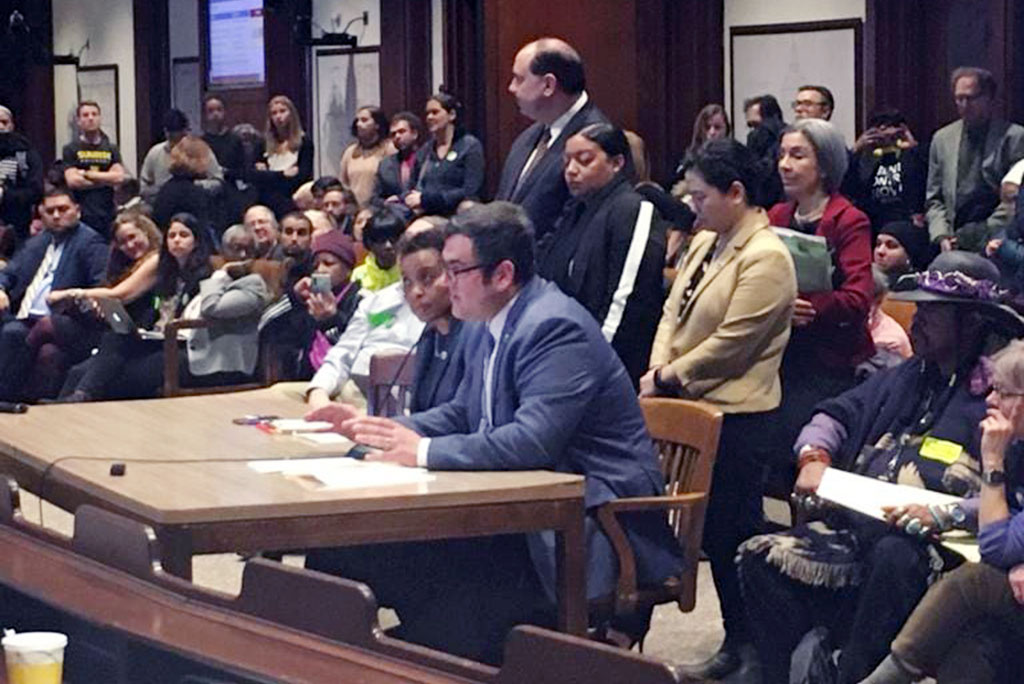 Several hundred tenant advocates from Cambridge and other area communities, and a few landlord representatives, crammed into a State House hearing Tuesday on bills to protect tenants, including a proposal by state Rep. Mike Connolly of East Cambridge and East Somerville that would allow communities to bring back rent control. Three of nine Cambridge city councillors testified, but no one from among city administration.

City spokesman Lee Gianetti did not immediately answer when asked why there were no witnesses from the Cambridge city administration. Peter Daly, head of affordable housing developer Homeowners Rehab and a member of the city’s Affordable Housing Trust, said a staff member from the trust attended the hearing. Daly said he couldn’t go because of a conflict, and he didn’t know whether a position on the bills had been taken by the trust, which funds and oversees the city’s affordable housing programs. Minutes of meetings held from January to November last year did not mention the legislation. 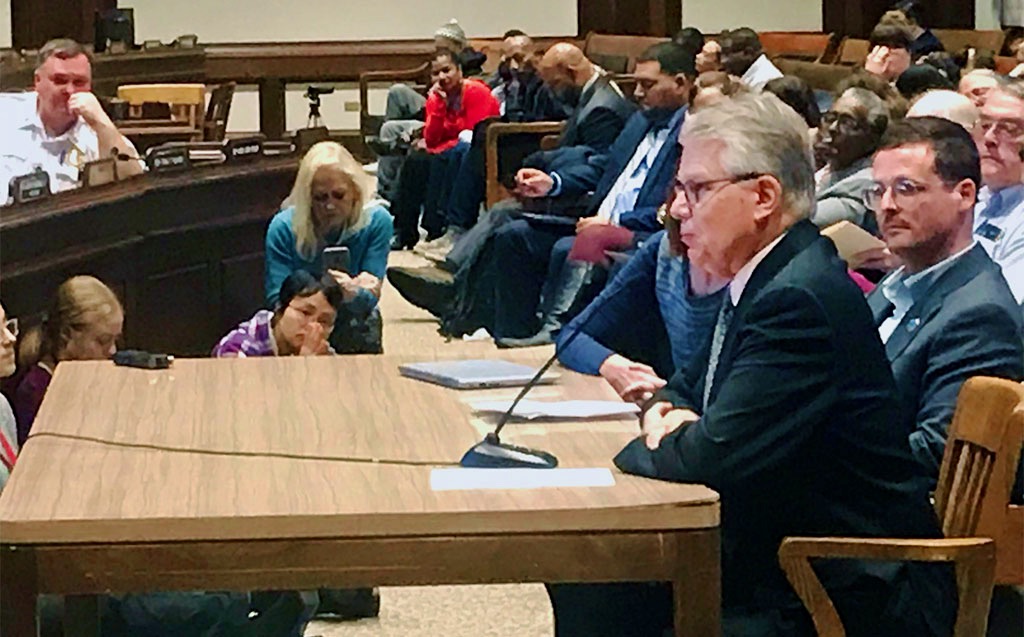 Gianetti was also asked why the city’s Law Department had not responded to a City Council vote a year ago approving a home rule petition for a fee on real estate transactions over $2 million that would raise funds for affordable housing. The department was supposed to write the necessary legal language for the petition, councillor Dennis Carlone said in an interview, but councillors are prepared to go ahead with their own language if the city solicitor doesn’t produce the petition by next month.

Cambridge politicians and city officials have long espoused affordable housing. The city has spent tens of millions of dollars on low- and moderate-income housing; requires residential developers to set aside some below-market units; and collects an “incentive” payment from commercial developers based on square footage. Yet rents and home prices in the city are ballooning as fast, or faster, than prices in nearby communities.

Described as an emergency

Witnesses at the hearing described the situation as an emergency, with tenants speaking of $700 rent increases even for apartments of questionable quality. “I’m afraid to go to sleep,” said a Boston great-grandmother after reportedly finding rat droppings in her bed. “No one should have to live in these conditions.”

A Chinatown man said via a translator that he was paying 60 percent of his income for rent and waiting to get into senior housing. When 90 units in a luxury building were set aside as affordable housing, thousands applied, he said. “My income is too low for affordable housing anyway,” he said.

Schachter, from Somerville’s eviction prevention office, said it would take an estimated 17 years to house all the elderly or disabled applicants on Somerville’s public housing waiting list. In Lynn, the 8,000 applicants for senior housing face a wait of eight to 10 years, another witness said. As of last July 25, there were 9,686 families and individuals in Cambridge waiting for public housing.

Tenant advocates focused on Connolly’s bill and another proposal that would allow cities and towns to adopt a real estate transfer fee without getting permission from the Legislature – like the home rule petition approved by the Cambridge City Council. Connolly’s bill does more than allow the return of rent control; it authorizes municipalities to forbid no-fault evictions, regulate condominium conversions and protect tenants when their building is foreclosed. The bill gives cities and towns the option of adopting some or all of its sections; it does not require them to act.

Other bills considered at the Tuesday hearing would give tenants in a building about to be sold the right of first refusal on buying the units they had been renting.

One of the few landlords in the audience at the hearing was Rebecca Flan of Cambridge, who said her father has a real estate business. The family owns and rents out six condominiums in Cambridge, she said.

Rents are set “based on what they are in Cambridge,” Flan said. She said she opposed rent control. “Rents in Cambridge are high, but there are the amenities,” she said. Asked what people should do if they can’t afford to live here, Flan said: “Go farther out.”

After listening to tenants’ personal stories at the hearing, Flan said she still opposed rent control. “I feel bad for these stories, but there’s got to be a better way than rent control,” she said. “If rent control comes in again, people will leave because they can’t make a profit.”

Three representatives of landlords who testified at the hearing also opposed rent control. They favored increased housing production and government help, such as more tax credits for affordable housing developers and more rent vouchers for tenants.

“Why impose [costs] on the private market?” said Jeffrey Turk, of the law firm of Turk & Quijano, which advertises itself online as “The Landlord Law Firm.” (Coincidentally, Turk & Quijano represents the Cambridge Housing Authority in eviction cases.)

Gov. Charlie Baker said last year that he opposes bringing back rent control; he has introduced legislation aimed at increasing the housing supply by allowing municipalities to adopt zoning changes with a simple majority of the governing body instead of two-thirds. House and Senate leaders have said they’re focusing on the governor’s bill.

Connolly’s bill would repeal the law that carried out a 1994 referendum that banned rent control. At the time of the referendum, only three communities controlled rental prices: Cambridge, Brookline and Springfield. Voters in all three supported keeping rent control, but the ban passed with support from voters throughout the rest of the state.

The law that promulgated the ban is written broadly and prohibits any municipality from forcing landlords to accept below-market rents. The language threatened the Cambridge Inclusionary Housing ordinance when the developer and former owner of 12 Arnold Circle sued the city in Land Court over the decision to make the building subject to inclusionary housing when it is renovated. The suit argued that the city ordinance violated the rent control ban.

The city and developer Edward Doherty settled the suit last month; in return for $250,000 from Doherty to the Affordable Housing Trust, all 12 of the new condos at 12 Arnold Circle will be market rate instead of 10 market rate and two affordable units. Details of the settlement aren’t yet known.

Repealing the state ban on rent control would end that threat to inclusionary housing; city officials don’t seem to think it’s much of a threat. Gianetti said the city doesn’t believe the city ordinance conflicts with the rent control ban and will “vigorously defend the ordinance” against any future challenges based on the state law.

Carlone said another challenge is unlikely because almost all developers subject to the ordinance are putting up buildings and will almost certainly need some kind of zoning relief. They won’t want to cause delays and increase their costs by forgoing the offer of zoning exceptions in the ordinance, he said.

The project at 12 Arnold Circle was unusual because it is an existing building falling under the ordinance because it was allegedly vacant for two years; the developer didn’t need a zoning variance, Carlone said.