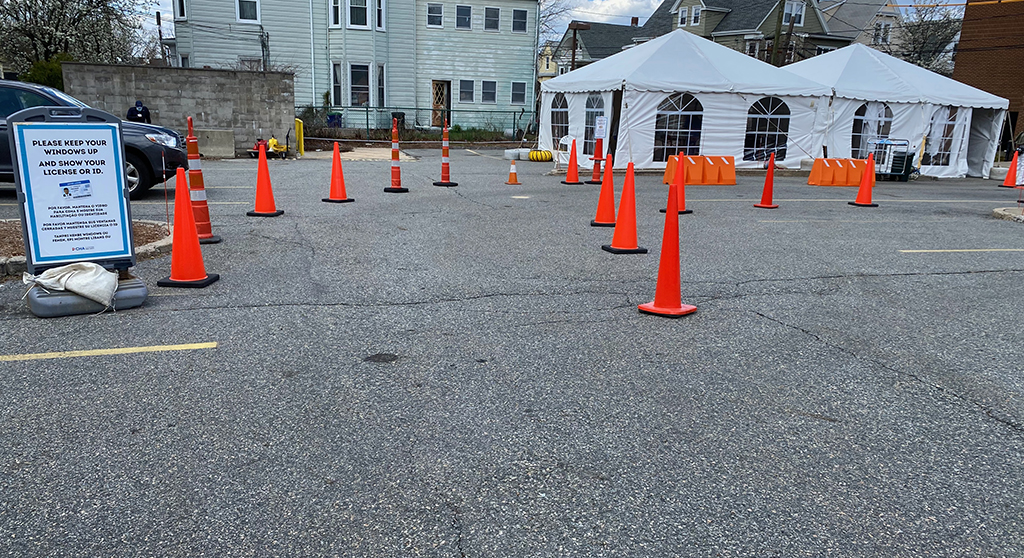 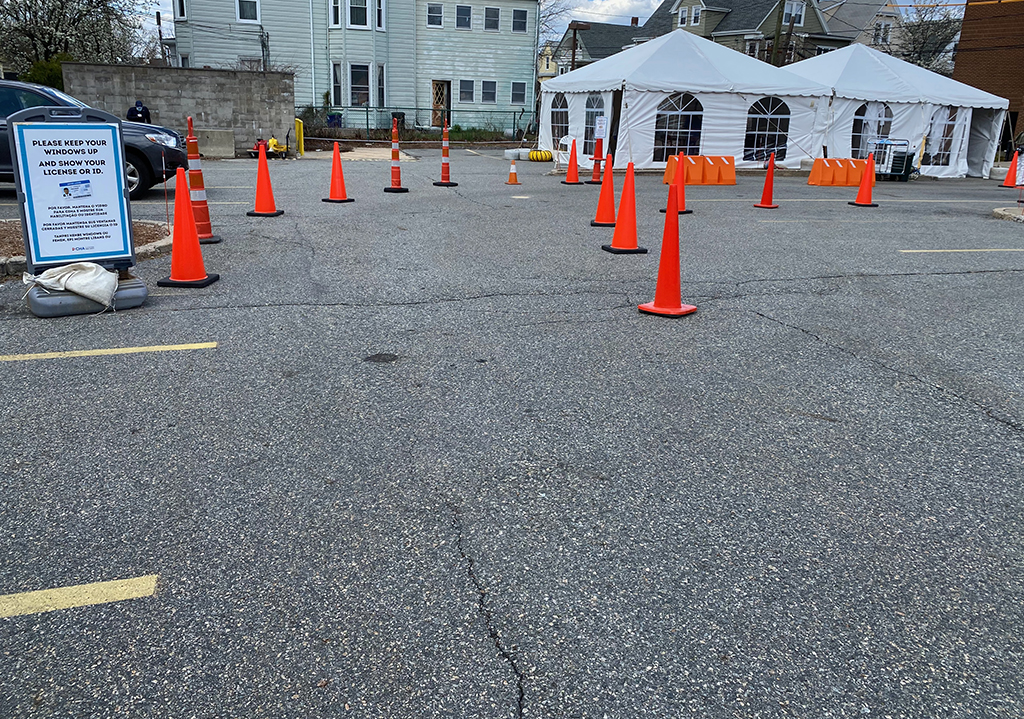 Coronavirus testing by Cambridge Health Alliance, which has been so limited that it often runs out of subjects, is opening to residents of Somerville. (Photo: Marc Levy)

Cambridge Health Alliance is ready to offer its testing program for Covid-19 to the public after receiving 3,500 swabs from the state for taking samples from patients, spokesman David Cecere said Friday. Somerville residents will be the first to benefit, getting exclusive use of the health care system’s mobile testing tent at Somerville Hospital on weekdays.

Cambridge could soon follow with a mobile site in East Cambridge, city councillors were told Monday.

The Alliance had limited testing to its own patients, employees and first responders since the Somerville mobile testing site opened March 18, because of a shortage of testing supplies such as swabs. Those priorities will now apply only on Saturdays.

In addition, Alliance patients will be able to get tested only if they have symptoms of Covid-19, which has been the policy since the mobile site opened on March 18. In contrast, any Somerville resident can get a test, with or without symptoms, a spokeswoman for Somerville said Sunday. They must call CHA first at (617) 665-2928 to get an appointment, according to its website.

Cambridge city councillor Jivan Sobrinho-Wheeler noticed the Somerville announcement and asked Monday why Cambridge had no similar program. City Manager Louis A. DePasquale and Cambridge Health Alliance infectious disease chief Lou Ann Bruno-Murtha said one was coming, though they gave different estimates of when. DePasquale said “probably” early next week; Bruno-Murtha said as soon as “the next couple of days.” Bruno-Murtha said the site would be in East Cambridge, following test sites established in other Health Alliance cities. Neither specifically answered Sobrinho-Wheeler’s question of whether asymptomatic residents could get tests, as Somerville residents will.

Somerville officials “advocated for tests” with the state and coordinated with the Alliance to establish the program, the Somerville spokeswoman said.  She didn’t want to be named. The Somerville health department will get test results and tell residents whether they are infected or not, with Somerville public health nurses counseling residents who test positive how to isolate themselves and urging them to tell their doctor; the city will also offer to transport people to a “shelter” outside Somerville if they can’t quarantine at home, according to instructions to nurses. Nurses will check the health of people who test positive by phone, and workers from a state-funded contact tracing program will get in touch with people they came in contact with.

CHA spokesman Cecere, asked the reason for restricting expanded testing to Somerville residents, said Sunday in an email: “This is a fluid situation that involves coordination with our local communities to ensure proper contact tracing.” Asked why the Alliance could not coordinate contact tracing with the Cambridge Public Health Department – which is run by the Alliance – Cecere repeated that the situation is fluid and said: “We’ll update as we learn more.”

Cecere said previously that the Alliance would work with Cambridge, Malden and Everett “to offer testing to residents as soon as possible.”  Other communities in the Alliance’s service area are being served by testing programs offered by other hospitals, including CHA affiliate Beth Israel Deaconess Medical Center, he said.

Because of the lack of test kits, the Alliance had been performing about 120 tests a day to its own patients who were referred by doctors. “Our goal is to eventually reach close to 500 tests per day across all sites as long as supplies are available,” Cecere said. He didn’t specify whether the Alliance will open other mobile testing sites, CHA’s initial plan when it opened the Somerville test site next to Somerville Hospital. However, Somerville “is exploring convenient and accessible locations in east Somerville for a second site,” the city spokeswoman said.

Many low-income immigrants live in East Somerville; still, the city spokeswoman said “the entire community needs to have access to testing if we want to reopen our economy and community. This is to better understand the spread and infection rate of virus and how we can fight it more effectively.”

Cambridge also has a substantial proportion of people born abroad. Census figures for 2018 show Cambridge with 29 percent foreign-born residents; Somerville had 24 percent. Cambridge also had a slightly higher poverty rate than did Somerville, but the median household income in Cambridge was $95,404, compared with $91,168 in Somerville.

Like many other health care providers, the Alliance had been struggling to obtain testing supplies. The state’s shipment of 3,500 swabs is almost double the number of tests CHA had performed since March 18. Bruno-Murtha said Monday that “I don’t anticipate that testing supplies will be an imminent problem” in expanding testing in Cambridge.

Cecere also confirmed that the Alliance is closing its Somerville Hospital emergency room as planned on April 30 and replacing it with an urgent care center that will be open from 9 a.m. to 9 p.m. “As planned, we will provide care to patients with less acute issues,” he said. CHA won’t do testing at the urgent care center, he said.