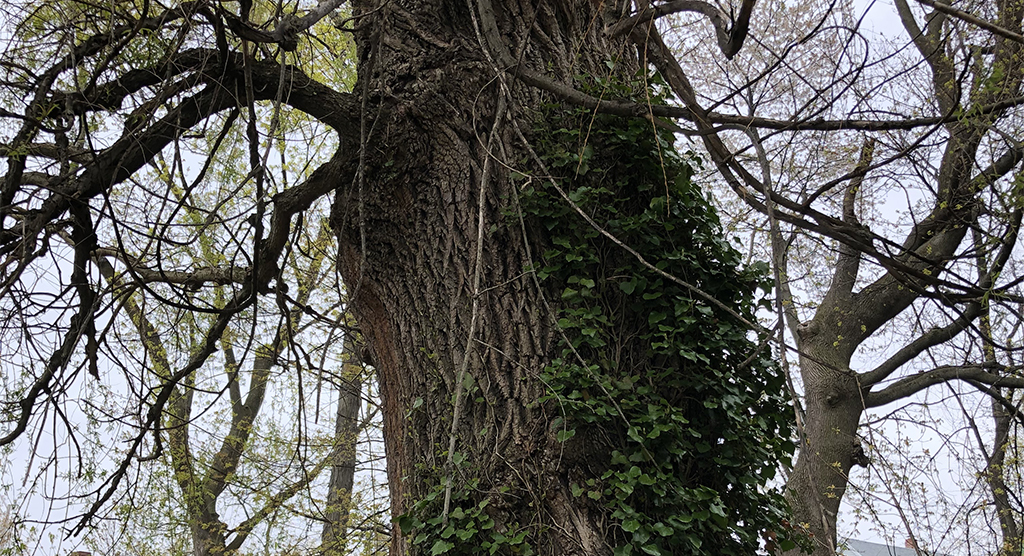 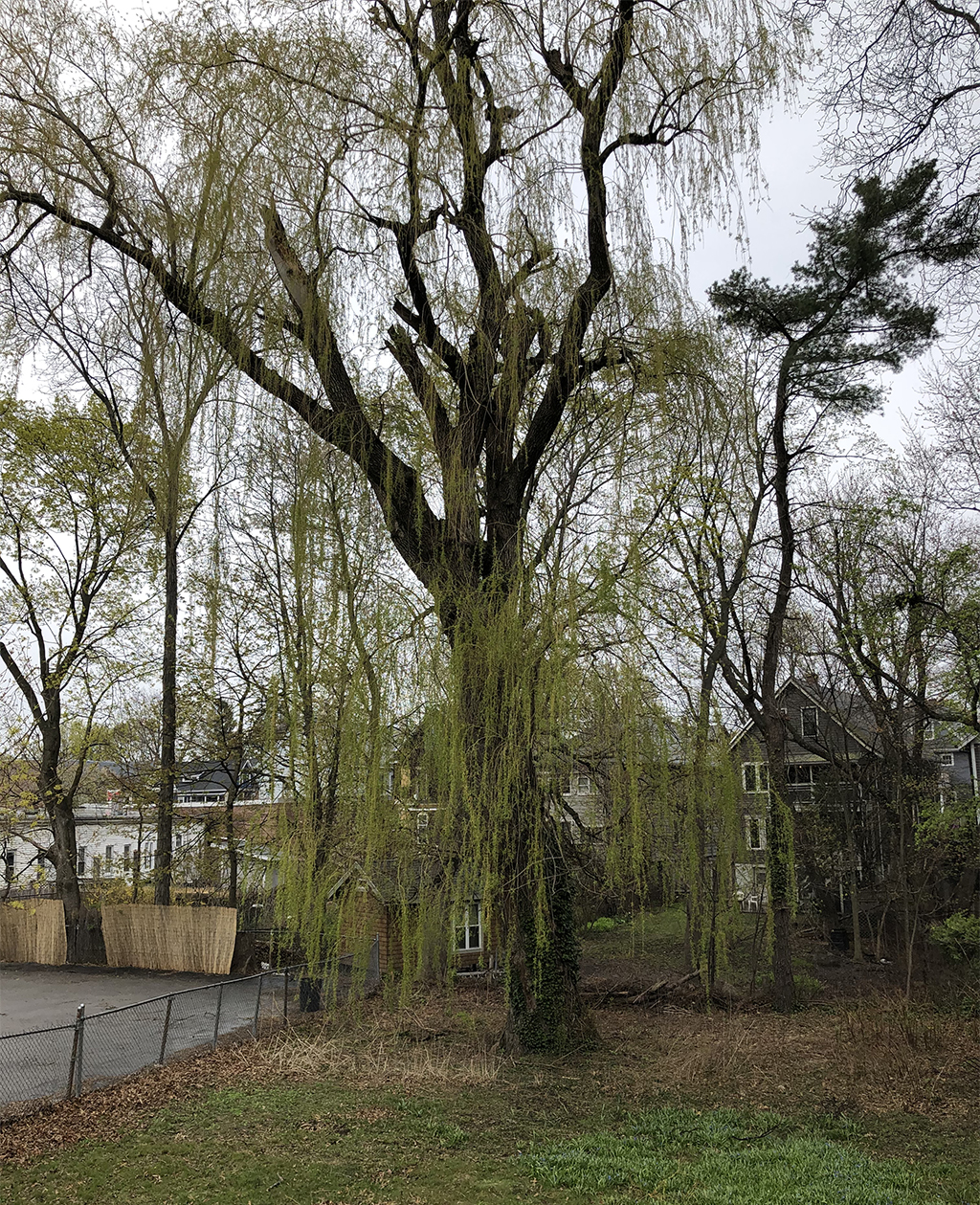 The towering willow tree at 145 Lakeview Ave. has a two-week reprieve from removal. (Photo: Cambridge Trees! via Facebook)

A West Cambridge property owner has agreed to delay removing a towering weeping willow tree, allowing time for a second opinion as to whether it’s in danger of collapse.

The time could be used by neighbors to get a second opinion that the tree is healthy, MacArthur said, or to just agree to “take responsibility if something should happen.”

Update on May 16, 2020: Having heard that there was a differing opinion from an arborist that the tree could be let stand, Duncan MacArthur said he did not plan to remove it.

“It’s dropping limbs, and we feel it’s unsafe. We had an arborist look at it, and he said this thing is coming down any day – really, like this thing’s gonna fall down … that it’s due for catastrophic failure. Those are his words,” MacArthur said Thursday by phone. “We had a willow a few years ago [at another location] that was okayed by an arborist. And then three weeks later, the whole thing just fell over. It toppled over.”

One neighbor said Thursday that he was “happy to help make [a second inspection] happen.”

“It may well be the conclusion that the tree needs to come down. What I called for all along was a moment to breathe and get a second opinion,” said John Goldberg, at 147 Lakeview Ave.

MacArthur’s arborist, Daniel Cathcart, of Plant Healthcare Consultants in Westford, uses vaguer language in a March 27 report made available by the city. It says only that the willow “presents a potential risk over the next two years” and should be taken down.

Along with calling it “magnificent,” neighbors and others in the community have referred to the tree as more than 100 years old. The tree protection ordinance passed by the City Council last year sets a standard for trees that are at least 8 inches around at chest height; the willow on Lakeview is 54 inches around.

But the arborist believes the tree is 60 years old, MacArthur said, and cites a life expectancy of 35 to 40 years. That’s shorter than some estimates, but likely why the report’s conclusion of danger was “based on visual observations only. No examinations of the plant’s interiors were taken, nor were and soil or plant tissue were taken and submitted for laboratory testing.”

There is a large crack up the middle of the tree, MacArthur said.

In addition to the sheer emotion attached to seeing an old tree taken down when it seems to be thriving and the seeming lack of rigor in the report compared with other tree assessments Cathcart has filed, there were other factors at work in the conflict. For one thing, people alarmed by the city’s dramatic loss of tree canopy turned to the city, its tree protection ordinance and to elected and appointed officials for help, and bumped up quickly against their limitations. One neighbor said they felt city staff were abdicating their responsibility.

Neighbors offered to allow city inspectors and arborists onto their own property to assess the tree independently of MacArthur’s paid consultant, or to hire an arborist of their own, yet city staff said they could not and would not act to stop the removal. Maggie Booz, chair of the Committee on Public Planting, said she tried to bring together the body for an emergency video meeting about the tree, but was told that by order of the city manager during the coronavirus shutdown, no meetings are allowed through May 31.

Booz said Thursday that while she felt her committee “needed to weigh in,” she acknowledged it would been able mainly to address longer-term issues about protecting city greenery.

Even before the landowner granted more time for an independent opinion, Owen O’Riordan of the city’s Public Works Department was steadfast in saying the process, such as it was, had worked: An arborist certified that the tree is at “high risk” of failure, which means “we are required to issue the permit and have done so.”

A tree-cutting “moratorium” was passed by the City Council in February 2019 after members were shocked by the amount of tree canopy loss in the previous decade. The moratorium was extended by a year this February, because a more extensive report on addressing the loss of trees and the onset of climate change was slow to come to the council for discussion. Meanwhile removal of significant trees continued, including in Inman Square and Harvard Square, at Christ Church Cambridge and the Harvard Divinity School.

A weakness of the city’s law, said an email from neighbor Kevin McCall, at 117 Lakeview Ave., is that an applicant “can certainly find an arborist [to give an opinion] the owner/developer has directed and paid the arborist to deliver.”

“I am in the commercial real estate business and, regrettably, know this to be true,” McCall said.

Relying on a visual assessment of the health of a tree may be a weak standard, but the city’s law has “not specified the form of analysis that [a landowner] has to take,” O’Riordan said Thursday by phone, amplifying responses from emails with the neighbors: “Everybody was aware of this we executed the ordinance,” and his department is not in a position to determine whether a developer “has acted in a self-serving or disingenuous way – nor should we be asked to make such a determination.”

But particularly because nearly three-quarters of trees lost in the city over the past decade was on private property, “it is unclear at this time as to how effective the ordinance and the amendment to it has been,” O’Riordan said.

Councillor Quinton Zondervan, who helped lead the tree-cutting moratoriums to passage, agreed that there are weaknesses in the protections – weaknesses that residents identified during debate last year, but that councillors in favor of the law weren’t able to overcome. Identifying potential danger as a reason to take down a tree, when even the private arborist Cathcart says “any tree can fail at any time,” is a low bar to clear, Zondervan said Thursday.

“The flaw is kind of built in,” Zondervan said.

He was sympathetic to O’Riordan’s inability to act in the face of the law and individuals’ property rights, he said, and – like Booz – was spending some of his coronavirus shutdown working on ways to make the tree-cutting law tougher. “This kind of incident makes it more real and certainly shows the urgency of improving the ordinance. Which, like everything else, has been horribly delayed by the virus,” he said.

If a property owner doesn’t agree to a second opinion or to pass liability onward, there is no recourse through the city for stopping a tree removal. The only way to block removal would have been a court-issued injunction, Zondervan said.

Neighbors were alerted April 22 in a letter from the construction company that the tree would be taken down. All of their frustration about it was taking place without MacArthur: As neighbors went in circles with the city, the property owner said he heard nothing from them.

It’s true, Goldberg said. “I can understand why he might feel grumpy that communications went to the city rather than to him,” Goldberg mused. “On the other hand, you know, he had said he was planning to cut the tree down. So I’m not sure what the point of a conversation would be.”

It’s Goldberg’s detached garage and the car inside that is the closest structure to the tree, and the most at risk if it falls. So in calling for a delay in its removal, he was “putting my money where my mouth is,” Goldberg said.

MacArthur said he remembered Goldberg agreeing to the tree coming down before the April 22 letter went out (“It doesn’t look healthy. We understand,” is what MacArthur remembers hearing). Goldberg does not. “I don’t recall agreeing to anything. I listened to his explanation,” Goldberg said Thursday.

A question of intent

It is not the first time MacArthur, a builder-developer, has upset neighbors. When he put up a copper-clad modernist home on Grove Street, in a Strawberry Hill neighborhood otherwise known for its 1950s-era “country club” homes, he sparked a call for a Neighborhood Conservation District. Another modernist property went up on land he bought next door.

Though he specializes in attractive, environmentally friendly and high-end homes, like other developers he has been known to take advantage of laws about “renovations” – leaving just enough of an older structure standing to work free of restrictions for new construction. McCall said in an email that he believes MacArthur is willing to “subvert the system.”

In this case, that would mean calling for a tree removal before filing plans for construction, because removing a tree for development is more complicated. “We all know what MacArthur’s plan is: Remove the tree now so it will not be an issue of discussion when, not if, he applies for permits to build on this part of the lot,” he said. “That the company would suggest that it is concerned about the safety of abutters and their property is completely specious.”

Goldberg agrees that MacArthur “certainly has mentioned in the past the possibility of developing that space. Whether he has a present plan to do that or not, I have no idea.”

MacArthur said Thursday that he has no plans to develop the backyard at 145 Lakeview Ave., where he is fixing up the existing house for tenants – one ready to move in soon, and another one due in April.