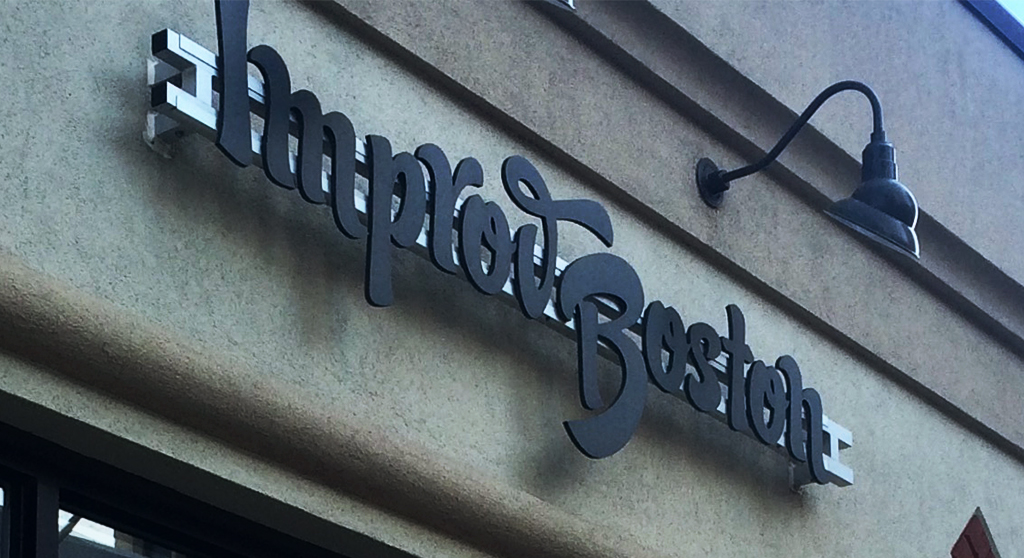 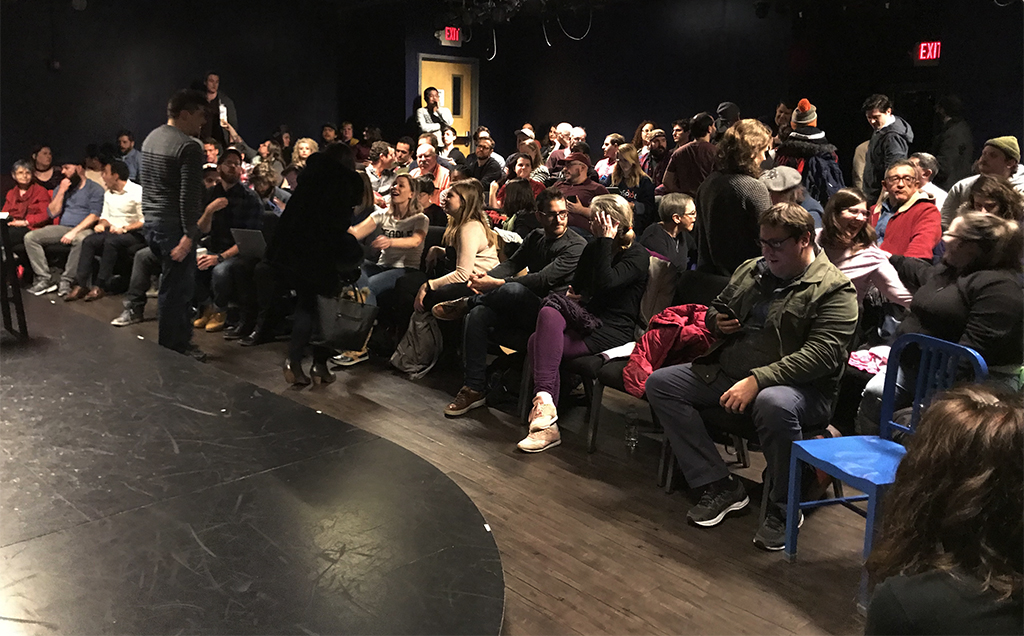 Members of the ImprovBoston community gather for a November 2018 town hall – a kind of crowd all but unimaginable now. (Photo: Marc Levy)

The Central Square comedy club ImprovBoston has lasted for 38 years by using revenue from its weekly shows to cover the costs of its 40 Prospect St. theater, comedy school operations and other work. That changed March 13, when the coronavirus closed the club’s doors. Now it’s been nearly nine weeks, and the nonprofit is turning to fundraising to pull together the money it needs to stay alive until it can again let audiences in – around $75,000 in monthly operating expenses.

“It pains us to say a long-term loss of revenue could mean we never reopen,” managers say in an online explanation for crowdsourced donations.

The nonprofit has a government Paycheck Protection Program loan that runs out June 15. Though management is seeking additional government grants and loans, including at the city level, and larger community donations, “the middle of June is going to be a crisis point,” leaving ImprovBoston with just one or two weeks of operating expenses by current calculations, said Josh Garneau, managing director. “Which is why we are so vigorously fundraising now. We need to act in a way that will get us through this, because we intend to be a fully committed member of the community for as long as possible.”

Two rents, and staff to support

Garneau was worrying over the impact of the shutdown just a week after it began. He told other small-business members of Cambridge Local First that the most helpful thing – after knowing when the pandemic would end, so management could plan – would be help paying rent. ImprovBoston has Barron Building office space in addition to its theater, meaning it has two landlords, one local and one corporate.

“Rent is most business owners’ single-biggest expense, and most business can’t function right now,” Garneau said at the time. “I would budget every last cent that we had to taking care of my staff, my part-time people, my artists – we pay out to, give or take, 100 people every month who are currently kind of stuck, and I would give every last cent if we knew this would be over in a month. But because we have no way of knowing when this is over, I can’t pay them – because we have to make sure we can pay our rent for as long as possible.” 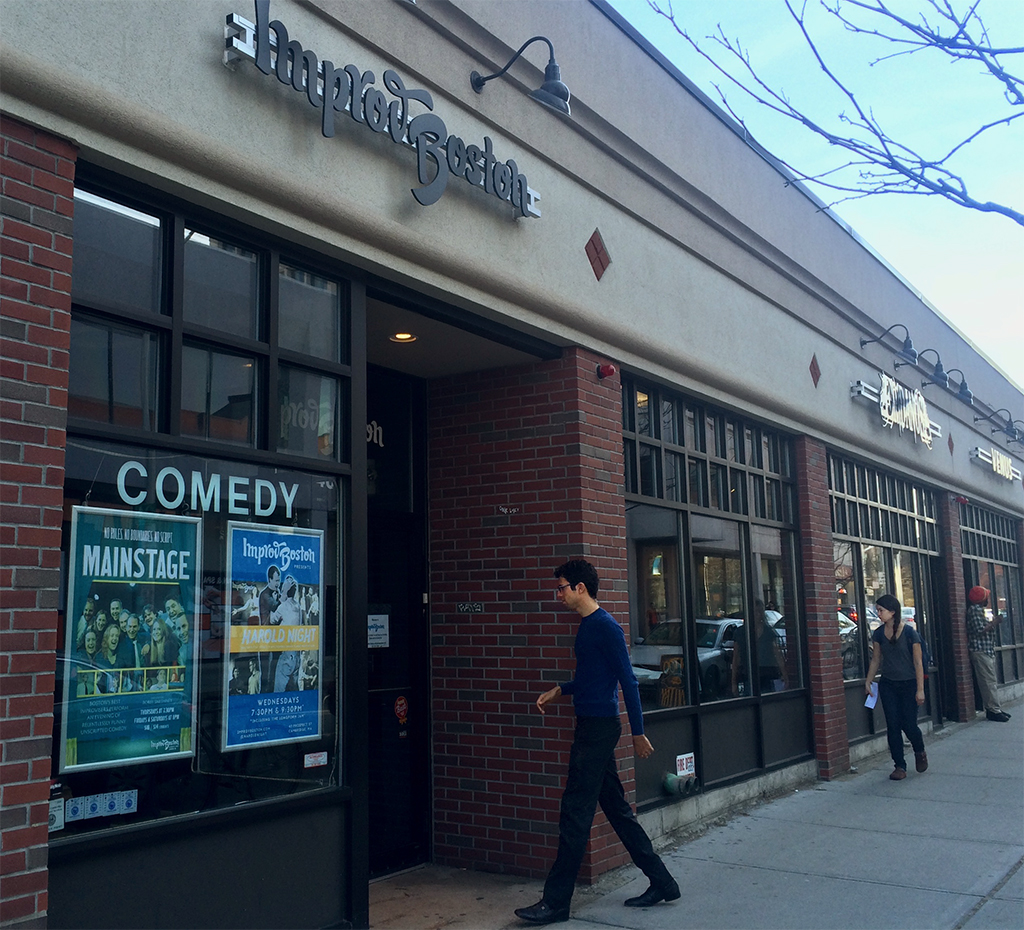 In addition to the Prospect Street theater, seen in April 2016, ImprovBoston has offices in the nearby Barron Building. (Photo: Marc Levy)

Supporting the theater’s many independent contractors is still an issue, because the government loan doesn’t cover them, he said Thursday. Online classes and streaming shows have not made up for shows that could pack in hundreds of people a night, many of whom would pause in the lobby for beers and a snack from the concession stand, and the theater has offered the content for free so far. “The thought on that was, as with many other theaters in in the immediate aftermath of the closure, we could provide a service to the world around us by providing entertainment to people who were on lockdown, we could engage our community and make sure that they continue to stay connected,” Garneau said.

There are plans to shift gears and monetize the streaming content, either through a suggested donation amount or pay-what-you-can approach, or even actual ticket sales. “We’re taking community feedback and ideas based on on what people think is valuable, as well as what we think is viable as a management team,” Garneau said.

On a good week, donations can come close to matching ticket sales in normal times, he said. But especially with community donation fatigue and a recession economy looming, it’s risky and can vary widely from one week to the next.

Michael Monestime, executive director of the Central Square Business Improvement District, wants ImprovBoston to stay put as one the square’s anchor institutions. While he has an ambitious concept to move the arts to outside performance spaces, he knows the organizations need to stay together until that can happen.

The amount of money needed monthly by ImprovBoston is big, he said, “but it’s tangible. It might require us doing a 24-hours-of-comedy telethon, like Jerry Lewis back in the day. It’s going to require work. But if we want them to stay here, which we do, which the BID is saying we do, which this community is saying we do, then we do need to put in that work to help them get that rent paid.”

Growing into its mission

The theater’s first storefront was in Inman Square space in 1990, when there was a relative handful of performers doing a mere two shows a week. It moved to a space five times the size in Central Square in 2008, and soon hundreds of people were doing 15 shows a week. As the coronavirus lockdown arrived, the theater was putting on as many as 30 shows a week with up to 150 performers, drawing perhaps 1,200 audience members – all told, bringing some 2,000 people weekly into Central Square. 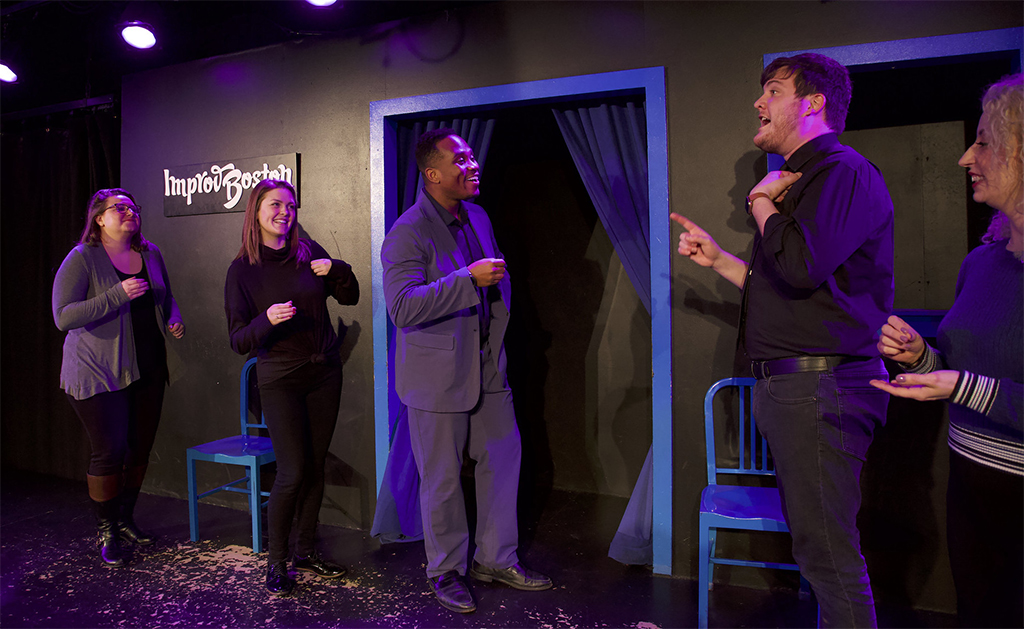 Before the coronavirus shutdown, ImprovBoston was putting on as many as 30 shows a week. (Photo: ImprovBoston)

The theater’s growth included some controversies over the years, be it over intellectual property or along #MeToo lines. But the theater was also the birthplace of the giant annual Women in Comedy Festival and smaller Comedy Arts Festival, College Comedy Festival and Geek Week events; along with traditions such as the Halloween-time Gorefests, original musicals created annually in the spirit of soaking the cast and audience in as much fake blood as possible; and the New Year’s Day 100 First Jokes shows. It’s brought names such as Maria Bamford and Kids in the Hall’s Kevin McDonald to town, and helped create stars such as Jen Kirkman.

It has offered free shows to veterans and to help heal the community after the Boston Marathon bombing in 2013 (and then renewed the offer after the manhunt for the bombers preempted them), and donated thousands to fire relief. As part of its mission, it also performs for free or discounted rates at schools, hospitals and nursing homes, and gives out free tickets to other nonprofits, as well as offering scholarships for people seeking entry to its creative opportunities and vibrant internal community. “This is a significant part of what we do and why we are a nonprofit – because we believe that the arts have a value to the people that we serve,” Garneau said.

Dana Jay Bein, a comic and comedy teacher long associated with the theater, drew attention to the crowdfunding drive on Facebook.

“The idea of raising that much money is daunting,” Bein said. “With so many causes needing help, with so much uncertainty and so much financial insecurity … it seems like an impossibility. It might be.”

Still, he urged people to donate with the hope of keeping the theater not just alive, but at home on Prospect Street.