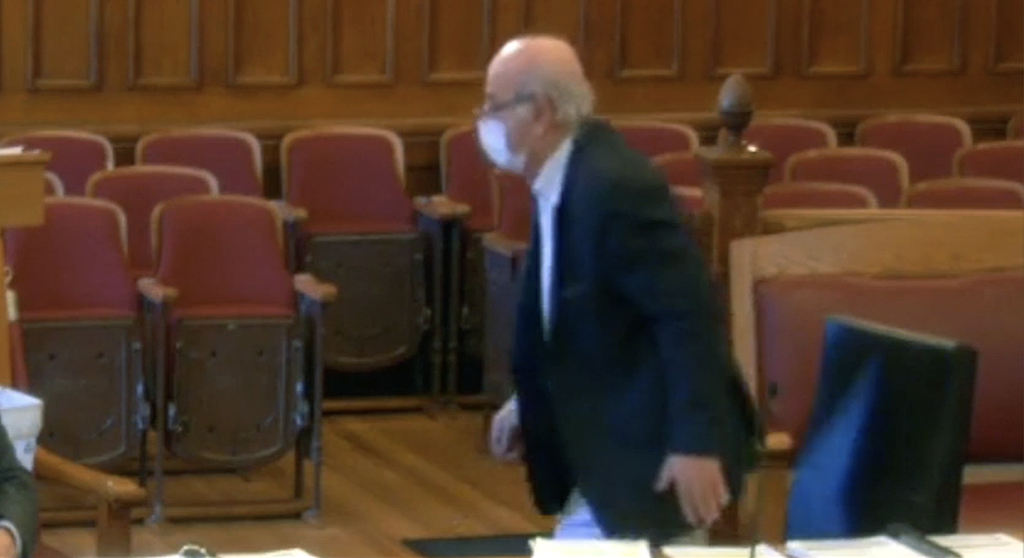 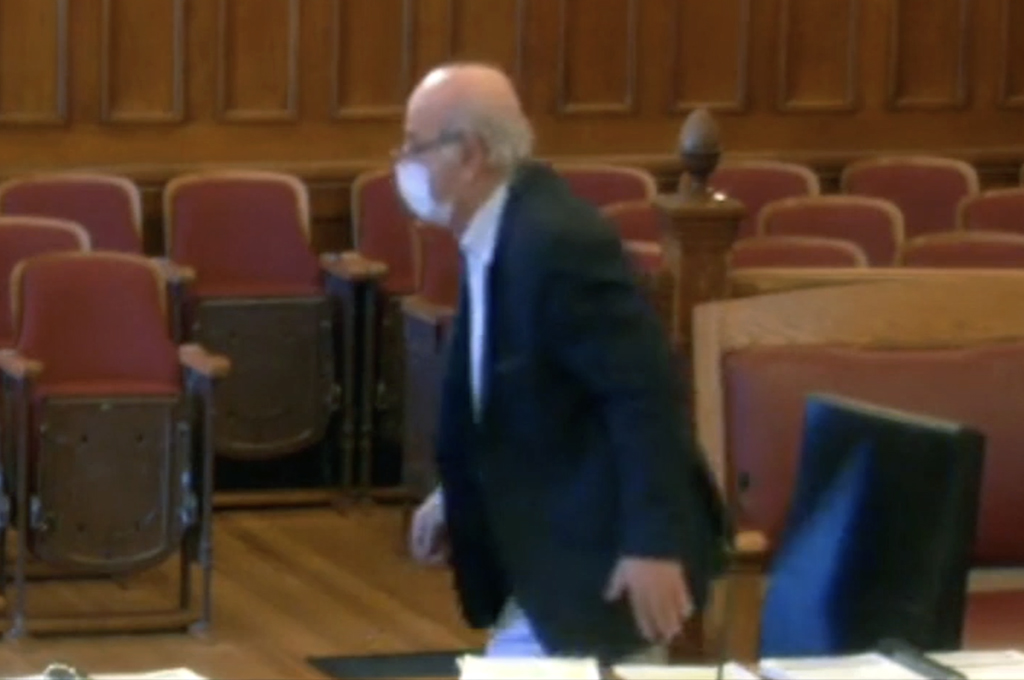 City Manager Louis A. DePasquale, seen in a video capture, walks away angrily at a Tuesday budget hearing after giving a response about municipal broadband.

Last week, Cambridge witnessed a rare show of dissent: The City Council’s Finance Committee voted to reject the city’s Information Technology budget because it failed to include money for a municipal broadband feasibility study. City Manager Louis A. DePasquale’s reaction to this was to say it was “unfair” for the council to keep talking about broadband when a consultant, whom he could not name, stated the cost would be a “billion” dollars, or $2 billion. The council, however, is relying on cost estimates provided by the city that, as far as the public record is concerned, have never been seriously questioned. To understand how the tortured path of broadband planning in Cambridge led to this turn requires a little history.

In 2014, then City Manager Richard C. Rossi convened a Broadband Task Force, of which I was member. The city also hired a consulting firm, Tilson, to do the technical work required, as well as to give its own recommendations. This consulting work was supervised by senior city officials including the city engineer, the city electrician, the director and staff of the Information Technology Department, the city’s director of communications and the city’s deputy city manager. When the consultant’s report was produced in 2016, the task force rejected the recommendations, but were given no reasons to believe the city had any doubts about the cost projection Tilson had made for the construction of a citywide broadband network. In the months after the task force presented its recommendations to DePasquale, who’d been hired as manager in the interim, those staff members were actively working on the next steps – a broadband feasibility report. In early 2017, city staff made significant progress on writing a request for proposals for the study and made representations to the City Council that it and an appropriation request would be forthcoming.

And then there was silence.

Those with long and tragically detailed memories will recall this period as more than a little bizarre. Neither the council nor the task force members could determine whether there was still a Broadband Task Force, a seemingly simple question for the city administration to answer. The council repeatedly passed policy orders about this, to which city staff repeatedly did not respond. Tired of that, the council called a committee meeting. The manager failed to appear but sent the communications director and deputy city manager in his stead. Out of this committee meeting came the City of Cambridge request, in November 2018, to conduct a one-year study of digital equity. In this request, the manager formally disbanded the Broadband Task Force, thanked members for our work and raised no questions about the content of the Tilson report. Included in the manager’s request was a promise to convene a Digital Equity Working Group to continue the work of the task force, with the estimate that its work would take 16 to 18 months. Sixteen months later, the working group has yet to be named.

Then the council went back to passing policy orders only to have them, again, ignored. Then, and only then, did it signal its extreme frustration by voting down a departmental budget.

When the pro-broadband organization Upgrade Cambridge and broadband supporters quote the cost of a city-owned network, we’re not pulling numbers out of thin air. We are using the estimates provided by the city, produced by consultants hired and supervised by city staff whose work was, as far as we’re aware, accepted by those city staffers. The consultant report shows its work, and is reasonably in line with other estimates in other cities. We are quoting an estimate that, when the deputy city manager heard it in a public meeting, said, immediately “We can do that.”

The manager has had close to four years to dispute the work of the consultants the city hired. He hasn’t done that. Instead, he responded in anger to legitimate questions raised by the council. It was unfair to him, he said, to keep talking about broadband when the cost would be a “billion-dollar investment” and a “billion-dollar operation.”

The cost estimates from the Tilson Report suggest that creating a city-owned broadband network would cost up to $187.3 million.

The costs of building a city-owned broadband network, as assessed by a consultant hired by the city.

On the other hand, when low-cost, incremental projects have been proposed, such as councillor Quinton Zondervan’s suggestion to connect the already network-wired Manning Apartments to city-owned fiber optic cables that are already in the building, the city rejected them out of hand, without any substantive discussion.

This vacuum has left the city with a single policy option for bridging the digital divide that the Covid-19 pandemic has laid bare: Subsidize Comcast’s customer acquisition costs with Cambridge taxpayer resources. By helping Comcast add residents to its Internet Essentials program, the city further enriches a company that already extracts exorbitant fees to fund stock buybacks, corporate dividends, mergers and acquisitions, and inflated executive pay. To be crystal clear, the city is suggesting rewarding the corporate entity whose pricing structure created and maintained a digital divide by providing new customers who’ll get second-rate broadband, a service that, as the communications director told the council, has only recently been upgraded so that it now technically qualifies as broadband. Cambridge must do better than line corporate coffers to provide poor service to poor people. And, while it’s hardly going to matter to the city, this not only rejects the Broadband Task Force recommendations, but one of the goals offered by Rossi when he formed it: to increase competition.

Here is video of DePasquale’s response last week to being challenged over broadband:

The manager followed up his angry outburst to explain that all he wanted was a committee meeting where he could present this information, and he said that it hadn’t yet happened because of Covid-19. Let’s be clear about this, too. The City Council has, for almost four years, been all but begging for that meeting. Upgrade Cambridge has, itself, spent significant energy trying to motivate the manager to respond to the task force. The only person the manager has to blame for not presenting this information is himself. To blame the pandemic is to erase the years of inaction that has left our neighbors stranded as the world pivoted online.

The manager obviously cares about the city’s budget and budget presentation, and having a part of it rejected clearly stung. One can understand a flare of anger from his wounded pride. But the substance of his response raises serious questions. Does he truly believe that, because he was told something by an unnamed consultant – something that he failed to share with the council or the public – debate should end? How did he expect the council to know what he says he knows? Does he not recognize that he’s stonewalled all substantive discussion? Does he not know that broadband activism has been premised on cost estimates his own city staff stood behind and from encouragement by that same staff?

The manager’s contract expires this year, and he has already requested an extension – something that seems a foregone conclusion. Before this, activists have pointed out the disrespect the manager was showing the council and the public by stonewalling. But his answers to the council regarding broadband can no longer be called just stonewalling. Rather than seeking a collaborative solution in a matter of sustained deep public interest, he’s blaming those of us who keep insisting on action for keeping the issue alive. He’s blaming the council for, well, doing its job. And he seems incapable of the self-reflection required to understand his central role in how we got there. No city councillor can responsibly vote for the manager’s contract renewal unless and until he explains himself and takes responsibility for his actions. This is not how Cambridge should be governed.