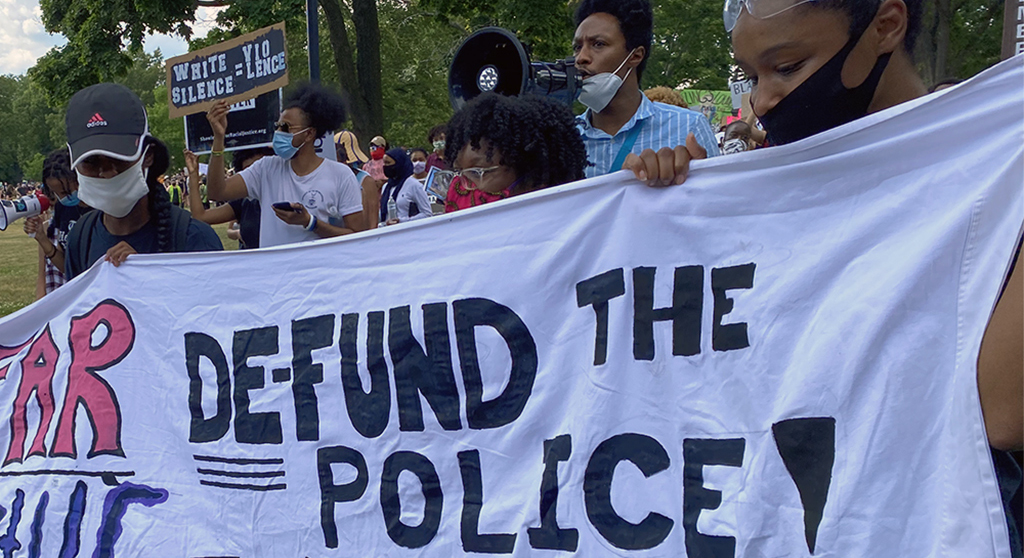 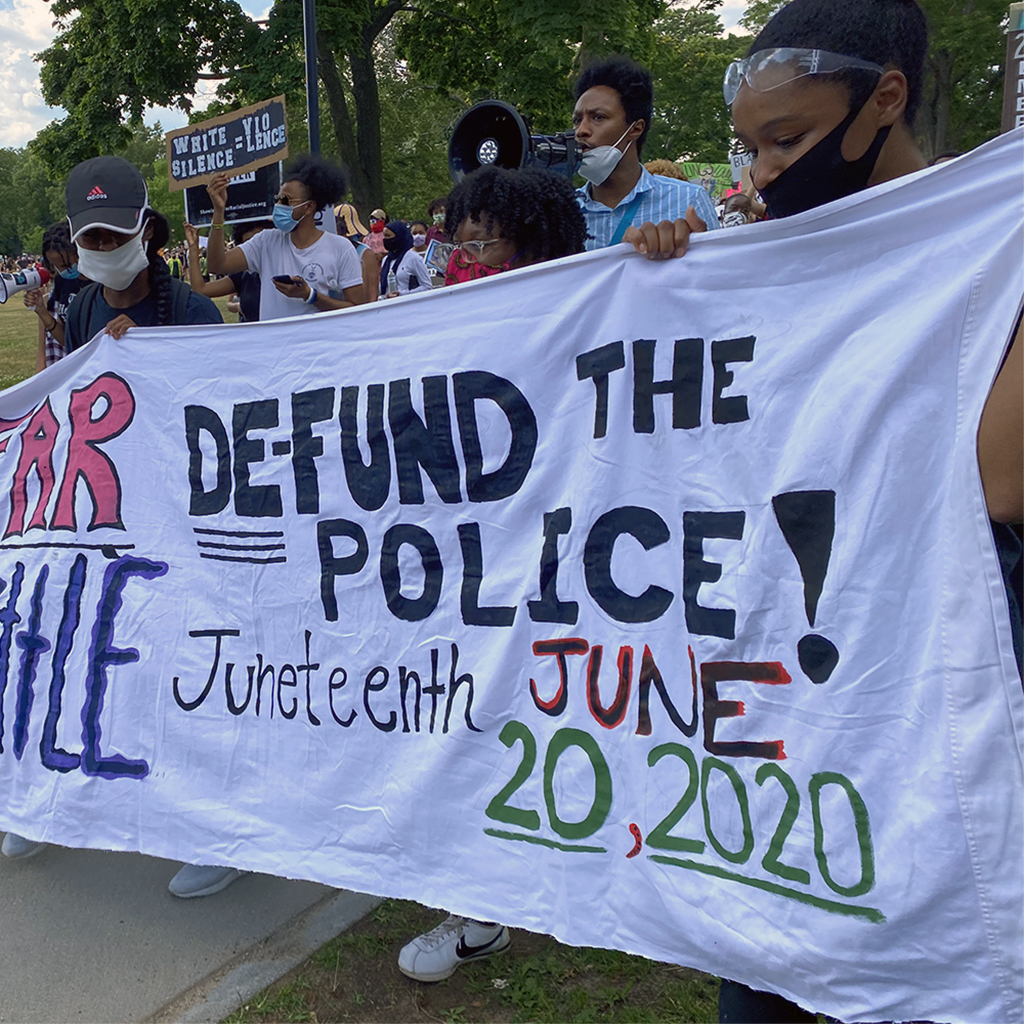 Defunding police departments was a prominent theme at a Saturday march that drew 2,000 in Cambridge. (Photo: Marc Levy)

An attempt to see if Cambridge police commissioner Branville G. Bard Jr. was being truthful in saying his department had no “military equipment” was shut down temporarily Monday by a city councillor saying she wanted to instead “review and address any systemic racism blind spots throughout our entire municipal government.”

“We cannot look at one department of the city without examining the entire municipal body. We would get an incomplete picture, a distorted assessment, and it would be a pointless endeavor,” E. Denise Simmons said, using her “charter right” to end the week’s discussion on an order to see an existing list of police department equipment.

Police killings of people of color have sparked a protest movement nationwide and in Cambridge in recent weeks, most recently drawing 2,000 people to a Saturday march and as many as 70 people, by police estimates, who marched to City Hall again Monday, blocking traffic as the council meeting got underway. A major theme has been to defund police departments, which answer civil issues with military-grade equipment. 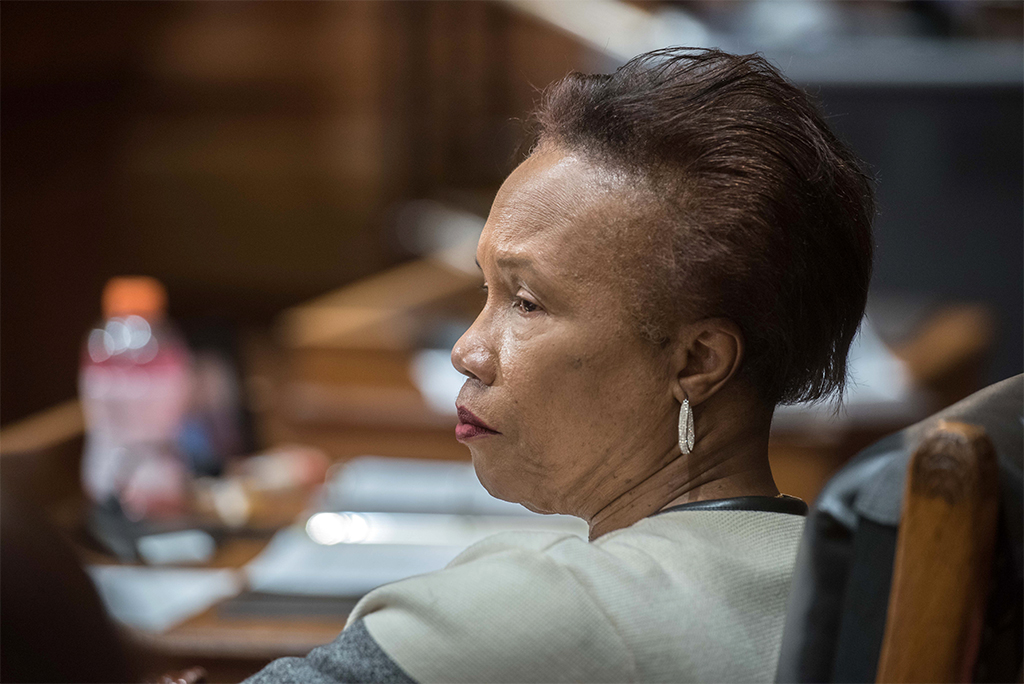 At the tail end of a city budget process hampered by coronavirus, councillors Jivan Sobrinho-Wheeler and Quinton Zondervan called June 10 for a $4.1 million police department increase to be redirected to human services hiring; Simmons had a strong reaction, decrying that the order had moved forward without her even though she agreed with the overall intent and saying the problems of racism and bias were systemwide, including within “the City Council office.” The next week, councillors came to a $2.5 million compromise.

But during his testimony opposing the loss of his funding, Bard argued that there is an incorrect perception of a militarized police department, though it is one shared as recently as 2015 by past councillors learning of its sniper teams, bomb squads and armored vehicles. Councillors at the time referred to it as the “militarization” of police.

“We don’t get military equipment. We don’t have any – at all,” Bard told the council June 10. “We don’t have tanks, we don’t have anything like that.” (The department has a vehicle called a BearCat, which is described by a police spokesman as a “rescue vehicle.” The maker, Lenco, describes the BearCat as having all-steel armor construction that offers “high ballistic protection.”)

That upset Zondervan, who responded with a policy order saying that, since city law already orders an annual accounting of department property that is due in July, councillors should see the list as well. “He mentioned that the police does not own any military equipment, and I watched the armored vehicle owned by the police roll past my house,” Zondervan said. “We can of course quibble about whether an armored vehicle is military equipment or just military-grade equipment, but in any case we should have a full accounting of all the equipment that is owned by the police.”

With a list, councillors could “have a conversation with the commissioner about what equipment we really need and for what purpose,” Zondervan said.

It wouldn’t be the first time a police commissioner came to the council with questionable claims about department gear. In 2014, then commissioner Robert C. Haas asked city councillors for nearly $485,000 to beef up the city’s bomb squad with five more officers and five bomb-sniffing dogs. Haas told the council that Boston police had expressed urgency for help after the Boston Marathon bombing. “They wanted to step up that program and have these assets in place by the next marathon,” Haas said.

The Boston Police Department’s Bureau of Public Information denied any “signal” of urgency around a bomb squad had been sent to Cambridge.

Simmons, while acknowledging police are unique among Cambridge departments and must be scrutinized to ensure they don’t act “in any sort of nefarious way,” charter righted Zondervan’s order because “we cannot talk about the Cambridge police as if they exist in a vacuum.”

The response didn’t go over well with at least one politics watcher.

Resident Christopher Schmidt, who has been active in Black Lives Matter and police defunding protests, said he was shocked that Simmons would object to requesting a list that is already required by law.

“This isn’t about ‘systemic racism’; this is just about transparency and good governance,” Schmidt said online. “This is about providing potentially misleading statements to the council, with a need to clarify exactly what is meant when the police department claims that they don’t have these items.”