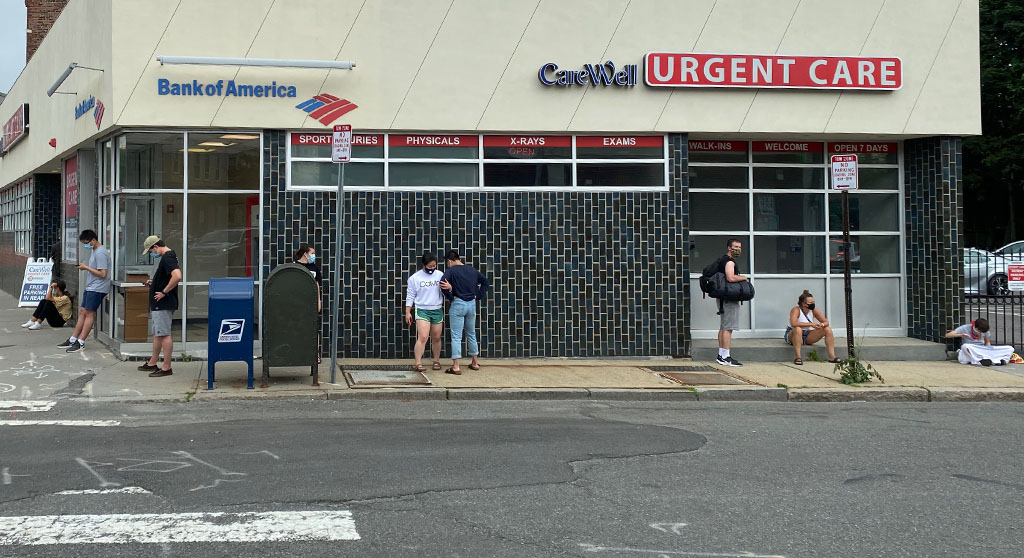 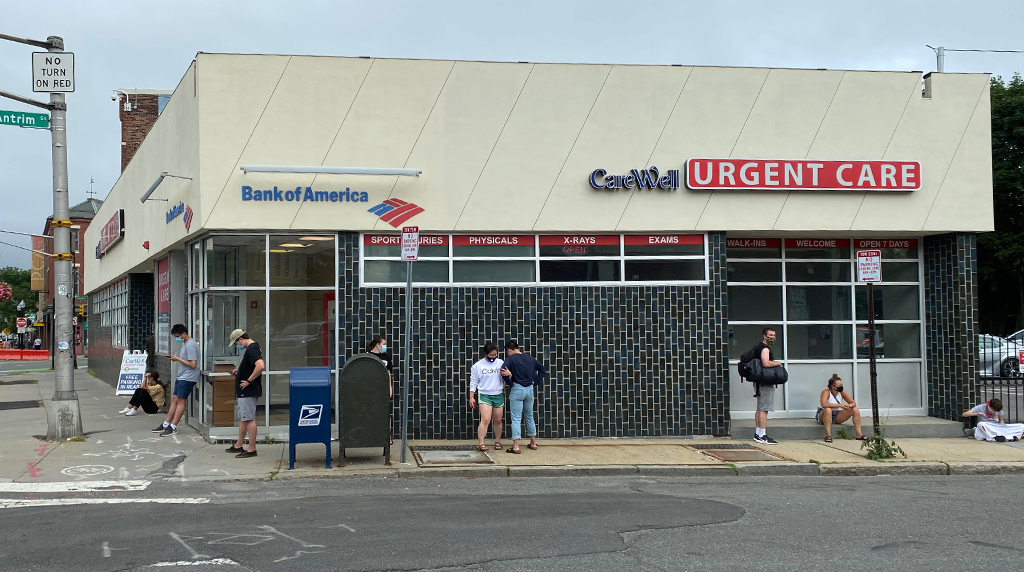 People have lined up for days throughout early July for coronavirus tests administered by the CareWell health clinic in Inman Square. (Photo: Marc Levy)

Less than three weeks ago the Cambridge Health Alliance ended free Covid-19 testing on Gore Street in East Cambridge because of dwindling demand, and the city invited residents to get tested for free this month at sites rotating among neighborhoods. This week the situation stuttered between stop and go: On Wednesday there were no more July appointments because of unexpectedly high demand, the city said, and on Thursday it had scheduled three additional Saturdays of testing.

The new dates are July 18, July 25 and Aug. 1 from 11 a.m. to 7 p.m. at the Pisani Center in The Port, with no information yet on how to get an appointment. Before the testing program was resurrected, maybe temporarily, it appeared the city had reached the end for Cambridge-sponsored free Covid-19 testing despite its coronavirus website asking for “patience and understanding as we work to meet this high demand.” The website directed test-seekers to call their doctor and discuss symptoms or visit state websites that also help people evaluate if they have signs of illness that require testing. The city didn’t say so, but the state also offers free tests in eight communities with high rates of infection, including nearby Everett and Chelsea; people don’t have to have symptoms or live in those communities, although residents there are urged to get tested.

The Gore Street site and the neighborhood programs didn’t require people to have symptoms or talk to their doctor. Research shows many people with Covid-19 have no symptoms or test positive before having signs of illness.

Cambridge Public Health Department spokeswoman Susan Feinberg didn’t respond to questions about how many appointments the city had booked before it prematurely announced the end, and why July saw such a turnaround in demand. There were some hints on social media that it involved summer travel: Some states require proof of negative test results if Massachusetts residents want to avoid quarantining for two weeks after entering.

Several urgent care chains offer Covid-19 tests, including one, CareWell, that advertises a new antigen test with results in 15 minutes. People on line outside CareWell in Inman Square on Friday said they were not seeking a test for travel, though; they just wanted to be tested. Antigen tests look for proteins from the virus and can reliably detect if someone is infected, but false negative results are more common than with the most widely used diagnostic test, PCR. Some doctors and public health officials recommend that people with a negative antigen test get a PCR test to confirm it.

CareWell charges $160 for an antigen or PCR test unless a person has symptoms or is a health care worker, the company says on its website. People can seek reimbursement by their insurer, the website says.

Cambridge has one of the highest testing rates – by number of tests per 100,000 population – in the state, according to the Massachusetts Department of Public Health. In addition, as testing in Cambridge has increased steadily, the percentage of people who tested positive has dropped; it was less than 1 percent as of Wednesday. That’s a sign that enough people are getting tested to control the spread of the virus, public health officials say.

Cambridge was also one of the first communities to offer testing to people without symptoms. In April, the city’s Public Health Department responded to an offer by the Broad Institute of Harvard University and Massachusetts Institute of Technology to test every resident and worker at the city’s three nursing homes and four assisted living centers.

The results surprised the department – 169 residents and 34 workers tested positive, many without symptoms. Previously Cambridge knew of only 24 cases. The Broad Institute, which developed a fast way to analyze samples, went on to do two more rounds of testing at long-term care facilities and collaborate with the city to test senior public housing residents and people living in “hot spot” neighborhoods. The institute is also testing at nursing homes and assisted living sites statewide.