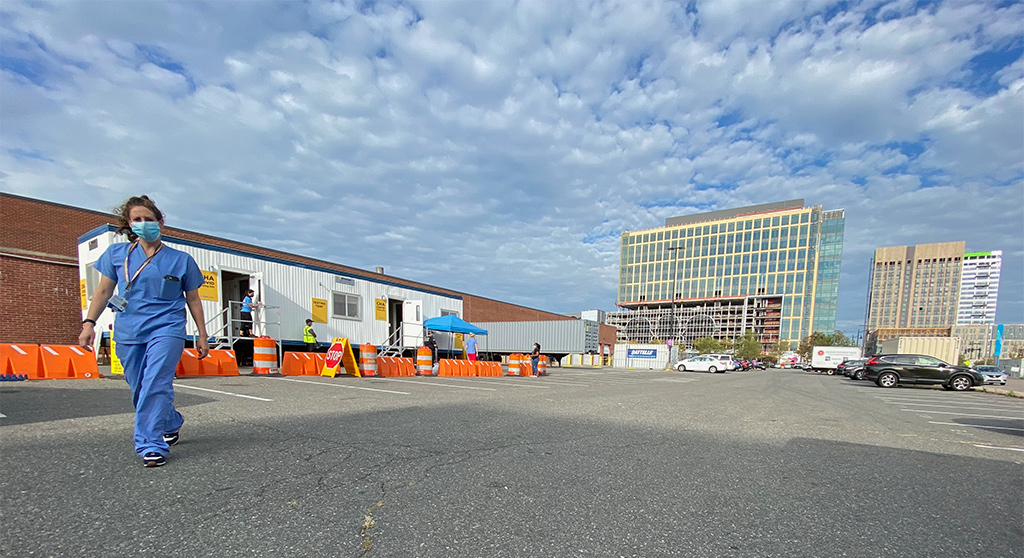 The city will hugely expand its free Covid-19 testing program for viral tests to show if you have a current infection, moving to seven days a week from two and doubling the number of locations to four, including a drive-through option at the CambridgeSide mall that opens Sunday. The announcement came Friday, a day the public health department reported 16 new cases of coronavirus – the biggest daily jump since the spring surge.

Besides the new drive-through location on the upper level of the CambridgeSide parking garage on First Street in East Cambridge, tests will be offered at the former Fire + Ice restaurant on Church Street in Harvard Square. The current test sites – the St. John the Evangelist Church on Massachusetts Avenue in North Cambridge, and the Pisani Center on Washington Street in The Port – will continue to operate. The complete schedule is available at cambridgema.gov/covid19/Testing. The Cambridge Health Alliance has a testing location in Somerville’s Assembly Square open to its patients and community members.

The testing structure will also be used for flu shots and, eventually, for Covid-19 vaccinations, city officials said. The city has created a Cambridge Pandemic Collaborative that includes the organizations and companies providing space, services and personnel to provide Covid-19 tests, such as the Broad Institute of Harvard University and Massachusetts Institute of Technology, ProEMS, the fire department, Trinity Property Management, CambridgeSide, the Cambridge Housing Authority and St. John the Evangelist Church. Mount Auburn Hospital is also a member.

As of that day, the city had performed 16,478 free tests since the spring, said Kristin Ward, performance management and quality improvement specialist for the city health department. Demand was lower than expected as cases abated in late spring, but it has skyrocketed in the past few months. Residents complained that appointment slots filled up a few hours after the city posted them online.

But people in the know could get a test without an appointment, it emerged in discussions on social media and the neighborhood online site NextDoor. That brought criticism from vice mayor Alanna Mallon, who asked why the city didn’t disclose this option and said that not revealing it “kind of keeps it to an elite group of people.”

The number of walkups may be substantial. Mayor Sumbul Siddiqui said in an Oct. 23 podcast she had been told by chief public health officer Claude Jacob that there were 200 appointment slots at a Wednesday testing session at the North Cambridge church last month, and 500 people showed up.

“It is our policy not to turn anyone away when there is capacity to test,” Ward said, but “we strongly encourage anyone seeking a test to make an appointment in advance [to] ensure safety of residents, properly allocate resources, including personnel and keep wait times as short as possible.”

The city has also said free testing is limited to people who live or work here, including city employees. But no one has to provide identification, and the online appointment system includes options to identify as a Cambridge resident, worker or “none of the above.”

The city has also revamped its online appointment site, which was criticized as confusing and cumbersome. Appointment slots are now available through the end of November and can be organized by site and date.

The new system also explains that people can get results faster if they opt to get them by email instead of by phone. Results can come as quickly as within 24 hours by email, while telephone notification can take up to three days.