Rodney’s closes in Central Square and for winter before seeking new home; A bank may replace it 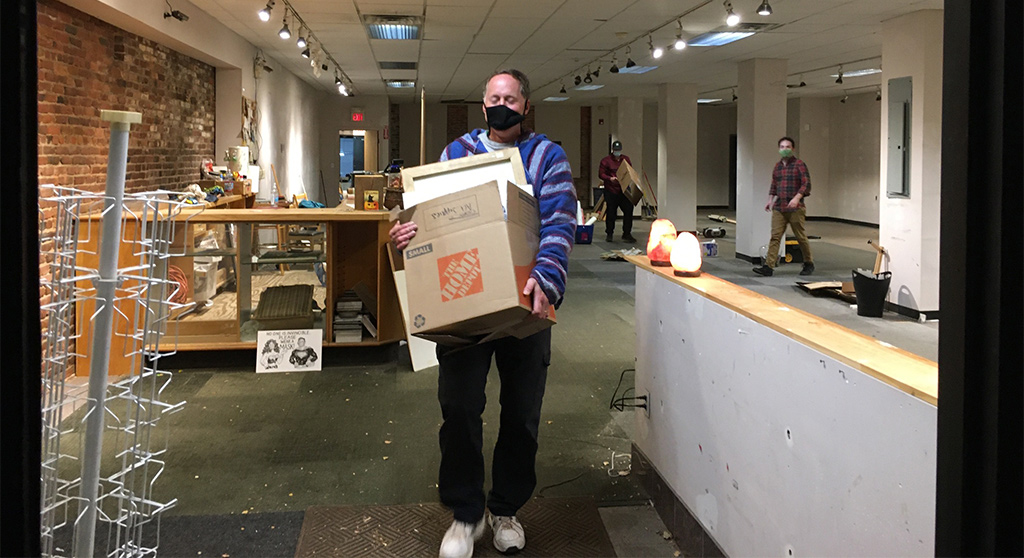 Rodney’s closes in Central Square and for winter before seeking new home; A bank may replace it

Herb Taylor removes one of the final boxes of stock Saturday from Rodney’s Bookstore in Central Square. (Photo: Shaw Taylor)

Rodney’s Bookstore has closed in Central Square, with its wares stored in anticipation of a spring opening in a new location, owner Shaw Taylor said Monday.

The bookstore was at 698 Massachusetts Ave. for 21 years, and operated without a lease for the past decade on a friendly basis with landlord Michael Simon of Central Property Management, Taylor said. He’s planned the closing since January, when news of a new tenant arrived, and said goodbye to the space early Sunday.

“With the way that Covid is and just the way things are with me, I’m probably not going to open a store this winter,” said Taylor, referring to what would be tiring commute from his home in Cape Cod to get a new store running. “It just makes sense because there’ll be more storefronts available then – unless I find something perfect.”

In the meantime, the books will stay in storage in a Cambridge garage, he said.

A sign posted at the store in August signaled the closing, but Taylor reassured customers that he intended to find new space – ideally in Cambridge, though he know it would be tough to match his current location, with its large windows looking in at roughly 4,000 square feet near a T stop. (Rodney’s also had second-floor space for about eight years, Taylor said, but even after letting go of it the store retained some 45,000 volumes along with posters, pine shelving, “Russian pins” and other bric-a-brac. “It all goes together. I’ll have six people come in and only three of them are interested in books, but there’s plenty for the other three to check out whether it’s a bowling pin or all the prints and posters that we sell,” Taylor said.

“To see bookstores close at all is heartbreaking. To see one close in Central Square is even more so,” said Michael Monestime, executive director of the Central Square Business Improvement District.

The next occupant of the Rodney’s space is expected to be a Citizens Bank branch, swapping from the handsome Savings Bank Building across the street at 689 Massachusetts Ave. Even with the bookstore gone, it’s unclear when a move would take place; after long-standing frustration with financial institutions dominating long stretches of streetscape and depressing community interaction, zoning was passed in 2017 that limits the amount of storefront allowed to a bank. No more 25 than feet of building frontage facing Massachusetts Avenue is allowed by right in the Central Square Overlay District.

“They’ll need to go in front of the [Board of Zoning Appeal] and get a variance,” Monestime said. “The zoning means they have to do some work before they can simply jump across the street.”

It’s not known what would replace Citizens Bank in the Savings Bank Building, built in the beaux-arts style in 1904 and owned by the Unitarian Universalist Service Committee and its College of Social Justice, which is also in the building.