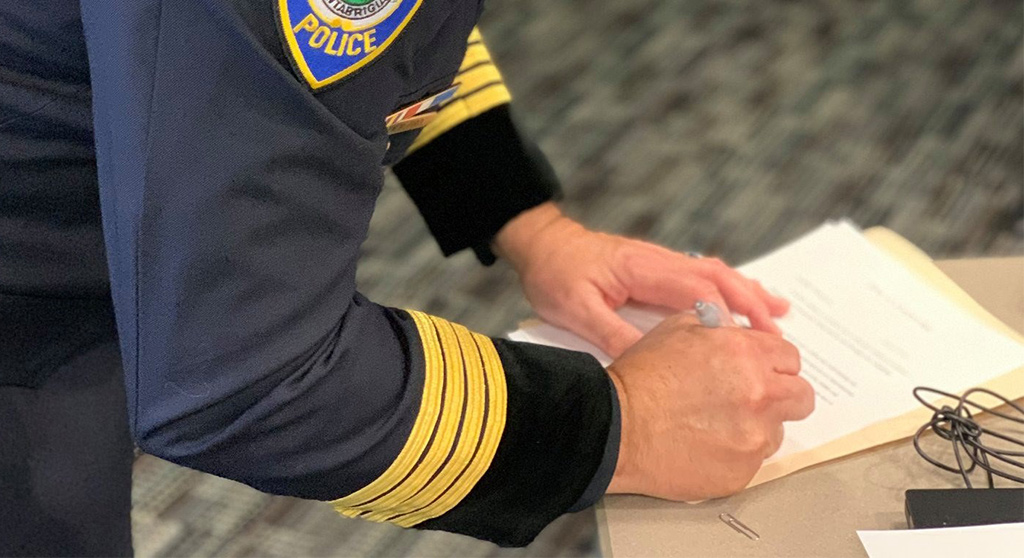 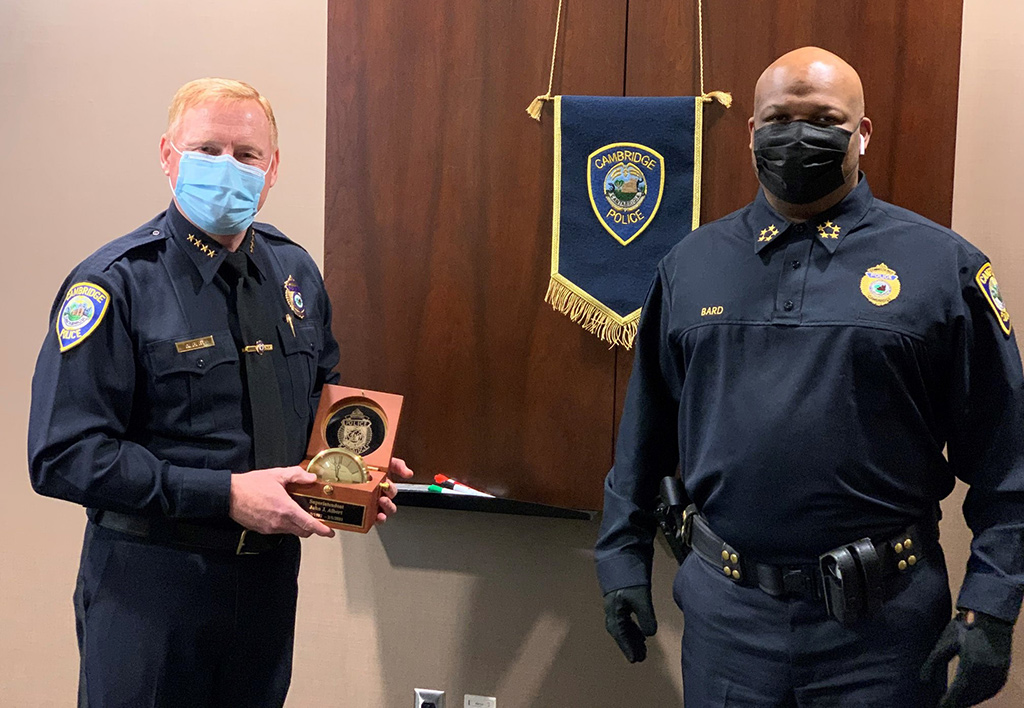 A longtime police superintendent retires Monday, his final year tarnished by a political tweet in a time of extreme political sensitivity.

Jack Albert will be replaced by Leonard DiPietro, who was promoted to the rank of police superintendent at a swearing-in ceremony Friday. DiPietro will take over Albert’s oversight of the Cambridge Police Department’s operations division.

Albert was raised in Cambridge and joined its police department in 1987, serving in several units over the decades including patrol operations, community services, traffic enforcement and investigations. Before his promotion to superintendent in August 2019 to run operations, he served as deputy superintendent for day operations. 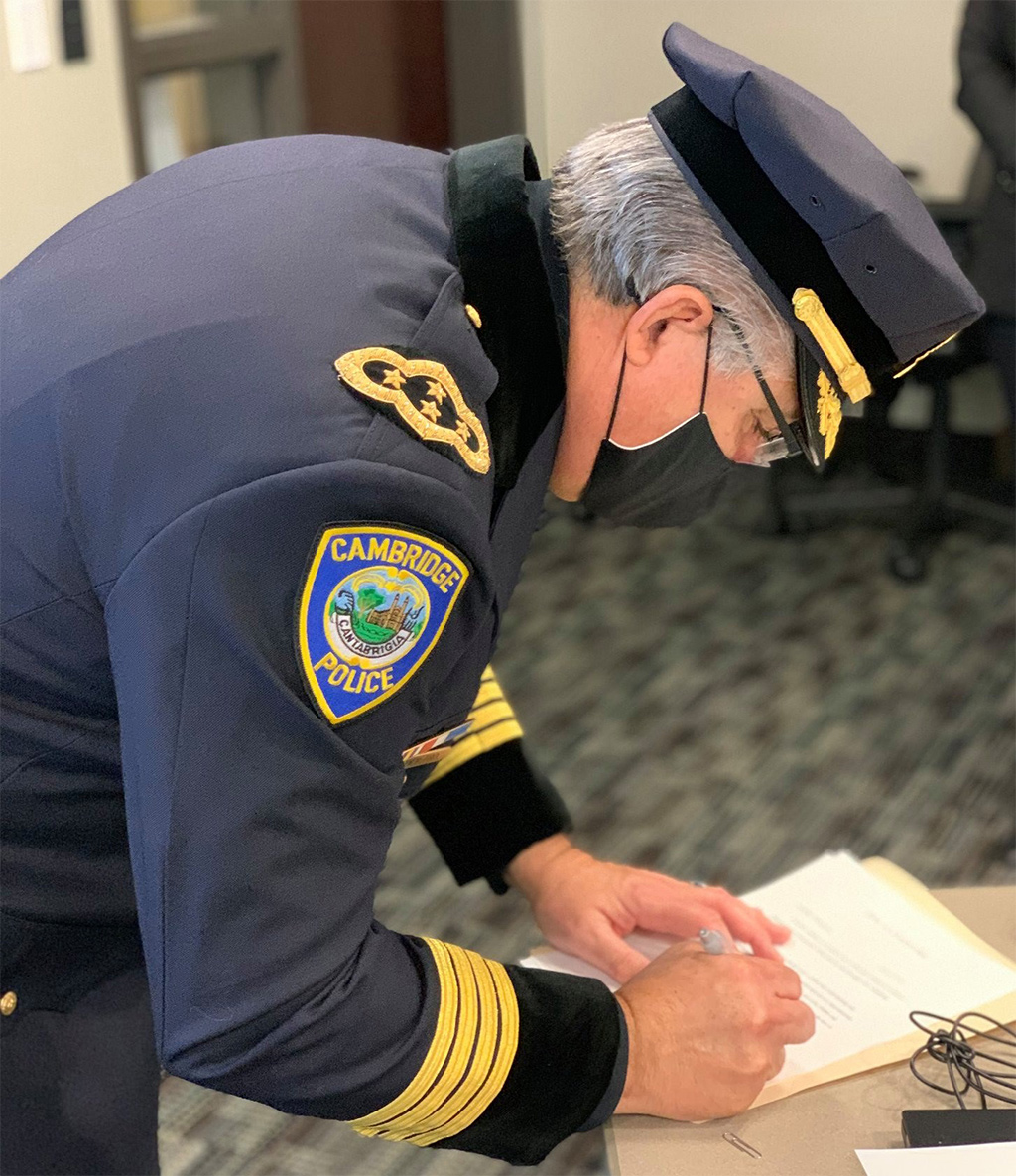 “Superintendent Albert has made significant contributions to the department over his more than 30 years with the city and tenure as the longest-serving deputy superintendent. I have been greatly impressed with his admirable leadership qualities, high level of service and results, and the respect he has garnered within the department and community,” Branville G. Bard Jr. said at the time. “I am confident that these qualities will continue to advance our mission and values and collaborative efforts with both city and community partners.”

Unfortunately, the affable Albert made a misstep May 3.

That’s when he accidentally used the department’s official Twitter account in an online conversation to bash then U.S. Rep. Joe Kennedy III as “another liberal fucking jerk.” The tweet was deleted quickly, and Albert apologized via Twitter the next afternoon, calling the commentary a “lapse in judgment … out of character and not something I am proud of.” A police spokesman said he was subject to disciplinary action, but that the department was restricted from identifying the punishment. That turned out to be the case even with city councillors whose attention had been drawn by the tweet.

A handful of residents urged councillors to “consider the entire person” and not to judge Albert “based on one mistake.” Albert had taken steps to make up for his error, said Paul Toner, a former president of the Massachusetts Teachers Association and one-time council candidate. Albert called Kennedy and U.S. Rep. Edward Markey – also a topic of the tweet – immediately to apologize, and he believed they accepted, Toner said.

Incidents in a political time

In the months that followed, which were dominated by Black Lives Matter protests, talks of redirecting police funding toward social services and questions about military-grade police equipment, there were other politically provocative actions by Cambridge officers: The Cambridge Police Patrol Officers Association tweeted in July about a reform bill that “If you think seven civilians killed in seven days in Boston is bad, just wait for the purge that will come,” then deleted it; in August the city heard of an encounter with an officer improperly masked for avoiding the spread of coronavirus in Central Square who was defended by a dispatcher reportedly saying it was allowed because “we don’t live in a Communist country yet”; and in September department officials said they were investigating social media posts by a Cambridge Police Department lieutenant that were “deeply disturbing” in their praise of political violence.

In each case, the actions raised questions about the degree to which officers were hostile to beliefs mainstream in one of the most notoriously liberal cities in the United States.

“It is imperative that the community can rely upon and have the utmost confidence in the commitment of all Cambridge Police Department officers to provide the highest level of public safety services to all … regardless of race or political affiliation,” police said in a September statement about the final incident. “Statements such as those alleged to have been made violate the public trust that the department has rigorously taken pride in building, which can cause immeasurable damage to that trust, and they will not be tolerated.”

Joined as a cadet

DiPietro, born and raised in Cambridge, joined the department as a cadet in 1976. He became a police officer in 1983 after spending time with the Cambridge Fire Department, according to a department biography, and since joining the police department has served in units including patrol operations, community services and criminal investigations. Most recently, he served as deputy superintendent for criminal investigations and before that, made “significant impacts” in what’s now called the Family and Social Justice Section and was instrumental in creating the city’s Safety Net Collaborative. DiPietro was promoted to lieutenant in 2007 and deputy superintendent in 2017.

“Superintendent DiPietro has been a great leader for the department and has a wealth of experience and institutional knowledge. He will bring these important attributes to the operations division and will be an integral part of leading our department forward as we collaboratively work to be the best possible servants for our community,” Bard said in a press release.

City Manager Louis A. DePasquale said DiPietro’s leadership “will be an asset to the department and the city.”

“Having a first-rate, nationally recognized police force does not just happen. It happens because the Cambridge Police Department has strong leadership and high-quality men and women in the department,” DePasquale said.

Superintendent Christine Elow will keep running the Support Services Division, police said, similar to the personnel choice made at the time of Albert’s promotion in 2019.

Albert’s retirement after more than three decades with the city is one of a few. On Monday the council has resolutions acknowledge officially the retirement of deputy city manager Lisa Peterson after 31 years in City Hall (the city still has not, including word on whether Peterson’s position will be filled), Community Development Department mainstay Liza Paden – she’d been with the department a little over 36 years – and Cambridge Community Television executive director Susan Fleischmann, who’d been with CCTV for some 33 years.