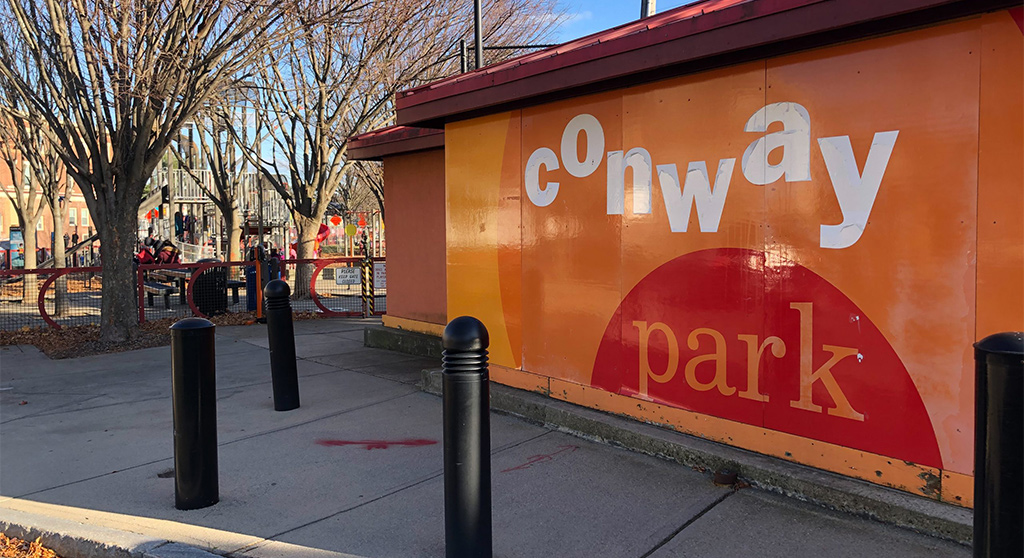 By Samantha Herrmann and Stefania Lugli 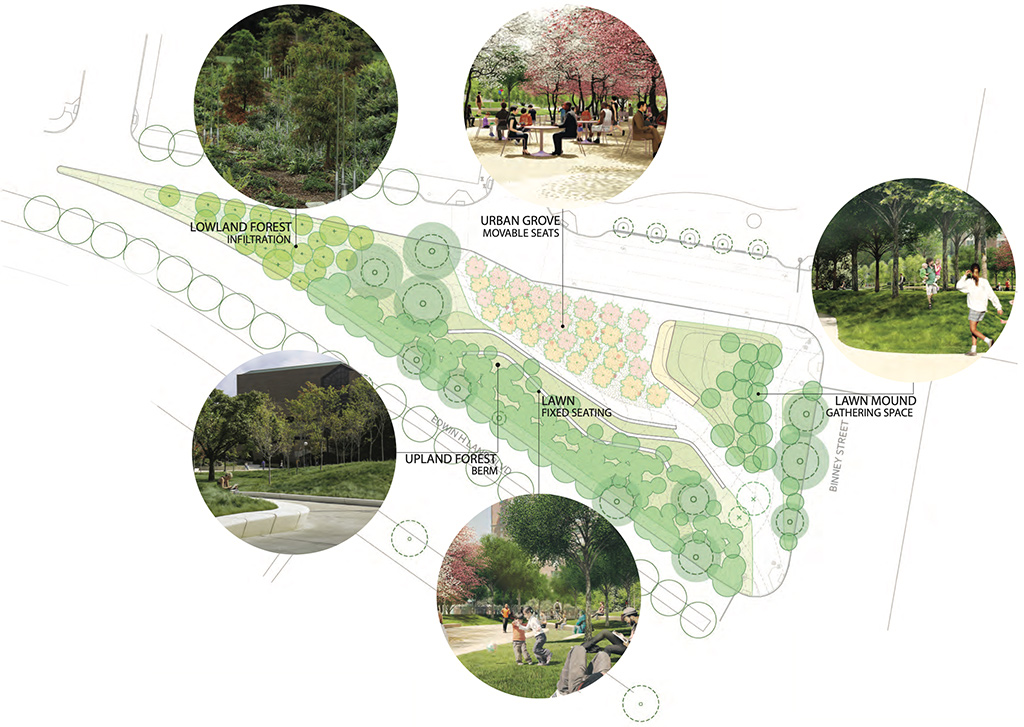 As Cambridge set aside $5.7 million last week to design and build three parks, a city councillor and staff clashed briefly over whether the expense was necessary compared with what parks cost in neighboring communities such as Somerville.

The expenditure wasn’t even the whole story, councillor Patty Nolan said Feb. 3, because Timothy J. Toomey Jr. Park, Triangle Park and Binney Street Park, all in the East Cambridge and Kendall Square areas, are together estimated to ultimately cost $17.2 million, or an average $5.7 million each. “As far as I know, none of them are even an EPA remediated site. The closest comparison I could find in reviewing some nearby new parks is Conway Park in Somerville [which] includes a substantial amount of EPA remediation,” she said, referring to the Environmental Protection Agency. “I just reviewed a whole bunch of other parks and none of them come anywhere near this average cost.”

Cambridge costs were double any park of equal size, Nolan said, though people “in those areas say they’re just as high in quality as ours.”

While city engineer Kathy Watkins explained costs in terms of items such as new irrigation, lighting and drainage systems, all going through comprehensive community design processes, City Manager Louis A. DePasquale spoke to the councillor’s concerns that Cambridge was being charged more per project simply because it was known it could pay. 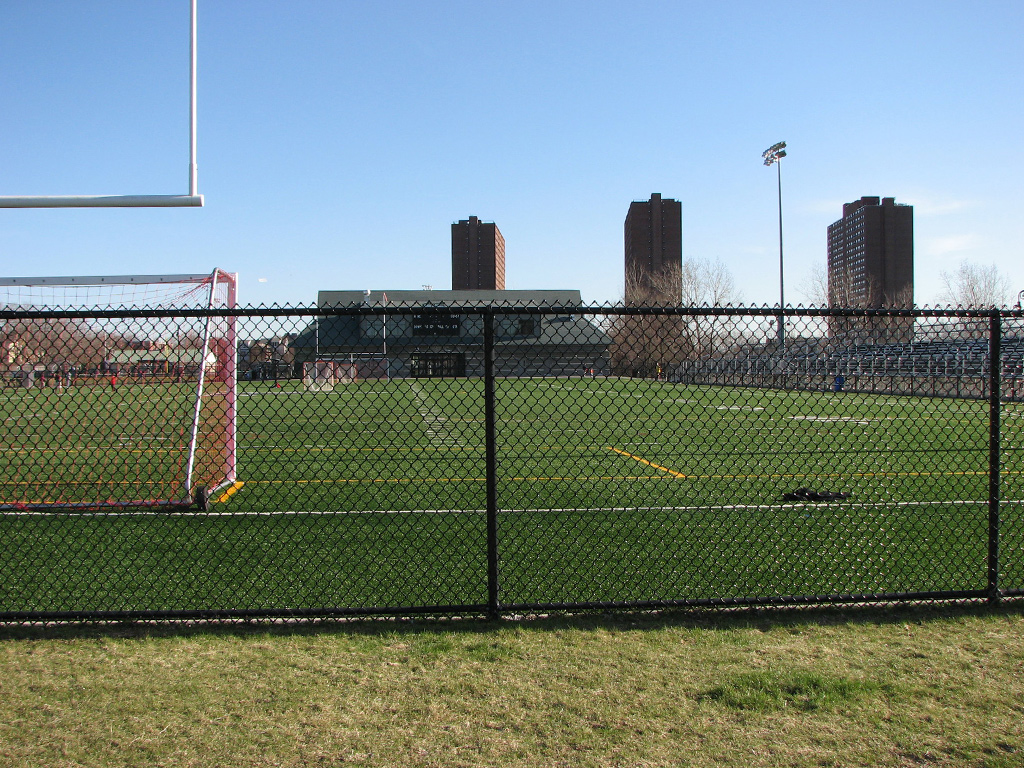 Another difference between Cambridge and Somerville that went unmentioned, including for that city’s Conway Park: artificial turf.

When councillors concerned about the health risks of artificial turf called Oct. 21, 2019, for a review of city policies and procedures around its purchase, installation and disposal, it become just another order the city has ignored, relegating it to the “awaiting reports” list for every agenda since. But the Cambridge Public Health Department had made an artificial turf risk assessment in February 2015 and “found no unusual risk of adverse health effects” for older children; and while the Department of Public Works said it would continue to consider alternatives, commissioner Owen O’Riordan also said Wednesday by email that the last artificial turf project in Cambridge was Russell Field in 2017 – which had a newer synthetic turf meant to answer some health concerns. (A report that year found four at Danehy Park and one each at Russell Field and at the Haggerty, Graham & Parks and Dr. Martin Luther King Jr. schools.) There are no existing plans to add another sports field, O’Riordan said.

“There have been a number of discussions between DPW, Public Health and [the Law Department] about the issue of how best to think about sports fields [but because] there are no additional fields on the horizon being considered for artificial turf, the topic has not advanced,” O’Riordan said. Coronavirus has been the priority for the city’s health department, he noted. 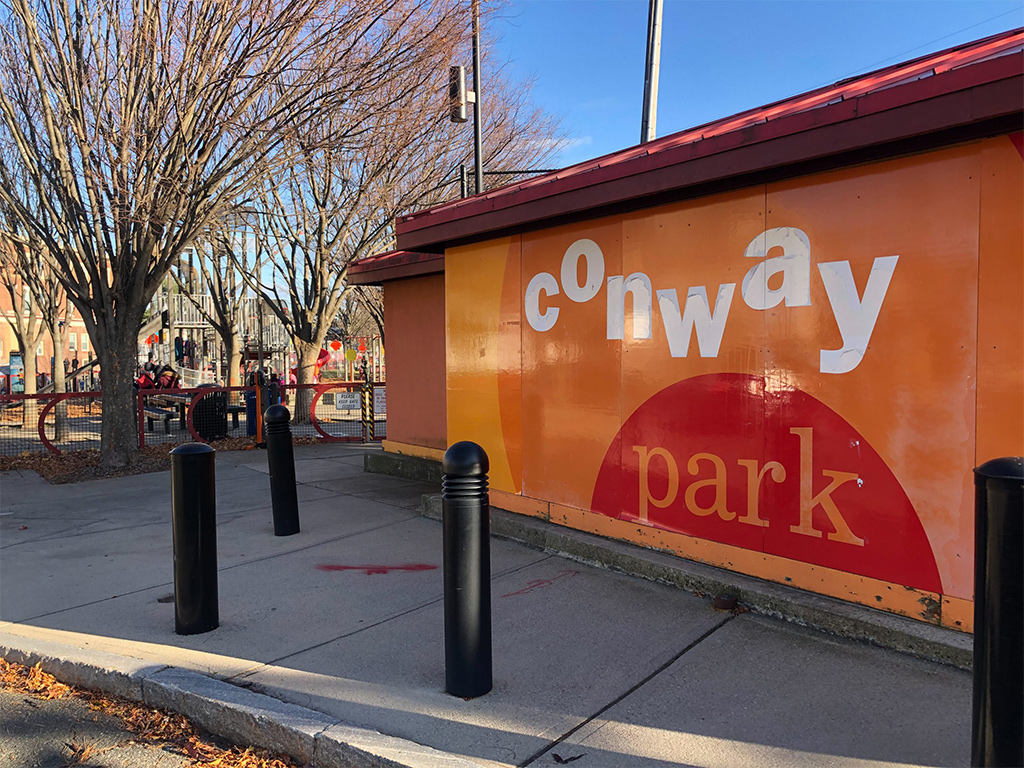 Conway Park is a once-inviting playground and green space to which the city restricted access – to a baseball field and a portion of the playground – after a 2017 environmental site assessment found chemicals had seeped into the soil. Historical maps confirm that parts of the land used were occupied by bleachery and dye works companies.

Somerville plans to unearth 18 inches of soil, stretch a fabric tarp over the ground and cover it with artificial turf. In October, the city approved a budget of more than $9 million for the project, a third of that total granted by the EPA for site cleanup to “eliminate the direct contact threat and remove the source contamination by excavating and disposing of soils contaminated with [chemicals] and lead, and potentially other hazardous substances.” The remaining funds are earmarked for further environmental remediation, LED sport lights and the artificial turf. 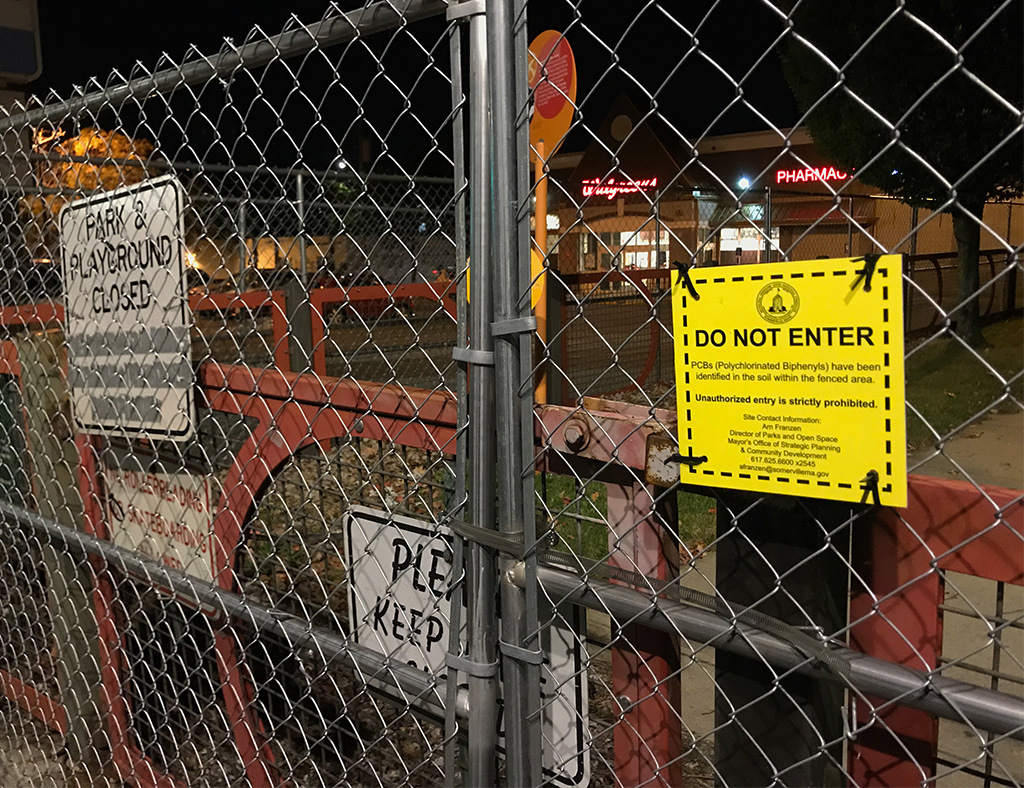 Chris Dwan, co-chair of the Somerville Urban Forestry Committee, lives behind the park, across the train tracks. He said he doesn’t feel like he draws any benefit from Conway Park.

“I no longer consider it a green space, honestly,” Dwan said. “The decision to go with turf rather than natural grass was a loss for the ecosystem services and a loss for the environment.”

“Green space is basically irreplaceable in the city,” Dwan said, referring to the fact that Somerville is the most densely populated city in New England, stuffing about 80,000 people into four square miles and leaving little room for open green space.

In recent years, Somerville has replaced natural grass with artificial turf in parks across the city. A recent post on the Green & Open Somerville environmental website identifies eight “plastic fields” either in place, under construction or approved for installation; site co-founder Renee Scott also believes the use of artificial turf is wrong, in part because its polyethylene plastic blades and crumb rubber infill is bad environmentally.

“The city will argue that, because they cool off at night, it’s not actually contributing to the urban heat island effect,” she said. “It’s 40 degrees hotter than any other space near it during the day.”

Natural grass is not viable in every open space, said Luisa Oliveira, director of public space and urban forestry for Somerville, while open space is a priority for the city and many residents depend on green spaces for use as athletic fields. “There is a shortage of playing hours to meet the demands of the recreation and athletic programs,” Oliveira said.

Artificial turf is better for athletic use because it does not flood like natural grass does, cannot be easily destroyed and can be used year-round, while “we do not have many large parcels that are big enough for fields. It’s about the environment, but it’s also about equity and opportunity,” Oliveira said. “Finding a balance between all the competing issues and the advocates is simply not as simple as people think.”

Another voice in the discussion is a study by physician researchers from University Hospitals, Case Western Reserve University and the UH Sports Medicine Institute finding that athletes “were 58 percent more likely to sustain an injury during athletic activity on artificial turf.” During the 2017-2018 athletic season at 26 high schools, researchers recorded a total of 953 injuries, with 585 of them occurring on artificial turf.

Jake Wilson, president of Somerville Youth Soccer, also lives near Conway Park. In a blog post, he said the discussion has become reductive.

“Either you care about the planet and want grass fields, or you care about kids and recreation and want turf fields,” Wilson wrote. “Except most ‘turf’ supporters I know care passionately about the environment … most of the ‘grass’ advocates I know have kids who played sports with [Somerville Youth Soccer] or another youth sports organization.”

Wilson recommends creating and protecting artificial and natural green spaces. Since the turf can be put anywhere, it doesn’t have to cover existing green spaces, he wrote. Residential areas and neighborhood parks could keep natural grass, and schoolyards and rooftop athletic fields could be used for artificial turf.

“For a city desperate to increase its limited green space, the impending loss of two-plus acres of grass at Conway is a backward step environmentally,” he wrote.

This article was syndicated by the Somerville Wire of the Boston Institute for Nonprofit Journalism. It was produced by students in professor Gino Canella’s Grassroots Journalism course at Emerson College. Marc Levy contributed reporting from Cambridge.

It was updated Feb. 10, 2021, with information from the Department of Public Works about whether there are plans to add another sports field and why a response to a City Council order has been slow to come.