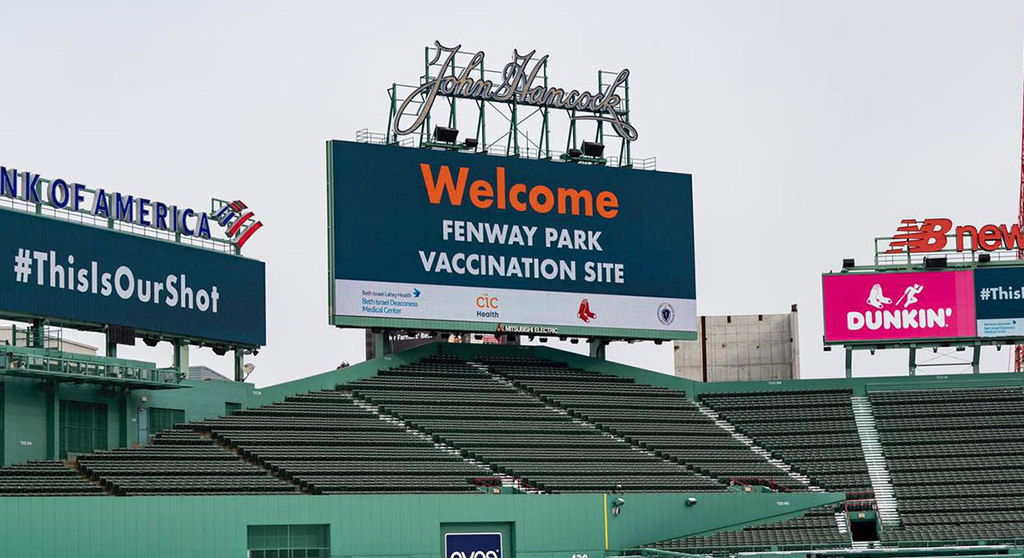 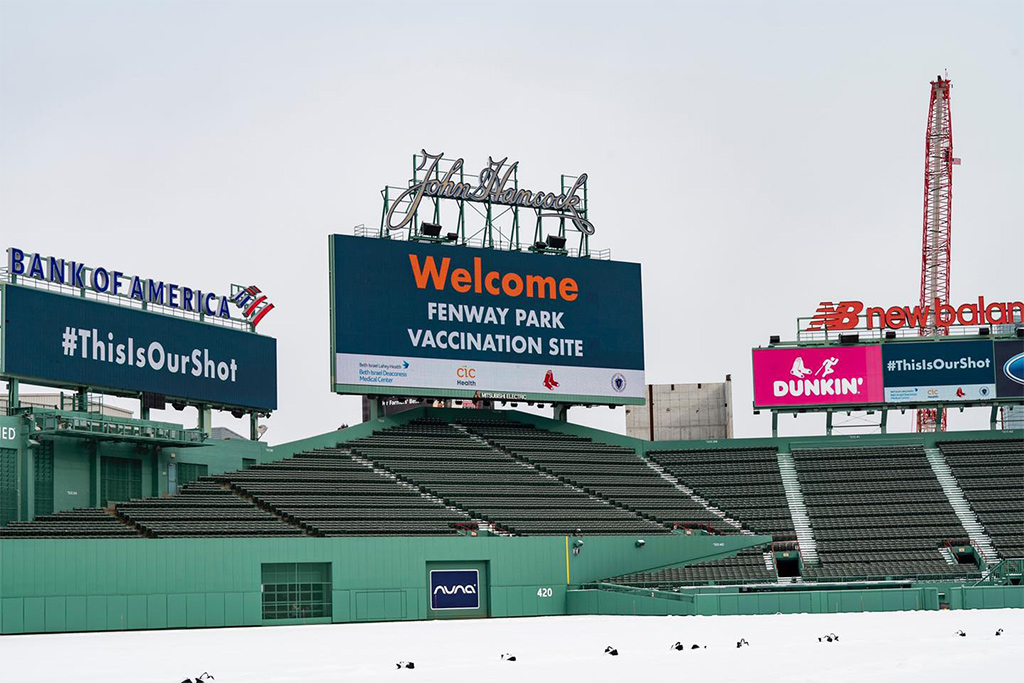 Fenway Park in Boston advertises itself as a vaccination site Jan. 29. (Photo: Fenway Park via Facebook)

City officials are still trying to establish a Covid-19 vaccination clinic for Cambridge residents, against increasing odds: The state is now refusing to ship vaccine to local health departments after March 1 unless they can demonstrate they can administer at least 750 doses a day, five days a week. And even if Cambridge meets the standard, any local clinic would need to serve the statewide population, not just people who live in Cambridge.

Despite the challenge, it could happen. City manager Louis A. DePasquale said at Monday’s meeting of the City Council that the city is talking to unnamed regional partners about a mass vaccination site that would be “supported” by the Cambridge Health Alliance. DePasquale said the Alliance would serve as the “regional health care delivery system for … residents.”

The Alliance operates the city health department under contract. It also is one of the few hospitals that has enough vaccine now to give first shots to its patients, although spokesman David Cecere said previously that the state has said it won’t send any more after CHA’s current stock runs out. Neither the Alliance nor the city health department has previously explained why they can’t or don’t coordinate on vaccinations.

Chief public health officer Claude Jacob said the Cambridge Public Health Department has the capacity and the ability to vaccinate the required number of people “based on our experience at the CambridgeSide mall” – a Covid-19 testing site that was also used for vaccinating first responders.

Still, it’s far from a done deal. DePasquale said that “given current vaccine supply issues, we know that this is not an easy or simple process.”

The newest state edict is one of many twists in the state’s vaccine allocation policies. The state has increasingly prioritized large mass vaccination clinics such as Fenway Park and Gillette Stadium; health and human services secretary Marylou Sudders says 90 percent of residents can drive to a mass site within 45 minutes. Critics say that assumes everyone has a car, can drive and has the time to travel. On Friday the state announced the March 1 cutoff for local health departments except in 20 cities and towns judged especially vulnerable to the virus.

Jacob said that “while we know there are vulnerable communities of color in Cambridge … we do not show the same burdens as experienced by some of the other cities and their risk levels.” The health department is “compiling data in alignment with the social vulnerability index, so that we can demonstrate and make the case for additional vaccine,” he said.

Meanwhile, the health department was forced to use its own remaining vaccine to give second doses of vaccine to first responders and homeless people in shelters last week instead of administering first shots to others, because the state didn’t ship any vaccine, according to minutes of the Feb. 17 meeting of the city’s Expert Advisory Panel, the group of scientists advising city officials on the pandemic.

Onsite vaccinations for some

Still, the department vaccinated residents of Russell Apartments and the Putnam School in their buildings last week, continuing onsite vaccinations for residents of low-income senior/disabled public housing developments. So far residents in six buildings, including the four largest, have received doses.

Cambridge Housing Authority executive director Michael Johnston said Monday that he was told that tenants at the remaining public housing sites for elderly and disabled residents, including smaller sites such as Weaver Apartments, Linnaean Street, 116 Norfolk St. and St. Paul’s Residence, will get shots this week.

Vaccinations at public housing developments and homeless shelters have included substantial proportions of black and Hispanic residents, according to figures provided by Jacob. Statewide, most shots have gone to white residents.

The health department is trying to counter vaccine hesitancy among black and Hispanic residents. It has hired two consultants to advise on strategies and is inviting residents to fill out an online survey on vaccination. Jacob said 1,300 surveys have been completed so far. But people who answer yes to the first question, asking if they have been vaccinated, are told they have finished the survey; it’s not known how many of the 1,300 completed surveys are from people who answered only one question.

Mayor Sumbul Siddiqui and Jacob are leading a Zoom webinar from 5:30 to 7 p.m. Tuesday on vaccine hesitancy; the program is in honor of Black History Month.

Although the city’s Covid-19 case rate has dropped this month, similar to the pattern in most other places, members of the Expert Advisory Panel warned of the threat of more infectious coronavirus variants such as the one originally found in Britain. The British variant is also more deadly. Last week the health department announced that a woman in her 20s who lives here was the first case in Massachusetts of the South African variant. It is also more infectious than the original virus and laboratory tests show that it is slightly more resistant to vaccines.