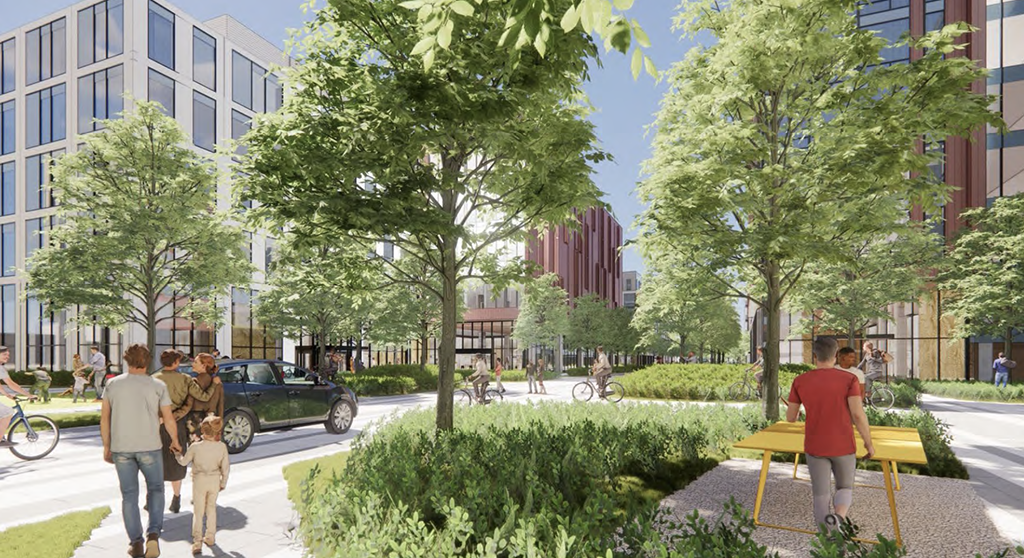 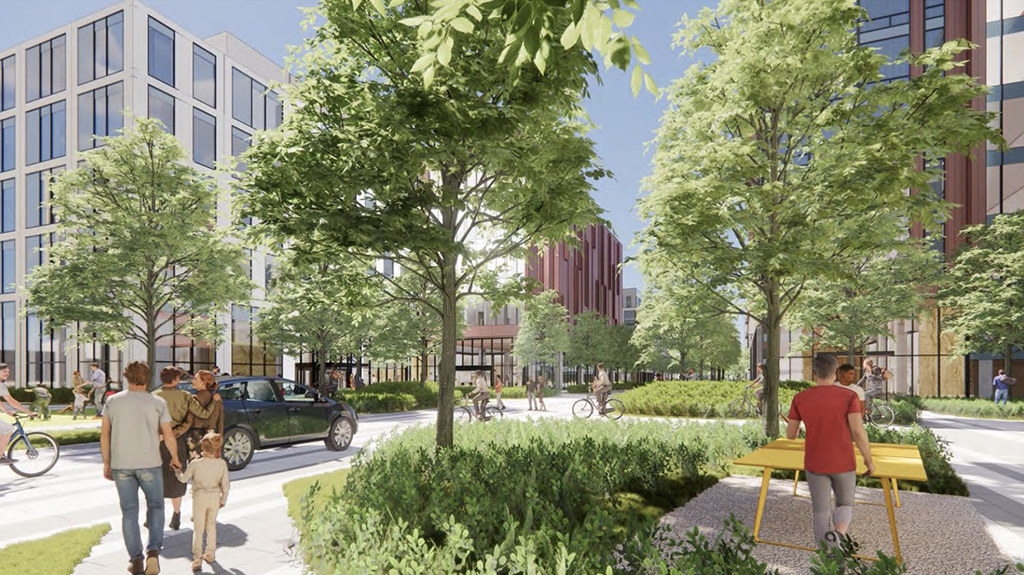 A rendering shows what Mooney Street would have looked like – with an “Alewife Commons” – in a rezoning petition that was defeated Monday. (Image: Cabot, Cabot & Forbes)

A remaking of 26 acres in the Cambridge Highlands, centered around 16 acres held by the developer Cabot, Cabot & Forbes, was defeated Monday in the City Council with seven votes against, one in favor and one “present” vote.

The hope was that the developer would try again, as the zoning known as the Alewife Quadrangle Northwest Overlay District moved closer to approval with each of four iterations since October 2019, and neighbors and councillors had most of their requests agreed to as of a March 5 commitment letter. It would mean adding some 490 apartments to the area, as well as retail such as a brewhouse and gym, instead of getting just the lab and office space that could be built without the sweeping rezoning. 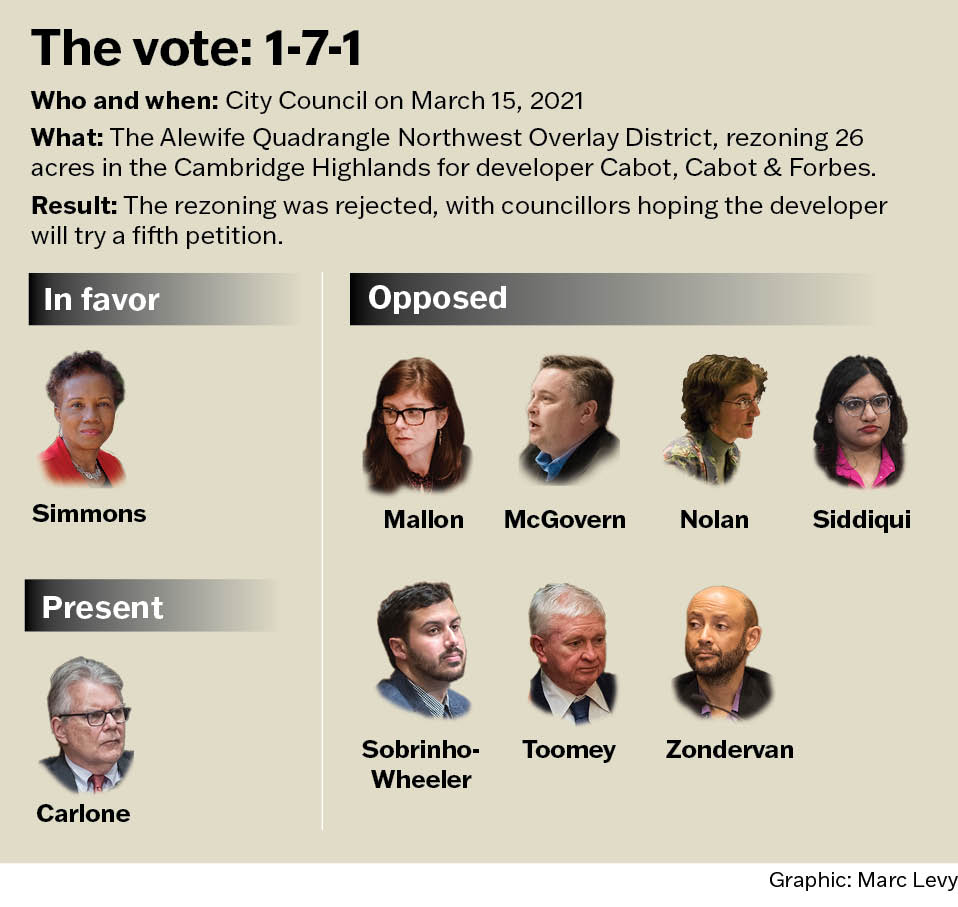 “I think they said this publicly – that their intention is to not refile,” said councillor Marc McGovern, who with councillor Dennis Carlone shepherded the proposed zoning over months as chairs of the Ordinance Committee.

Still, McGovern acknowledged before a vote that “clearly there’s a consensus amongst all of us that this isn’t ready.” He became one of the votes against, as Carlone voted “present.”

The sole vote in favor was from councillor E. Denise Simmons.

Speculating on what’s next

Jacob Vance, a senior development manager for Cabot, Cabot & Forbes who spoke for the company at Monday’s meeting – “We’ve come a long way from where we began, and frankly, we’re proud of the progress,” he said – was contacted by email after the vote to ask what was next for the 16 acres. He did not respond immediately.

After the meeting, McGovern and Carlone expanded on what they considered the most obvious options for the investors behind the company’s proposal: pursuing a special permit to build only lab and office space up to 55 feet, or selling the land to another developer. “And who knows what that means. Depending on who buys it and what they want to do, we’ll be starting all over again,” McGovern said. “Hopefully they’ll come back and refile it for a fifth time and we’ll be able to work something out, because we were very close to getting something done. But at this point, they have said that is not their intention.”

A draft version of the commitment letter is here:

Carlone confirmed that the developer said there would be no fifth filing – but speculated that the reason a sale was unlikely might encourage a refiling: Some of CCF’s investors are construction unions that will get more from a larger project. If the developer builds residential and retail, it gets more lab and office space. And the the current commitment letter is based on the current 16 acres, while nothing prevents the company from adding parcels in the other 10 acres the zoning would cover.

“If they sell the land, I’m sure it’ll be all labs. Will they build all labs? Because CCF is known for building housing,” Carlone said. “You know, I can’t say. It’s a hard one.”

Among the dozen members of the public who spoke on the zoning – excluding Vance and two union representatives – sentiment was largely opposed, including from those representing groups such as the Cambridge Residents Alliance and an Our Revolution chapter. Two residents associated with the group A Better Cambridge spoke in favor.

A common theme of the opposition, including among some councillors, was distrust of the developer after its actions in East Cambridge, when it proposed a three-story, 40-unit residential building on Fulkerson Street; after winning a special permit for the project from the Planning Board in September 2016, four months later the parcel was bought for $6.6 million and flipped two hours later to Eversource for $13 million. There was an outcry when the utility company revealed it planned to build a substation in the residential area across from a school and park, leading to a deal in which it agreed to relocate to Kendall Square, with developer Boston Properties hosting it in exchange for another 800,000 square feet of development – a $160 million value, Carlone said at the time.

“Given concerns over the trustworthiness of the developer, it’s easy to understand why people are pretty hesitant to do something without [the agreement] being explicit and ironclad,” councillor Patty Nolan said after the meeting. “Yes, there’s always last-minute negotiations. But it should not be this monumental.”

Cabot, Cabot & Forbes’ Jay Doherty said shortly after the flip that it had been done by a partner, without his company’s knowledge or approval. The maneuver was handled by a limited liability company seemingly formed for the purpose that “never filed an annual report and was involuntarily dissolved in 2019,” East Cambridge title examiner Heather Hoffman told councillors in a Monday letter.

Councillors and residents also expressed unhappiness Monday over the city’s failure to do planning, turning each major parcel into a war between developers pushing for maximum profit and stakeholders seeking to extract as much community benefit as they can. A yearslong master planning process called Envision Cambridge finished in 2019 remains undebated or voted by the council; on Monday, Vance said the CCF project followed Envision goals only minutes after resident Suzanne Blier criticized it because it didn’t.

After resident Mike Nakagawa decried the resulting “patchwork of zoning,” councillor Jivan Sobrinho-Wheeler found another metaphor. “The city should be doing comprehensive rezoning and using public funds for public benefits, not having to be doing all of these one-offs with developers all the time where we’re in a game of chicken around community benefits and worrying if we don’t go forward, we could not get them,” Sobrinho-Wheeler said.

The prime community benefit in this case was a bridge over Alewife train tracks, a long-sought goal for the neighborhood. Residents continued to worry that the developer’s commitment wasn’t solid enough, and that the commitment didn’t ensure a bridge wide enough for a shuttle bus, while others said the placement of the bridge made it of benefit mainly to future CCF tenants, instead of to the wider community. (Vice mayor Alanna Mallon agreed, while Nolan said she felt the developer “did address the bridge as much as they could.”)

The city’s talk of building a second bridge that was more convenient to greater numbers of residents, and to a future commuter rail station, is really just as vaporous, Carlone said.

“There is no city bridge,” Carlone said. “We’re a wealthy city, and if we wanted a bridge, we’d build a bridge. I think the present mentality in the city is, ‘Oh, we’ll get a developer to do it.’”

This post was updated March 16, 2021, with information from title examiner Heather Hoffman.