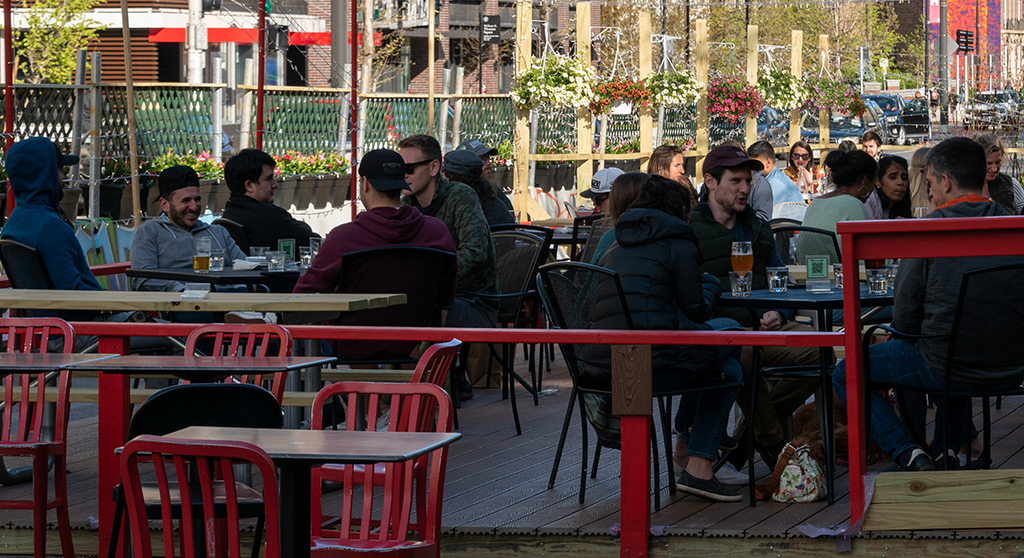 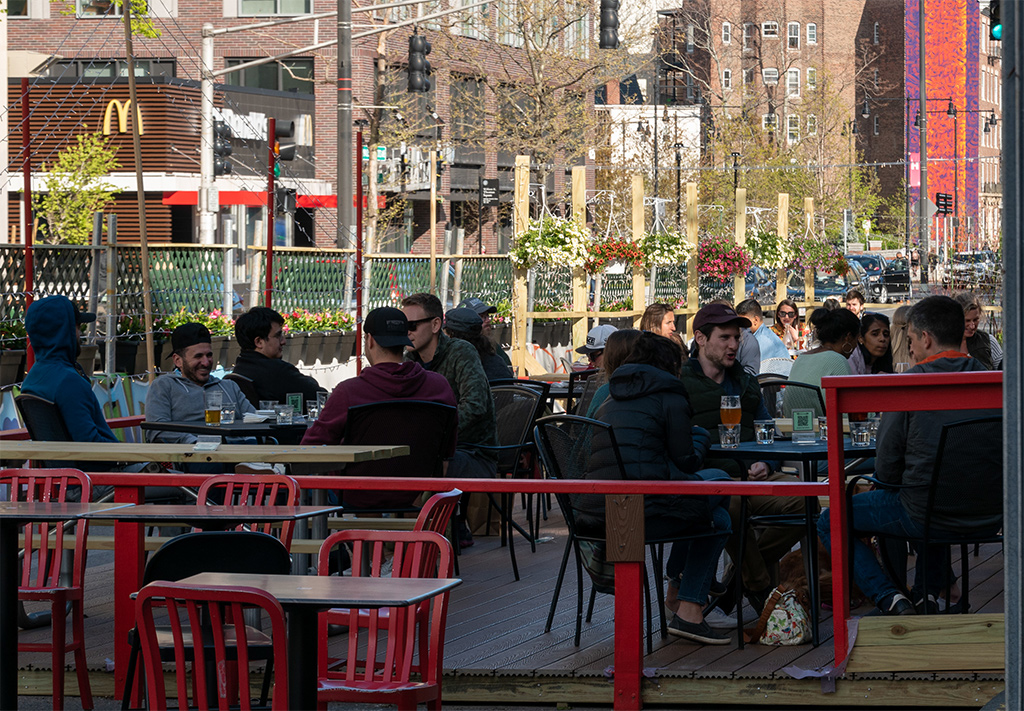 Encouraging outdoor dining in Central Square – and throughout the city – comes back to the City Council for discussion Monday. (Photo: Tyler Motes)

City Council, 5:30 p.m. Monday. Despite the city manager trying to dilute a feasibility study of city-owned Internet in a sea of digital equity initiatives – debated at length last week in a Finance Committee hearing – there is no money for digital equity work in the city’s budget for the next fiscal year, or a timeline for implementation; considering how many years the manager has delayed on that municipal broadband study, councillor Marc McGovern may be smart to be filing an order now calling for a digital equity implementation plan, schedule and request for appropriation no later than Sept. 1 (and to get in on available federal digital equity materials).

Councillors are also going on record supporting the continuation of outdoor dining, as petitioned for by the Cambridge Business Coalition, which may come into play as a call to close Massachusetts Avenue in Central Square to cars on weekend nights through September returns to discussion from last week. (Campaign finance reform orders are also returning for debate.) In a very different kind of order around transportation, there’s a call to figure out Alewife traffic and congestion now before a bunch of developments get underway and things get even worse. And councillors want to know plans for summer recreation at the Gold Star Mothers Pool on Berkshire Street in the Wellington-Harrington neighborhood, especially since the three swimming pools at the War Memorial Recreation Center will be undergoing repairs this summer.

From the staff side of things, the city is getting back to implementing universal pre-kindergarten after the long-awaited work was derailed by the pandemic; suggesting there’s little value at this point to encouraging more Covid antibody testing; weighing in on tree protection laws; and explaining why an infamous “anti-aid amendment” keeps Cambridge from giving direct financial help to residents and businesses even as cities such as Somerville seem to – the short answer from a Law Department response being that there has to be a statute allowing it, such as a special act okaying an economic development district. The council is also expecting to hear back officially on allowing acoustic music at nontraditional venues, which is essentially unchanged from what the License Commission outlined March 1.

More on the next budget, department by department

Finance Committee, 10 a.m. to 5 p.m. Tuesday. This committee run by city councillors Dennis Carlone and E. Denise Simmons will take on a bunch of municipal department budget items for the 2022 fiscal year – councillors’ choice from a buffet of 19 departments and sides, ranging from the Cambridge Health Alliance and our public libraries to the Community Development Department and Public Works, from Veterans’ Services to the worthless Police Review & Advisory Board. Televised and watchable by Zoom video conferencing.

School Committee, 6 p.m. Tuesday. With the Pfizer-BioNTech Covid-19 vaccine okayed for kids 12 years and older, committee members are wondering if doses could be administered in the upper schools and high school. And after Eversource natural gas promotions making no mention of climate change were distributed at the Tobin School a couple of weeks ago, they’re asking to ensure that no more commercial materials go out in violation of district policy. There’s also the lingering matter of misogyny, gender-based discrimination, sexual harassment and sexual assault within the district, which became official committee business in 2016; members want an update on the recommendations adopted in 2017 meant to tackle the issue. Televised and watchable by Zoom video conferencing.

Planning Board, 6:30 p.m. Tuesday. No one’s favorite Harvard Square institution – Santander Bank – is asking to relocate to the former Qdoba space at 1290 Massachusetts Ave. from its 1420 Massachusetts Ave. space, a change that violates the intent of the Harvard Square Overlay District to decrease the amount of street space banks take up; this expansion of frontage would break the rules twice, and drew a negative recommendation from the Harvard Square Advisory Committee because of it. (Meanwhile, another potential bank relocation, in which a Citizens Bank could cross the street to take over the former Rodney’s Bookstore space at 698 Massachusetts Ave., Central Square, seeks an extension.) There’s also some discussion of a Kendall Square infill plan on the agenda, and new land use classifications and regulations for delivery-only cannabis businesses. Televised and watchable by Zoom video conferencing.

Discussion of housing for a Cherry Street lot

35 Cherry St. community meeting, 6 to 8 p.m. Wednesday. The lot at 35 Cherry St., The Port, turned over to the city in April 2013 by the Massachusetts Institute of Technology as part of a zoning deal, has gone untouched since; councillors have called for city staff to talk with the community about what kind of housing should go there to meet the area’s most pressing needs. Watchable by Zoom video conferencing.

Finance Committee, 6 p.m. Wednesday. The committee has set aside time to discuss the school department budget for the 2022 fiscal year. Televised and watchable by Zoom video conferencing.

Straggling FY2022 budget items (if any)

Finance Committee, 9 a.m. Thursday. The committee reconvenes only if needed to address items from the 2022 fiscal year budget that couldn’t be completed at the series of hearings begun last week. Televised and watchable by Zoom video conferencing.

Board of Zoning Appeal, 6 to 11:30 p.m. Thursday. The case of 2072 Massachusetts Ave., North Cambridge, returns: a proposal for 48 affordable apartments within a nine-floor portion (facing the avenue) and a five-floor portion (on Walden Street). A neighborhood group and some residents at the Leonard J. Russell Apartments next door have organized to protest the project’s size and question what it will mean for traffic, parking and safety, as well as for the senior housing; other residents praise the project and are rallying around the need for affordable homes. Note the board leaving 5.5 hours for one agenda item.Watchable by Zoom video conferencing.