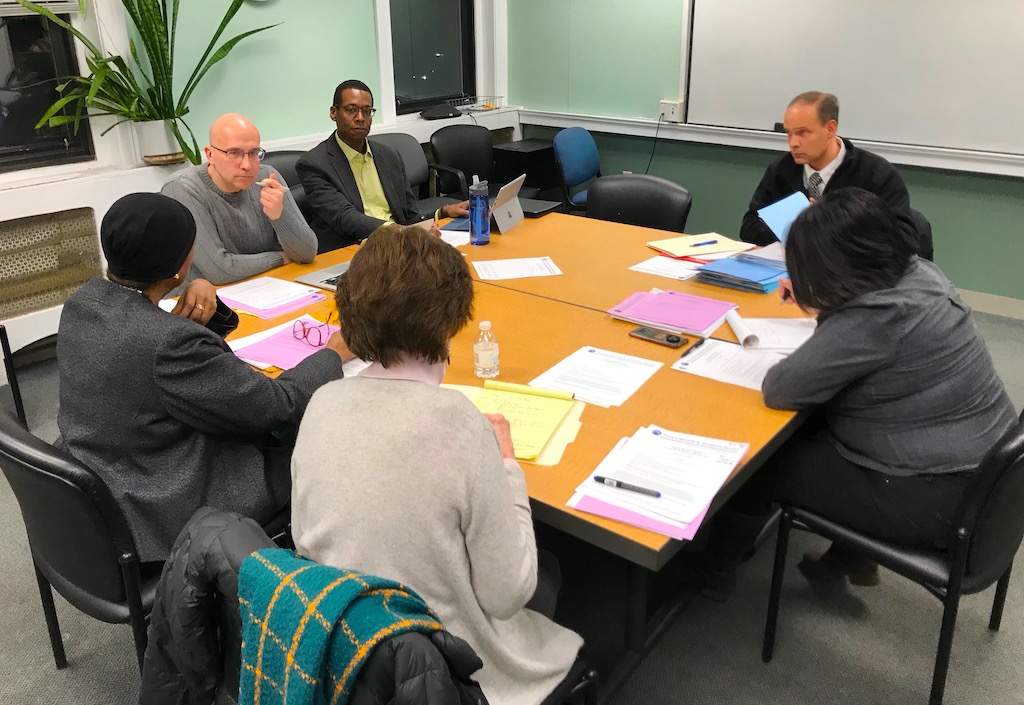 The Police Review & Advisory Board meets Jan. 30. About a half-hour after telling the filer of a complaint that the matter wasn’t on the PRAB agenda, the board met on the matter – and dismissed it. (Photo: Marc Levy)

The city’s License Commission and Police Review & Advisory Board have both been found guilty by the Office of the Attorney General of violating state law. The office issued its finding against the commission July 3 and a finding against PRAB last week.

The board tasked with overseeing the police department received a citizen complaint and handled it in a closed-door session without ever talking with the citizen – and without admitting it was about to discard the matter despite being asked about it only a half-hour earlier, at the start of the meeting, acknowledged Sarah Chase, an assistant attorney general with the Division of Open Government in a Tuesday decision.

It’s at least the third time the oversight board has opened and shut a complaint without talking to the citizens who filed them; residents got in touch with Cambridge Day to explain their experiences after an accounting of the mishandling of Cambridge Day’s own complaint in February.

The complaint filed by Cambridge Day was about police commissioner Branville G. Bard Jr., who voted as a member of the License Commissioner to find bar owners guilty of criminal statutes about making “threats” and punish them for it – even though the “threats” were non-physical comments about filing a complaint or lawsuit and covered by the First Amendment. The state chapter of the ACLU said Bard’s actions raised “serious free speech issues” and the city’s own police expert admitted in testimony before a state agency that there was nothing illegal in the comments made by the bar owners.

The case against Bard was never explored because the board’s executive secretary, city employee Brian Corr, took the matter to city solicitor Nancy Glowa, who “advised that the board did not have jurisdiction,” Chase wrote. PRAB affirmed that decision in a closed-door meeting.

The board’s enabling statute doesn’t allow Corr to consult with Glowa about whether to take a case, making for a violation of city law. But because that isn’t an Open Meeting Law matter, Chase didn’t consider it.

But the board did violate Open Meeting Law by going into a closed-door session without “affording certain rights to the subjects of the complaints to be discussed” and by lying to the complainant, saying the matter wasn’t being considered when it was actually being considered just a half-hour later, according to Chase’s findings. Not telling Bard of the case was another violation.

The Office of the Attorney General has decreed that the unredacted minutes of that discussion must be made available to the complainant and to Bard and correct its agendas for “immediate and future compliance with the Open Meeting Law,” Chase wrote. “[We] caution the board that similar future violations may be considered evidence of an intentional violation.”

The city argued that it didn’t want to identify topics being discussed in closed-door session for the sake of the accused police officers, who “have a privacy interest in not having it publicly disclosed that they are the subject of such complaints,” Glowa wrote, citing legal cases about the release of files and “disclosure of facts” about allegations against officers But Chase agreed with Cambridge Day’s complaint to the state that PRAB’s agendas could simply use the case numbers supplied to complainants. “The subject’s privacy could be maintained even if the complaint number is listed … because these numbers contain no identifying information,” Chase wrote. “Furthermore, the Cambridge city code requires the board secretary to keep a public docket of complaints. The board should include on its meeting notices all identifying information that is already public as part of this docket.”

In the License Commission complaint, chair Nicole Murati Ferrer prepared a “statement of reasons” about a hearing held Nov. 7 to decide punishment for the bar UpperWest after deciding its owners were guilty of setting out tea lights for atmosphere – though there is no law against it – and for “threatening” fire inspectors – though the inspectors themselves and a police expect have testified that the nature of the threats were legal, such as job complaints or lawsuits.

In addition to simply having “memorialized” the discussion that took place, though, the chair also analyzed the findings, going outside of what was heard Nov. 7 to express an opinion. That made the statement of reasons improperly “a vehicle for continuing the meeting’s discussion outside of a noticed meeting,” Chase wrote. “This communication constituted deliberation outside of a meeting in violation of the Open Meeting Law.”

The owners of UpperWest, Kim Courtney and Xavier Dietrich, also learned from a public records request that Bard and acting fire chief Gerard Mahoney hadn’t submitted the Open Meeting Law certification forms demanded of “all persons serving on a public body” within two weeks of qualification of office, ensuring that they understand the requirements of the law and the consequences of violating it.

Bard started in Cambridge on Aug. 21, 2017, and Mahoney became acting fire chief March 6, 2017, though he had been a long-serving stand-in on the License Commission. Neither filed OML certifications until Dec. 4, or more than 15 months and 21 months after taking office, respectively. That date was after Courtney and Dietrich filed to find out if the public officials were familiar with the law as required.

The City Manager’s Office was asked for comment on the two findings of guilt from the Office of the Attorney General.

“The city administration takes very seriously the Open Meeting Law and all of the other federal, state and local laws that apply to city operations. The city’s public bodies and the staff supporting them work very hard in good faith to comply with the many requirements of the Open Meeting Law in connection with each one of the hundreds of municipal meetings subject to the Open Meeting Law that are held each year by the city and its boards and commissions. The city will comply with the two recent decisions issued by the Attorney General’s Division of Open Government and will continue to maintain the high standards required by the law and by the city administration’s commitment to an open and participatory local government. Please know that city staff assigned to these boards and commissions work extraordinarily hard and that the city manager has the utmost confidence in their commitment to the city and believes it is their intention to comply with all legal requirements at all times.”

In informing the City Council of the findings and the response later that day, though, Gianetti went on to tell councillors something that wasn’t true: “that none of the specific claims … complained of in [the citizen police oversight board] OML Complaint to the AG were substantiated.”

Chase’s introduction notes that the complainant alleged that PRAB broke the law by “failing to list a matter on its meeting notice, failing to inform [when a] complaint would be voted on in an executive session, and denying … information about his complaint.”

All of those complaints were substantiated by the Office of the Attorney General. Chase notes in the very next paragraph:

Councillor Craig Kelley, who was asked about the state’s findings because he leads the council’s Public Safety Committee, said he thought the issues raised about open government and compliance with th laws were worth a formal discussion, though in a different committee.

“I think it is worth a Government Operations meeting to discuss OML training and related requirements to help ensure we avoid future compliance issues,” Kelley said. “[I] will suggest such a meeting be held.”