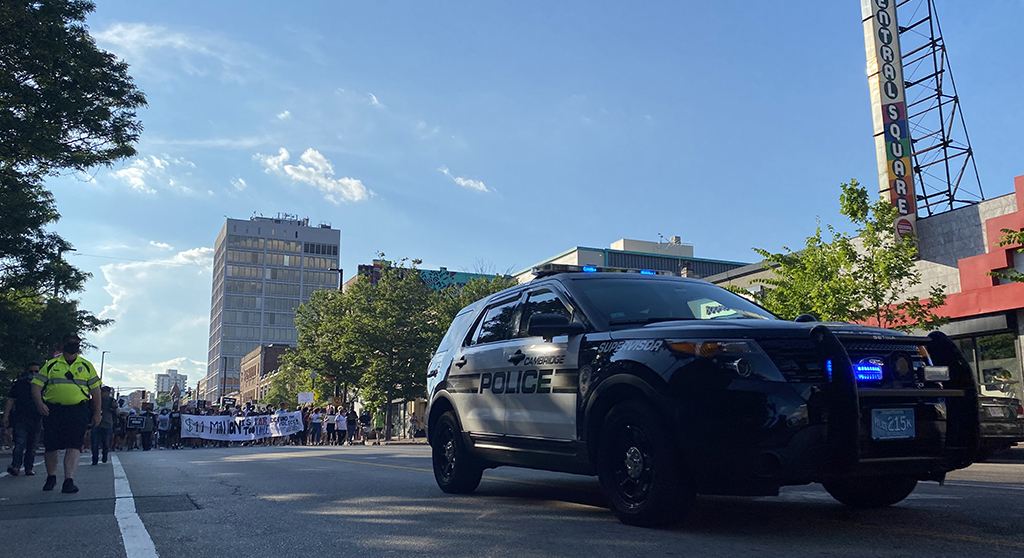 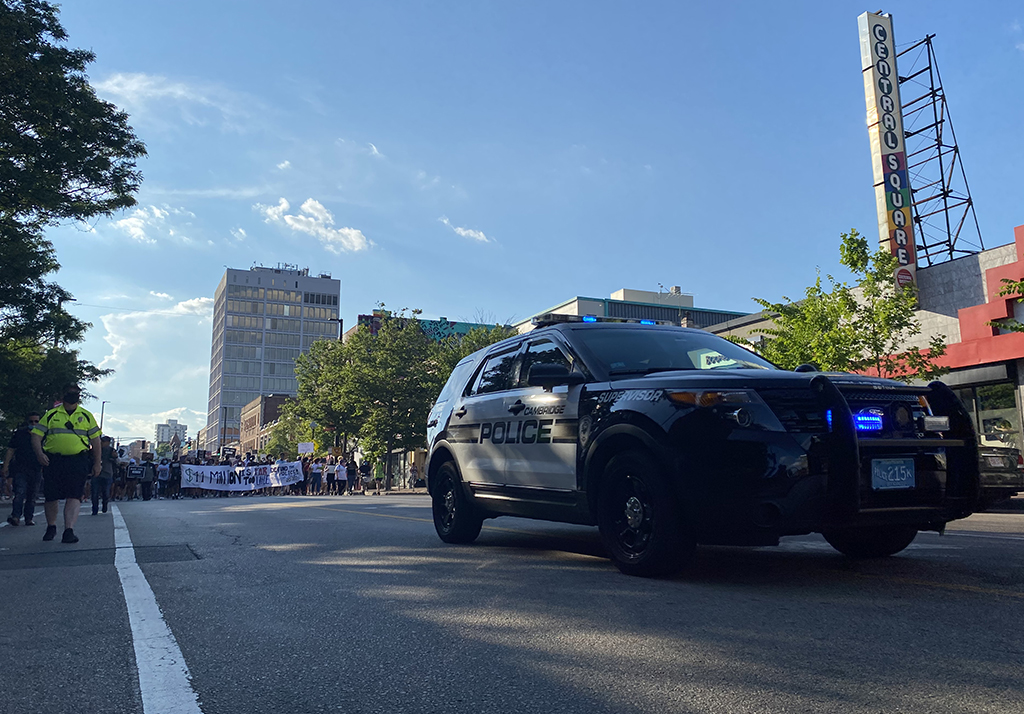 Some 2,000 people march June 20 through Central Square with a call to “defund police.” (Photo: Marc Levy)

Actions broadly part of the “defund police” movement took steps forward Monday as city councillors called for a study of starting an alternative Public Safety Crisis Response System and asked formally to see the city police department’s list of equipment, to judge for themselves whether it is over-militarized.

The proposed Public Safety Crisis Response System would begin work in the next fiscal year, meaning some time between July 2021 and July 2022, as suggested by vice mayor Alanna Mallon with co-sponsors Mayor Sumbul Siddiqui and city councillors E. Denise Simmons and Jivan Sobrinho-Wheeler.

“When calls come in around housing or homelessness, mental health and addiction, grief and loss, suicide prevention and more, an unarmed response team may be better able to handle and de-escalate than a police officer,” Mallon said. “Declaring racism as a public health emergency is just pretty words on paper if we’re not doing the hard work of reimagining a more racially just community – and that means ensuring that public safety is safe for all.”

Increasingly, people nationwide are vowing not to call police for incidents or problems they feel might spiral unnecessarily into violence if police became involved; the Black Lives Matter protests and marches still raging after weeks were sparked in large part by the deaths of people of color for calls that wouldn’t seem to demand violence, or force. The face on the most protest signs of the year, George Floyd, died after a store clerk called police upon getting what they suspected was a counterfeit $20 bill.

Several people spoke to support alternative policing during Monday’s public comment period, with a couple stressing that it “must be 100 percent unaffiliated with the Cambridge Police Department” and that there be “zero police involvement with training, implementation or funding.” But officer Michael Daniliuk called in as well, arguing for keeping social services funding within the police department: “We have social workers on board. We have a psychologist on board. And sometimes the calls are handled by them and police officers don’t have to be involved. We already do that.”

Models for alternative policing in cities such as Nashville, Tennessee, could jump-start work by staff, and councillors homed in especially on one called Crisis Assisting Help on the Streets in Eugene, Oregon, that began in 1989 and serves a county of some quarter-million people. Twenty percent of annual emergency calls are handled by the group rather than by police, or 24,000 calls, councillors said. “Only 150 times was police backup requested” during a recent year of those calls, councillor Patty Nolan said.

The order passed unanimously, with all councillors ultimately joining as co-sponsors. City staff is asked to report back by Sept. 14.

Also passing unanimously was an order by councillor Quinton Zondervan with Sobrinho-Wheeler to see a list of police equipment. The order resulted from their attempt to redirect $4.1 million in police funding to human services hiring. During a defense of his budget, police commissioner Branville G. Bard Jr. said the perception his department was militarized was incorrect despite its sniper teams, bomb squads and armored vehicles. Bard said his department had no “military equipment.”

Zondervan said he wanted to see for himself, considering his recent spotting of the department’s 18,000-pound, 10-person armored BearCat “rescue vehicle” rumbling past his home.

It was irrelevant to the order, Zondervan said, since it asks merely to see “an itemized statement of all materials, tools and property” owned by police. (By law, the list is produced annually for the city manager; but it has not been automatically shared with the council.) He accepted an amendment that photos of equipment be provided when “possible” to help councillors assess it – though by doing so he turned the list from an existing document that could be handed over immediately into one that could see delays as police opt to take or find photos.

The order had already been delayed from last week by Simmons, who said the list on its own would be meaningless and that she wanted to instead “review and address any systemic racism blind spots throughout our entire municipal government.”

On Monday, her order for a review of the entire municipal government to eliminate racism and bias was a third item that passed unanimously, and another in which every councillor was added as a co-sponsor.

Councillor Dennis Carlone had a concern, though, that the review would be tainted by politics or warped by people being forced to probe their own actions. “This study should be done by an outside, neutral source, and not city personnel … city staff should be reviewed,” he said. “And frankly, I don’t even think it should be us, the council [doing the review].”