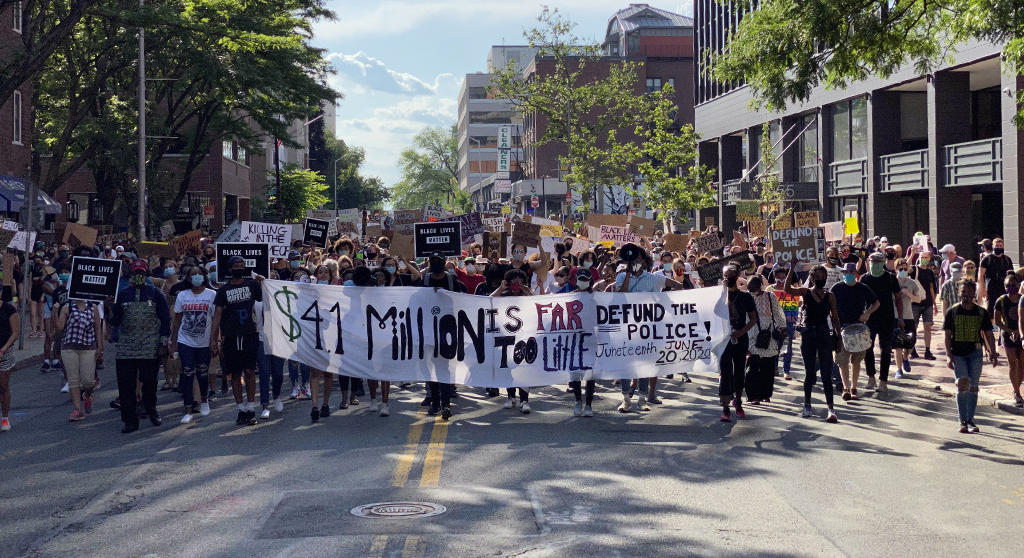 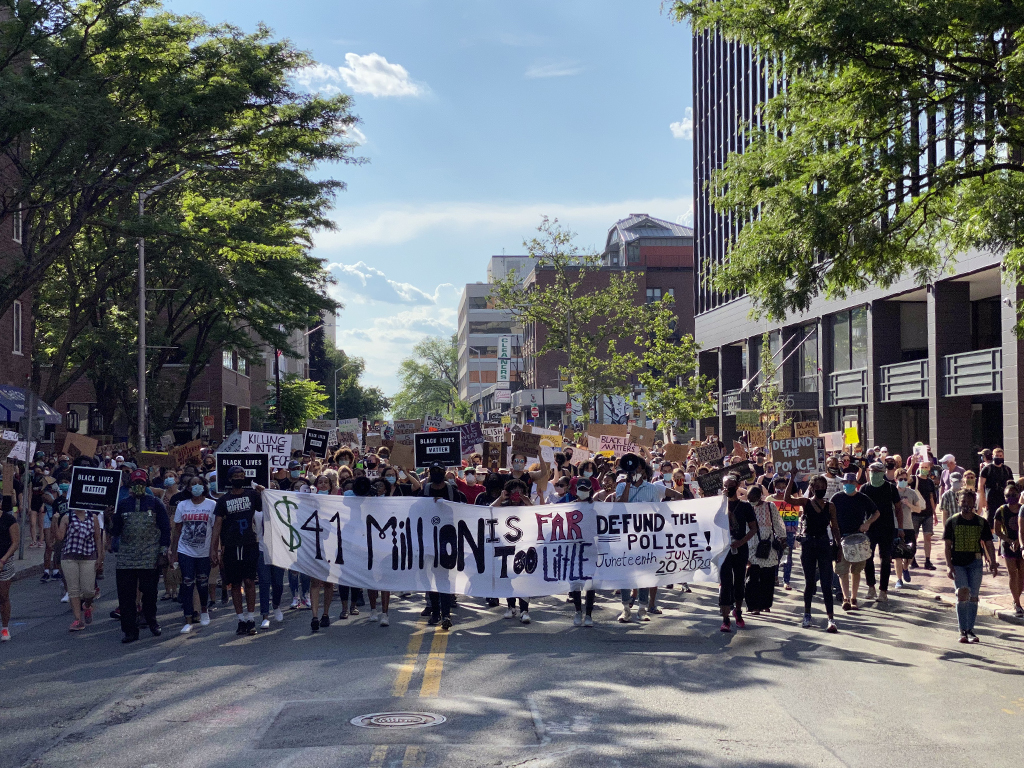 A crowd of 2,000 makes its way down Massachusetts Avenue to City Hall on Saturday. (Photo: Marc Levy)

A peaceful protest drew some 2,000 people Saturday, gathering under the Black Lives Matter flag but marching from Cambridge Common behind the banner of defunding the police, with speeches saying a $4.1 million reallocation debated in City Council meetings was “far too little.”

The amount is “a drop in the bucket [and] an insult to all the precious black lives” lost to police violence, event co-organizer and leadoff speaker Jay Wilson said, telling the mix of black and white faces assembled on the Common that “we need to defund the police. We need to [instead] invest in critical community resources like education and affordable housing.”

The theme was sounded repeatedly over a three-hour event beginning at 4 p.m. – bumped from 1 p.m. to avoid the worst of the day’s heat, but followed by temperatures in the 90s nonetheless. It was pulled together in just the past six days, launched by the Wilson siblings of Ayana, Jay and Ashia but accomplished by a large crew that formed rapidly around the idea, including several members of the Black Student Union at Cambridge Rindge and Latin School. Unlike a previous gathering on the Common on June 7, this event was planned initially without police involvement, and protesters were braced for conflict; when putting it together, co-organizer Jacklyn La Polita Janeksela put out a call for volunteers to provide jail support and monitor police scanners. 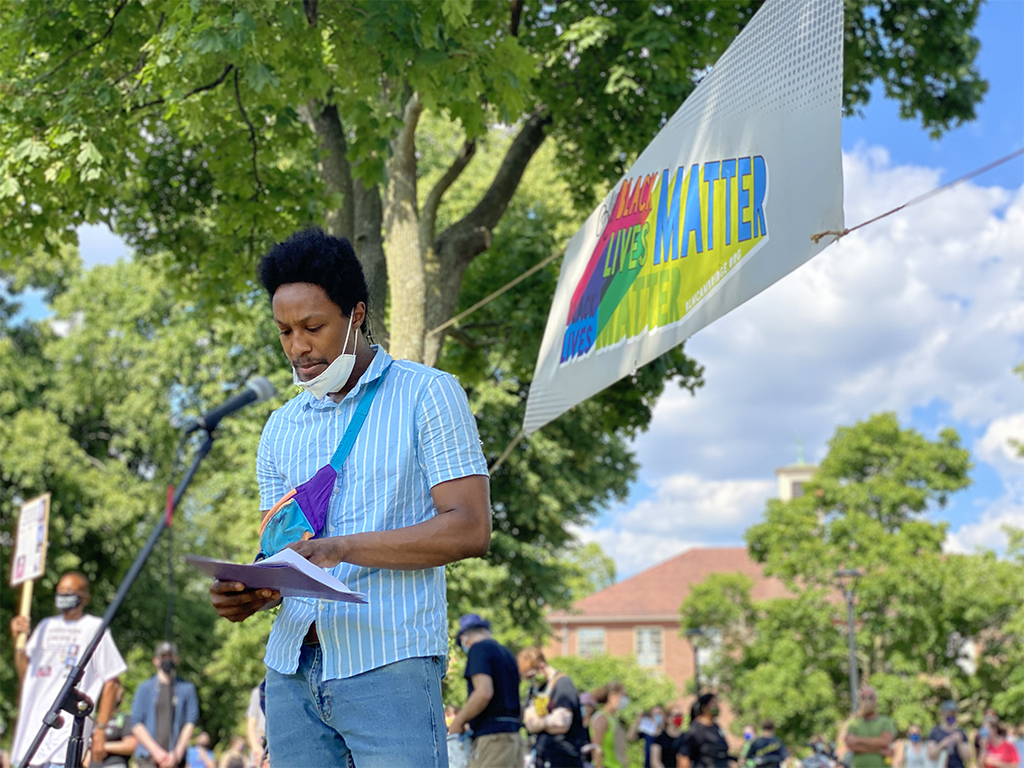 But police reached out after organizers submitted an outlined plan to the city’s events committee, said Jeremy Warnick, director of communications and media relations for Cambridge police. The streets were closed Saturday to traffic by police in vehicles and on bikes to enable the marchers to make their way safely through the city, and police officials and event organizers coordinated throughout the walk to City Hall and then to police headquarters near Kendall Square, which was cordoned off to keep protesters away from the building.

Jay Wilson’s speech referred to the unsatisfactory $4.1 million order being “under consideration,” but in fact the council resolved it Monday. Councillors agreed to a $2.5 million compromise from the city manager to freeze police hiring and instead prioritize hiring for human services needs in the next fiscal year.

Protesters may have been unaware that the makers of the motion, councillors Quinton Zondervan and Jivan Sobrinho-Wheeler, were on the Common with them; and they may not have known that Zondervan, when found again toward the end of the march, agreed with them. He said he was surprised to show up and realize that the council order was a focus of the protest, along with Juneteenth goals of of honoring Black freedom and resistance, investing in Black communities and getting President Donald Trump to resign.

“I completely agree with them. It seemed like a reasonable [idea] that maybe we could accomplish, but it turns out we couldn’t even get that,” Zondervan said, noting the original $4.1 million proposal was cut to $2.5 million. “We had a two-week window. Hopefully, we will successfully transfer this [protest’s] energy into a conversation about next year’s budget.”

The event had several speakers, including poet Toni Bee, who invoked motherhood by recalling the final words of George Floyd as he was killed on Memorial Day in Minneapolis, helping spark the current wave of protests: a gasped plea for “mama.”

“I just want my babies to come home,” Bee said. 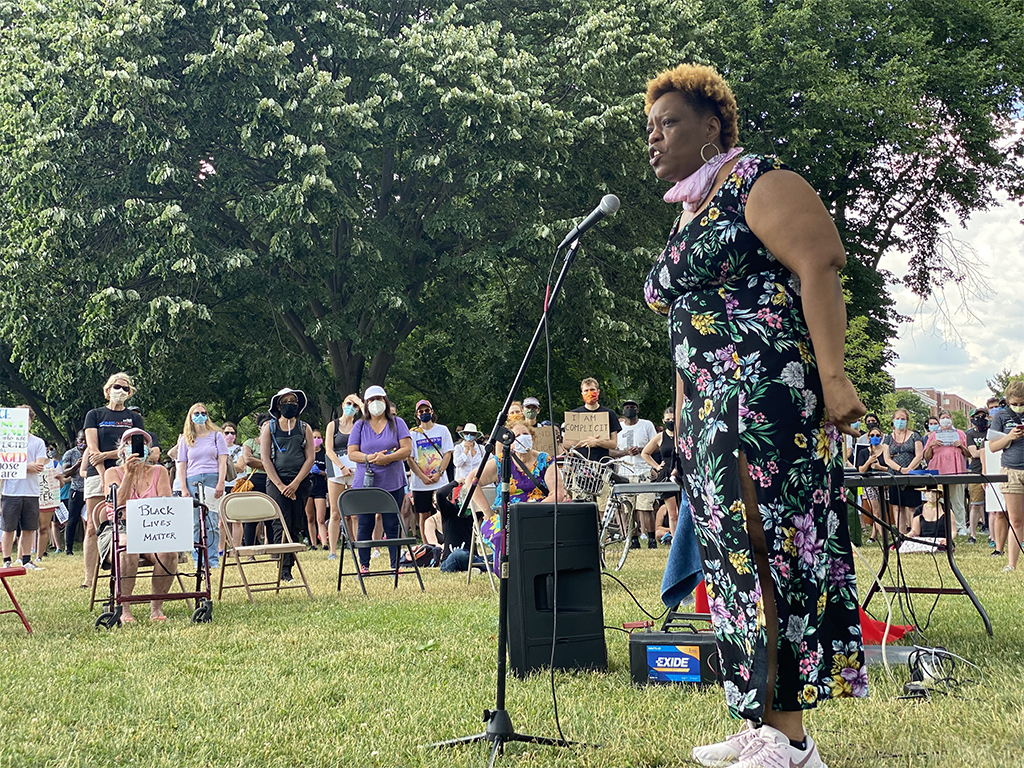 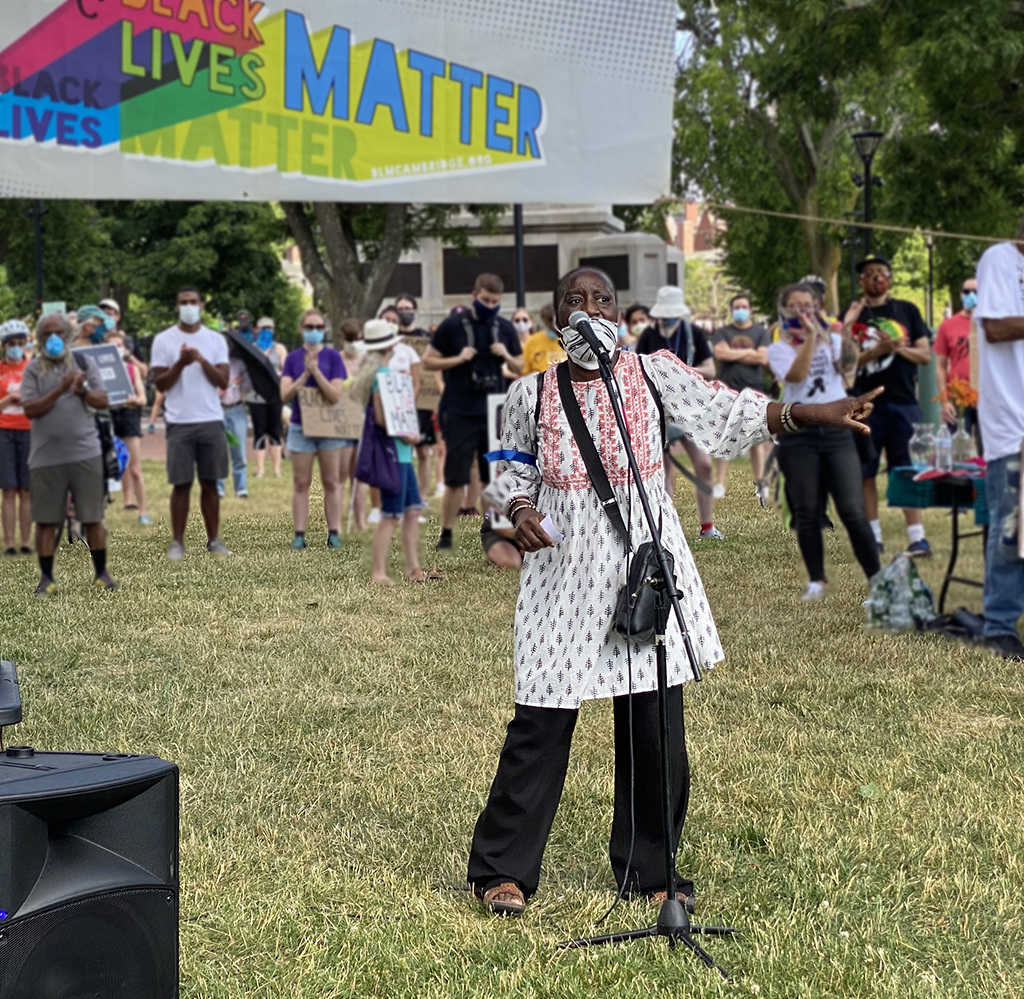 Karlene Griffiths Sekou spoke next, expanding on the message to speak more explicitly about the police presence in Cambridge. “Because we’re leaning on freedom’s side, we don’t need police in our schools, we don’t need those in uniforms … to catch, monitor, demonize and cage our communities, cage our babies,” Griffiths Sekou said in an electrifying rasp. “Get them out of our schools. The police aren’t for us – they’ve never been good for us and never been good to us. We don’t need them. We can keep us safe. We will keep us safe.”

Even later speakers acknowledged that residents lived in “a bubble” where there was no Cambridge Police Department shooting of a person of color to ignite their rage – just an ongoing environment of racism in which police played a role. During a pause at City Hall at 5:30 p.m., a recent CRLS graduate who had been active in the Black Student Union said of the group: “We’ve been screaming for help for three years. Why has nothing changed?”

This was the 18th such local protest event with police involvement since Floyd’s killing. With 2,000 marchers – growing in numbers from the Common to Kendall Square – it was the largest march, Warnick said, but dwarfed by the 3,500 people who gathered for a protest on the Common on June 7. 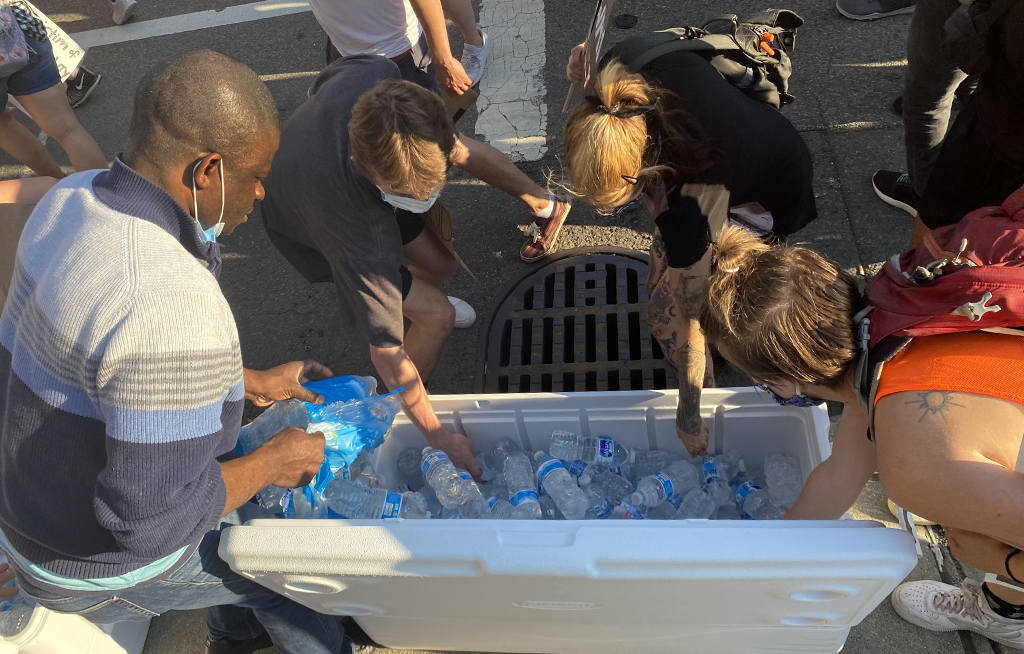 Water was provided by the 7-Eleven in The Port to marchers suffering under Saturday’s 91-degree sun. (Photo: Marc Levy) 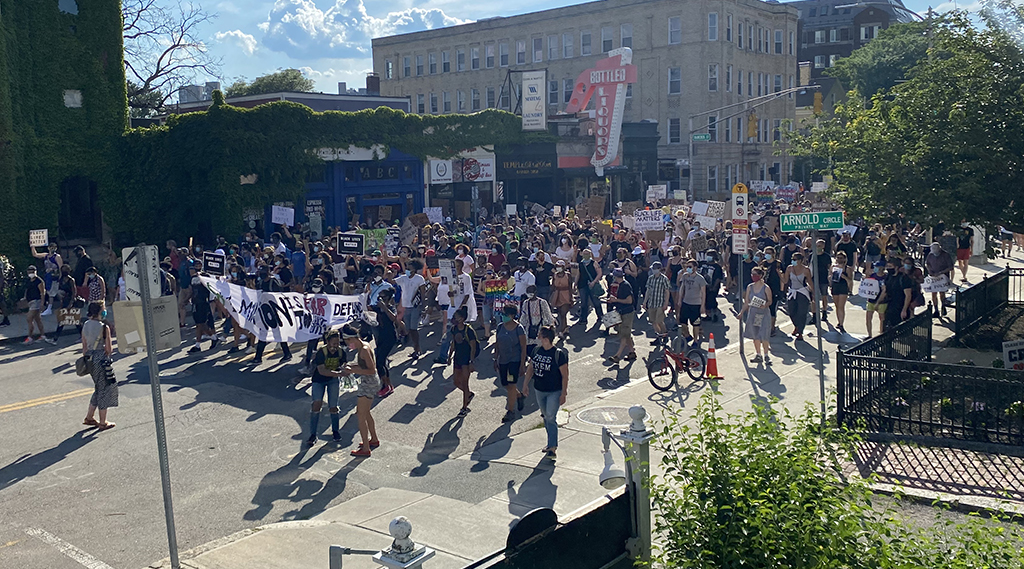 Saturday’s march was the largest to make its way through Cambridge streets in the recent wave of protests, police say. (Photo: Marc Levy)

The June 7 protest directed people to take part in the City Council meeting the next day that saw the introduction of the motion to defund the police of $4.1 million, but the slew of public commentary that followed was rejected by police commissioner Branville G. Bard Jr. as “not true deliberation” in which he “didn’t hear authentic voices,” but just “a bunch of people looking for their ‘I’m a black ally’ receipts, hoping they could somehow use it to pay off white guilt.”

Saturday’s rally, though, was another Black-organized rally for Black Lives Matter with a theme of defunding at which demands escalated beyond even what had been proposed by the council. 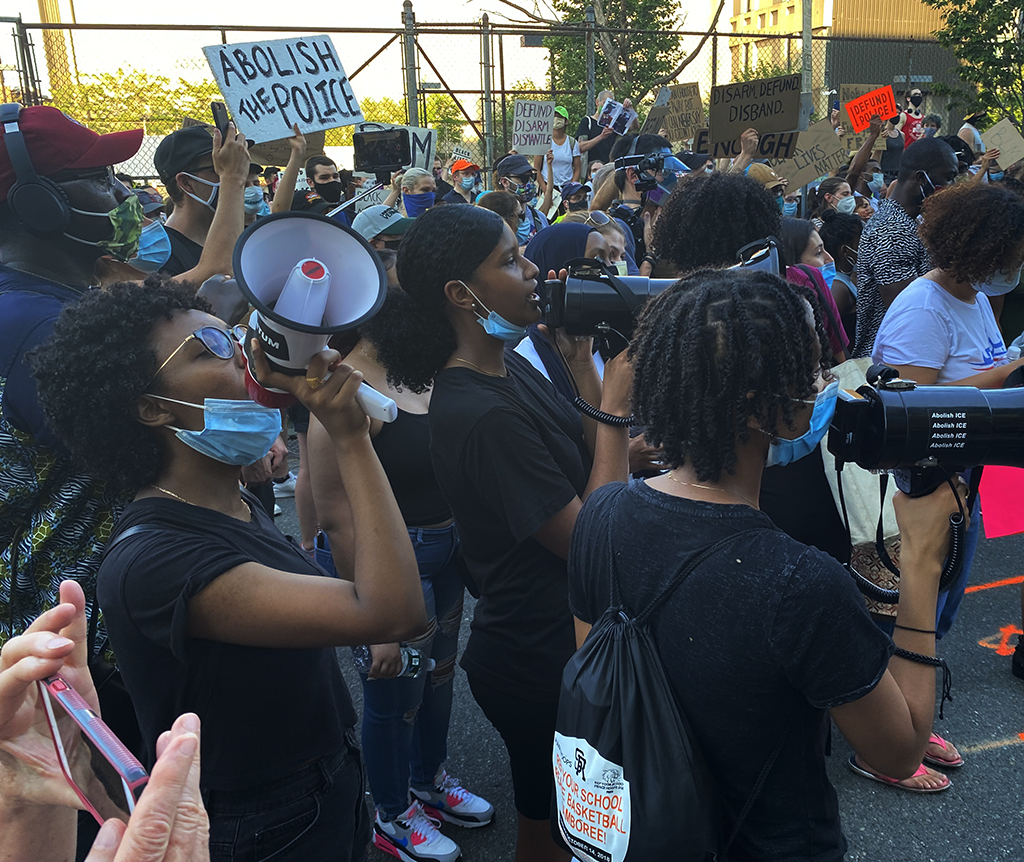 The rally and march arrived as the regularity of fireworks protests have diminished. For most nights in the past weeks, fireworks have begun at 8:46 p.m. and continued for hours, a reminder of the length of time a Minneapolis police officer stayed kneeling on Floyd’s neck until he was dead. (Prosecutors now say the killing was shorter by one minute.) “They’ll start at 8:46 and go into the wee hours of the morning. And, you know, that’s where it becomes pretty problematic. If it was for 10 minutes or so right before nine o’clock, I think we all could sustain it,” Bard said of the fireworks Monday when addressing city councillors.

Though fireworks complaints are up 1,000 percent, he said, police response is limited: “Folks think that we can go there and arrest individuals for using firecrackers,” Bard said, “and we can’t. It’s a $100 citation.”

The discomfort, though, is exactly the point, protesters say of the fireworks displays. The relentless sound, which might be mistaken for gunfire, is a reminder of what some neighborhoods experience with actual ammunition. The Port neighborhood suffered an epidemic of gunfire incidents in 2018.