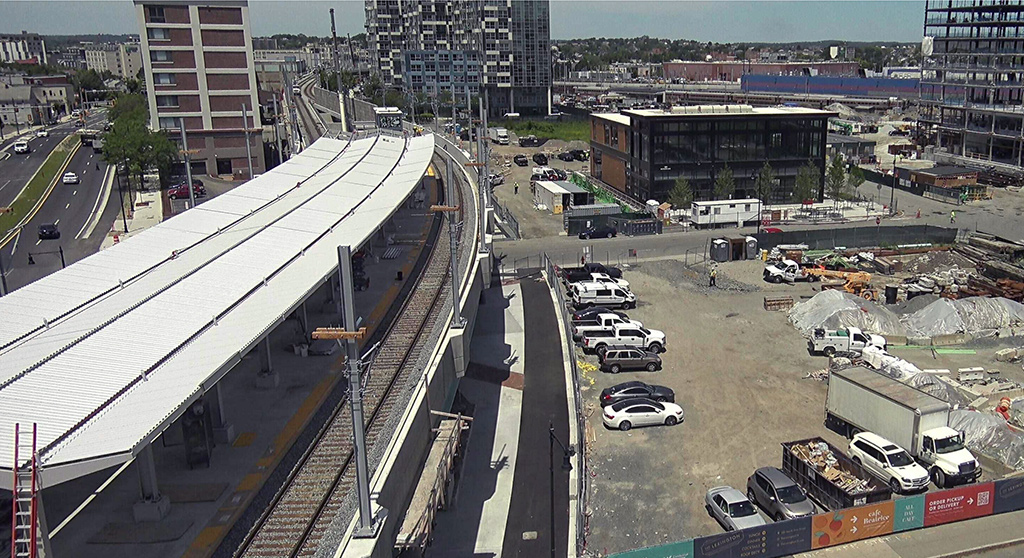 The site of the Lechmere elevated station in North Point, seen this month. (Photo: MBTA)

Delays to the green line extension project will push the start of service back by two months at the Union Square spur – to December, MBTA officials say. There will be a five-month delay on the stretch ending at a Medford/Tufts station, which is now expected to open in May.

There’s also a December service launch planned for the Lechmere station, which is being relocated across Monsignor O’Brien Highway to North Point from East Cambridge.

Officials at a Financial Management Control Board meeting blamed the coronavirus pandemic for the delays and resulting added cost. “As much as we feel Covid-19 is in the rearview mirror, from a project perspective we’re not there yet,” said John Dalton, the MBTA’s project manager for the green line extension project. “There is a time impact associated with Covid-19. With additional time comes additional costs.”

The board voted unanimously to approve the delays and a request for up to $80 million to close out the project. The additional funds will not only finish the project by May but also “substantially reduce” the risk of litigation related to Covid-19, Dalton said. That financial risk will now be held by GLX Constructors, the joint venture that won the contract to build the extension.

The MBTA also announced that Cambridge and Somerville would not have to pay their $25 million and $50 million commitments, respectively, made in 2016 to keep the green line extension project alive. The “unprecedented” arrangement, in Somerville Mayor Joe Curtatone’s words, helped stabilize plans for the extension when budget concerns nearly derailed the project.

The transit agency now expects to be able to return the money paid by Cambridge and Somerville once the project is fully completed. “Barring something unforeseen, we’ll get the money we paid out and be able to do more for our communities,” said Curtatone, who was asking in April to get the money back when it was obvious finances at the agency had turned around.

Cambridge has already paid $15 million of its commitment. Though it did not formally ask for its money back, staff was aware that the state was considering refunding some or all of the municipal contributions, said Lee Gianetti, the city’s director of communications and community relations. “The City’s agreement with MassDOT and the MBTA includes a requirement for partial or full reimbursement if the project is completed under budget,” he said.

Once final information on the green line extension projects is received, the city will develop a refund plan with the North Point neighborhood developer DivcoWest, which also contributed to the project also, Gianetti said.

Completing the project has been a major focus for the Massachusetts Bay Transportation Authority. Seven years after the original completion date, the MBTA reports that work is 80 percent complete and testing to certify the tracks for operation is underway, according to a presentation released Monday.

This post was updated June 25, 2021, with information from Cambridge spokesman Lee Gianetti.